Experimental results on scour at abutments under unsteady clear water flow condition are presented. Three shapes of short abutments (abutment length/upstream flow depth < 1) were tested, namely, rectangular/vertical wall, semi-circular, and trapezoidal/45° wing-wall abutments embedded in uniform sands of two sizes having d50 = 0.52 mm and 0.712 mm. The unsteadiness of the flow is considered in the form flood hydrographs of three forms, namely: advanced flood hydrograph (Type I), symmetrical flood hydrograph (Type II), and delayed flood hydrograph (Type III) with the flow maintained at clear water condition in all cases. The experimental findings are used to represent the influence of various parameters on scour depth at bridge abutments. It was observed that the scour depth at rectangular abutments is greater than that at trapezoidal and semi-circular abutments. The scour depths at abutments embedded in finer sediments are greater than those in coarser sediments. In addition, based on the study of effect of three flood hydrographs, it was noticed that the delayed flood hydrograph yields greater scour depth as compared to the other two cases. Further, based on the method of superposition and the correction of shape factor, a semi-empirical model using dimensionless parameters is proposed to compute the temporal evolution of scour depth at abutments under unsteady clear water conditions. The parameters used in this model include flow shallowness, flow intensity, sediment coarseness, and time factor. It was found that the proposed model corresponds well with the data of time-dependent scour depth in uniform sediments obtained from the present experiments (unsteady flows) and reported by different investigators (steady flows). View Full-Text
Keywords: bridge; abutments; scour; sediment transport; unsteady flow; hydraulics bridge; abutments; scour; sediment transport; unsteady flow; hydraulics
►▼ Show Figures 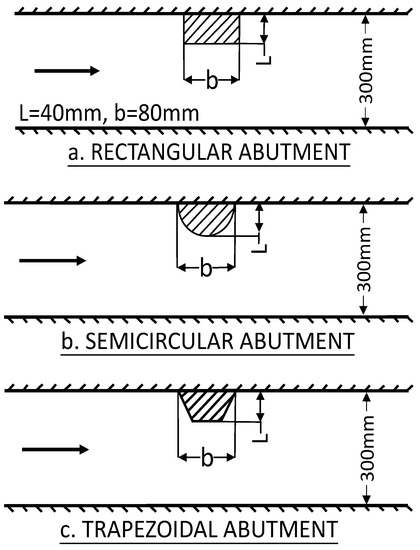