Machine Learning to Evaluate Impacts of Flood Protection in Bangladesh, 1983–2014

Six bias correction (BC) methods; delta-method (DT), linear scaling (LS), power transformation of precipitation (PTR), empirical quantile mapping (EQM), gamma quantile mapping (GQM) and gamma-pareto quantile mapping (GPQM) were applied to adjust the biases of historical monthly precipitation outputs from five General Circulation Models (GCMs) dynamically downscaled by two Regional Climate Models (RCMs) for a total of seven different GCM-RCM pairs over Costa Rica. High-resolution gridded precipitation observations were used for the control period 1951–1980 and validated over the period 1981–1995. Results show that considerable biases exist between uncorrected GCM-RCM outputs and observations, which largely depend on GCM-RCM pair, seasonality, climatic region and spatial resolution. After the application of bias correction, substantial biases reductions and comparable performances among most BC methods were observed for most GCM-RCM pairs; with EQM and DT marginally outperforming the remaining methods. Consequently, EQM and DT were selectively applied to correct the biases of precipitation projections from each individual GCM-RCM pair for a near-future (2011–2040), mid-future (2041–2070) and far-future (2071–2100) period under Representative Concentration Pathways (RCPs) 2.6, 4.5 and 8.5 using the control period 1961–1990. Results from the bias-corrected future ensemble-mean anticipate a marked decreasing trend in precipitation from near to far-future periods during the dry season (December, January, February (DJF) and March, April, May (MAM)) for RCP4.5 and 8.5; with pronounced drier conditions for those climatic regions draining towards the Pacific Ocean. In contrast, mostly wetter conditions are expected during the dry season under RCP2.6, particularly for the Caribbean region. In most of the country, the greatest decrease in precipitation is projected at the beginning of the rainy season (June, July, August (JJA)) for the far-future period under RCP8.5, except for the Caribbean region where mostly wetter conditions are anticipated. Regardless of future period, slight increases in precipitation with higher radiative forcing are expected for SON excluding the Caribbean region, where precipitation is likely to increase with increasing radiative forcing and future period. This study demonstrates that bias correction should be considered before direct application of GCM-RCM precipitation projections over complex territories such as Costa Rica.
Keywords: bias-correction; climate-change; GCM; RCM; RCP; precipitation bias-correction; climate-change; GCM; RCM; RCP; precipitation
►▼ Show Figures 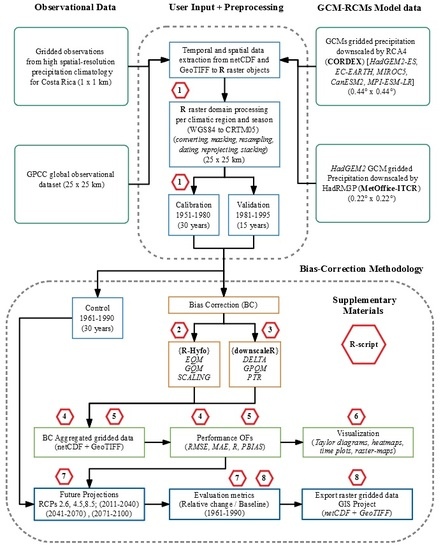