Quality and representative precipitation data play an essential role in hydro-meteorological analyses. However, the required reliability and coverage is often unavailable from conventional gauge observations. As a result, globally available precipitation datasets are being used as an alternative or supplementary to gauge observations. In this study, the accuracy of three recently released, high-resolution precipitation datasets with a spatial resolution of 0.1° and a daily temporal resolution is evaluated over the Upper Blue Nile River Basin (UBNRB) for the period of 2007 to 2016. The datasets are Integrated Multi-satellitE Retrievals for GPM version 6 (IMERG6), Multi-Source Weighted-Ensemble Precipitation version 2.2 (MSWEP2.2) and soil moisture to rain using Advanced SCATterometer version 1.1 (SM2RAIN-ASCAT1.1). The comparison was made between rain gauge observations and two other high-resolution precipitation datasets named Enhancing National Climate Services (ENACTS) and Climate Hazards Group Infrared Precipitation with Stations version 2 (CHIRPS2). The modified Kling-Gupta efficiency (KGE’) and four categorical indices named probability of detection (POD), false alarm ratio (FAR), critical success index (CSI), and frequency bias (fBIAS) was used to measure the skills of each dataset. Results revealed that, except SM2RAIN-ASCAT1.1, all other datasets show a better ability on a monthly time scale for areas with an elevation below 1500 m above sea level (m.a.s.l). The overall performance was better in the wetter months of March to August than the drier months of September to February. Besides, all products including SM2RAIN-ASCAT1.1 could detect no rain events (rain < 1 mm) correctly, but their skill deteriorates on identifying higher intensity events. By comparison, ENACTS (calibrated with most quality gauges of Ethiopia) and CHIRPS2 exhibited the best performance due to their high-resolution nature and inclusion of physiographic information in their data generation procedures. IMERG6 and MSWEP2.2 showed the next best performance according to both the continuous and categorical indices used. SM2RAIN-ASCAT1.1 demonstrates the least skill everywhere due to problems that could be associated with misinterpretations of soil moisture signals by the SM2RAIN algorithm. Considering the scarcity of gauged datasets over UBNRB, IMERG6 and MSWEP2.2 could be regarded as valuable datasets for hydro-climatic analysis, mainly where gauge density is low. SM2RAIN-ASCAT1.1, on the other hand, needs significant bias correction to treat its apparent wet biases before any application. View Full-Text
Keywords: IMERG; MSWEP; SM2RAIN; Upper Blue Nile; precipitation IMERG; MSWEP; SM2RAIN; Upper Blue Nile; precipitation
►▼ Show Figures 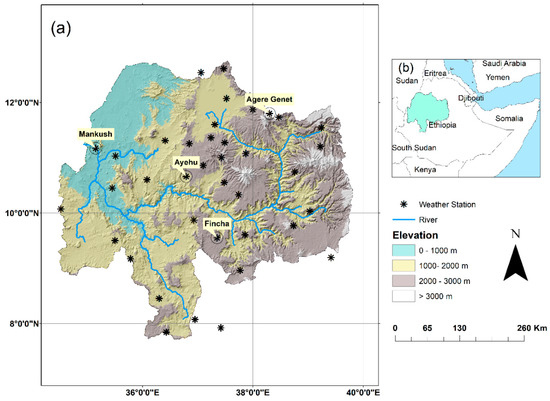