This study aimed to analyze the probability of the occurrence of dry/wet spell rainfall using the Markov chain model in the Upper Awash River Basin, Ethiopia. The rainfall analysis was conducted in the short rainy (Belg) and long rainy (Kiremt) seasons on a dekadal (10–day) scale over a 30-year period. In the Belg season, continuous, three-dekad dry spells were prevalent at all stations. Persistent dry spells might result in meteorological, hydrological, and socio-economic drought (in that order) and merge with the Kiremt season. The consecutive wet dekads of the Kiremt season indicate a higher probability of wet dekads at all stations, except Metehara. This station experienced a short duration (dekads 20–23) of wet spells, in which precipitation is more than 50% likely. Nevertheless, surplus rainwater may be recorded at Debrezeit and Wonji only in the Kiremt season because of a higher probability of wet spells in most dekads (dekads 19–24). At these stations, rainfall can be harvested for better water management practices to supply irrigation during the dry season, to conserve moisture, and to reduce erosion. This reduces the vulnerability of the farmers around the river basin, particularly in areas where dry spell dekads are dominant. View Full-Text
Keywords: Markov chain model; dry/wet spell; rainfall probability; Upper Awash River Basin Markov chain model; dry/wet spell; rainfall probability; Upper Awash River Basin
►▼ Show Figures 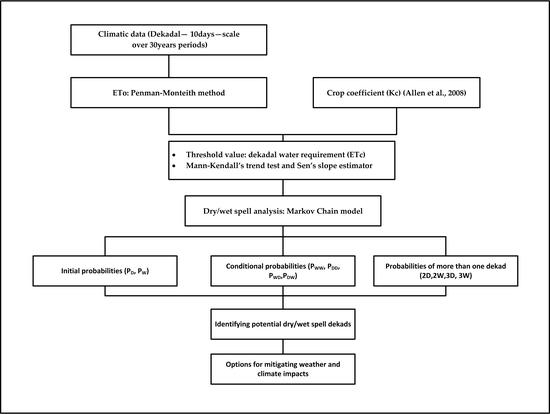