This article reveals the change law of the head loss and critical deposition velocity during hydraulic transmission of a solid–liquid two-phase pipeline. This article also establishes a physical test model. A single variable is used to conduct the experimental research by changing the conditions of the pipeline flow rate, the sediment concentration, and the reverse slope degree. Based on an analysis of the test process, a new formula is proposed to determine the critical sedimentation rate of the pipeline that considers a change in the adverse slope. By analyzing the variation rule of the hydraulic slope of the pipeline sediment in different states and comparing the hydraulic slope of the horizontal pipeline and reverse pipeline in different states, different factors that influence head loss are revealed. Finally, the measured value of this test is compared with the Durand equation and the Worster equation. It was found that the measured value of this test was more similar to the Durand equation. This study not only provides theoretical support for sand removal in pipelines but also promotes sedimentation in reservoirs.
Keywords: inverse slope pipeline; critical flow velocity; reservoir sedimentation; hydraulic gradient inverse slope pipeline; critical flow velocity; reservoir sedimentation; hydraulic gradient

Reservoir projects on sandy rivers inevitably face the problem of sediment deposition [1,2]. Sedimentation influences the normal operation and service life of a reservoir, which causes serious events, such as the abandonment of reservoirs and dam breaking accidents [3,4,5,6]. In the Yellow River Basin and northwest China, in particular, reservoir siltation has been the most prominent problem [7,8,9]. Reservoir sedimentation and desilting have become urgent problems and have attracted the attention of governments and water conservancy departments.
To reduce siltation in reservoirs, many reservoirs discharge silted sediment out of the reservoir by means of flood discharge, a density current, and the emptying of reservoirs. In addition, the water head difference between the upper and lower reaches of the reservoir is used to discharge sediment in pipelines. [10]. Sediment delivery is restricted by the topography of the sediment in front of the dam, inflow flow, outflow flow, fine sediment content, and the water level in front of the dam. The discharged sediment can be only a portion of the retained sediment in front of the dam. Pipeline sediment delivery is more flexible than reservoir operations, the desilting area can be expanded, and the desilting effect can be improved by reasonably arranging the desilting pipeline [11,12,13,14].
Self-priming pipeline sediment discharge is an engineering technique for reservoir pipeline sediment discharge that uses the natural water head of the reservoir and does not need external dynamic conditions [15,16]. An underwater pipe drainage system with a suction head is installed in the reservoir area to discharge the sediment deposited in the reservoir area. A reservoir self-priming pipeline uses the natural water head of the reservoir without external dynamic conditions, and an underwater pipeline desilting system with a suction head is set up in the reservoir area. During the process of pipeline layout, an adverse slope section will appear due to the influence of the dam body. Wang [17] found that in the reverse slope section of a reservoir self-priming pipeline, because the sinking direction of the heavy solid material moves in the opposite direction of flow, it is often the portion part that has a high occurrence of pipe plugging. If the sediment in the reservoir has been silted for a long time, the sediment is a severe concretion [18,19,20,21].
In the design of a mud transportation pipeline, to prevent pipeline silting and ensure transportation safety, the design of the pipeline transportation velocity must be greater than the critical non-silting velocity. The critical non-silting velocity, however, is typically determined according to the data of the downslope or the flat slope, and the calculated value is often small when applied to the reverse slope section. From the perspective of an engineering application, the two most important problems in the research of pipeline sediment transport are as follows: (1) the effect of sediment on flow energy consumption and (2) the law of sediment deposition during the process of pipeline transportation. To solve the problem of silting and blocking in pipeline transportation, it is necessary to recognize the law of sediment transport in the reverse pipe section.
This study focuses on the engineering technology demand of mud and clay block transportation in a reverse slope pipe section in a self-priming pipeline desilting project. The present study (1) examines the transport law of sediment (or clay block) using the flow in the pipe section with an adverse slope and (2) determines the relationship between sediment (or clay block) and water flow under different pipe slopes. The results provide a scientific and reasonable design basis for the layout of sediment discharge pipelines in a reservoir desilting project.

The right end of the steel tube was the horizontal section of the glass tube. In the horizontal section of the glass tube, pressure sensor channels 1, 2 and 3 were arranged. Five measuring points on the reverse slope section were also arranged, namely, channels 4, 5, 6, 7 and 8. Because channel 8 was affected by turbulence and negative pressure, it was abandoned. An opening was constructed along the top portion of the reverse slope section where the hose met the channel and the rubber hose was inserted. This was done if the Dong-Hua Test Real Time Data Measurement Analysis Software System (DHDAS) had to be cleared; if not, it was opened and clamped the rest of the time (Figure 2).

The reverse slope pipeline (30°, 45°, and 60°) was selected for this study. The sediment concentration ranged from 0 to 270 kg/m3, and the interval of sediment concentration in each group was 30 kg/m3 (Table 2). The flow meter used was an electromagnetic flow meter. The current flow value could be read directly through the electromagnetic flow meter screen after electrification. The range of the flow meter was 0–38 L/s, and the accuracy was 0.01 L/s. A frequency converter was used for flow control. This offered the advantages of energy savings and high precision to fully open the valve and adopt the frequency converter for flow control. The frequency adjustment range of the frequency converter was 0–50 Hz, and the accuracy was 0.001 Hz.
The experimental steps were as follows.

(1)
Prior to the experiment, the appropriate amount of sand was added, the blender was started, and the mixture was stirred for half an hour. This ensured that the sediment content in all portions of the mixer reached the same level.
(2)
The valve was then opened, and the motor (to drive the pump) was started. This flushed the silt into the glass tube, and then the motor and valve were closed.
(3)
Because a siphon formed in a section behind the highest point, the hose was loosened at the upper portion of channel 8. Note, however, that the highest point of the water level had to be higher than the position of channel 7.
(4)
The DHDAS system was opened, and the upper hose of channel 8 was closed after the pressure was cleared at each measuring point in the tube.
(5)
At the same time, the motor and valve were opened to produce a large flow rate so that the sediment in the measuring section of the pipe would not accumulate. Photos were taken, and the phenomenon and flow rate were recorded. The sediment concentration was measured using a specific gravity bottle, and the DHDAS system was used to measure the pressure at each channel in the pipe.
(6)
The motor was adjusted, and the flow rate was reduced to only one test section deposition, two depositions, and three depositions in the tube; step (5) was then repeated.
(7)
The motor was turned off, the mixer was turned off, the video and data were backed up, and the tests were transferred to a hard disk.

When the initial flow was high, no deposition occurred in the tube, and the flow was uniformly and slowly adjusted down. We observed whether or not the sediment in the observation section of the tube remained stationary and recorded the current flow (deposition flow). Critical deposition rate was calculated as follows: where Uc is the critical deposition rate (m/s); Q is the sedimentation flow (measured values based on the physical model, m/s3) and π = 3.141.
In this study, the calculated values of the four classical critical deposition velocity equations were compared with the measured values (Table 3).
The reverse slope pipe head loss was calculated using the Durand and GiBert [26] equations as follows: where ih is the horizontal pipe slurry head loss (kPa/m); θ is the inverse slope angle (°) and the other symbols have the same meaning as described previously.
Woester and Denny [27] found that the head loss of the solid–liquid two-phase flow in the inclined pipe was equal to the head loss of a vertical pipe and horizontal pipe connected with an inclined pipe as follows: where the symbols have the same meaning as noted earlier.

3.2. The Calculation of the Critical Deposition Rate

3.4. Influence Factors of the Head Loss in Pipe Sand Transportation

Sediment deposition is an inevitable problem of reservoir engineering on sandy rivers. A large amount of sediment deposition will directly affect the normal operation and service life of a reservoir, and even cause serious events such as reservoir scrapping and dam breaks. According to the physical model, the order of critical deposition velocities at different measuring points was, turning section > horizontal section > reverse slope section. There was an optimal angle between the horizontal section and the reverse slope section, which made the critical deposition velocity reach the maximum values. The critical deposition velocities of the horizontal section, turning section, and reverse slope section were directly proportional to the sediment concentration. In the current study, the Wasp equation was modified based on the measured data, and the calculated values of the modified equation were in good agreement with the measured values.
This study examined the engineering technical requirements of sediment transport in the reverse slope section of a self-priming pipeline. The law of sediment transport with water flow in a reverse slope pipe section was studied. The interaction mechanism between sediment and water flow under different pipeline slopes was revealed. This study provides a scientific and reasonable design basis for the distribution of sand discharge pipelines for reservoir dredging projects. 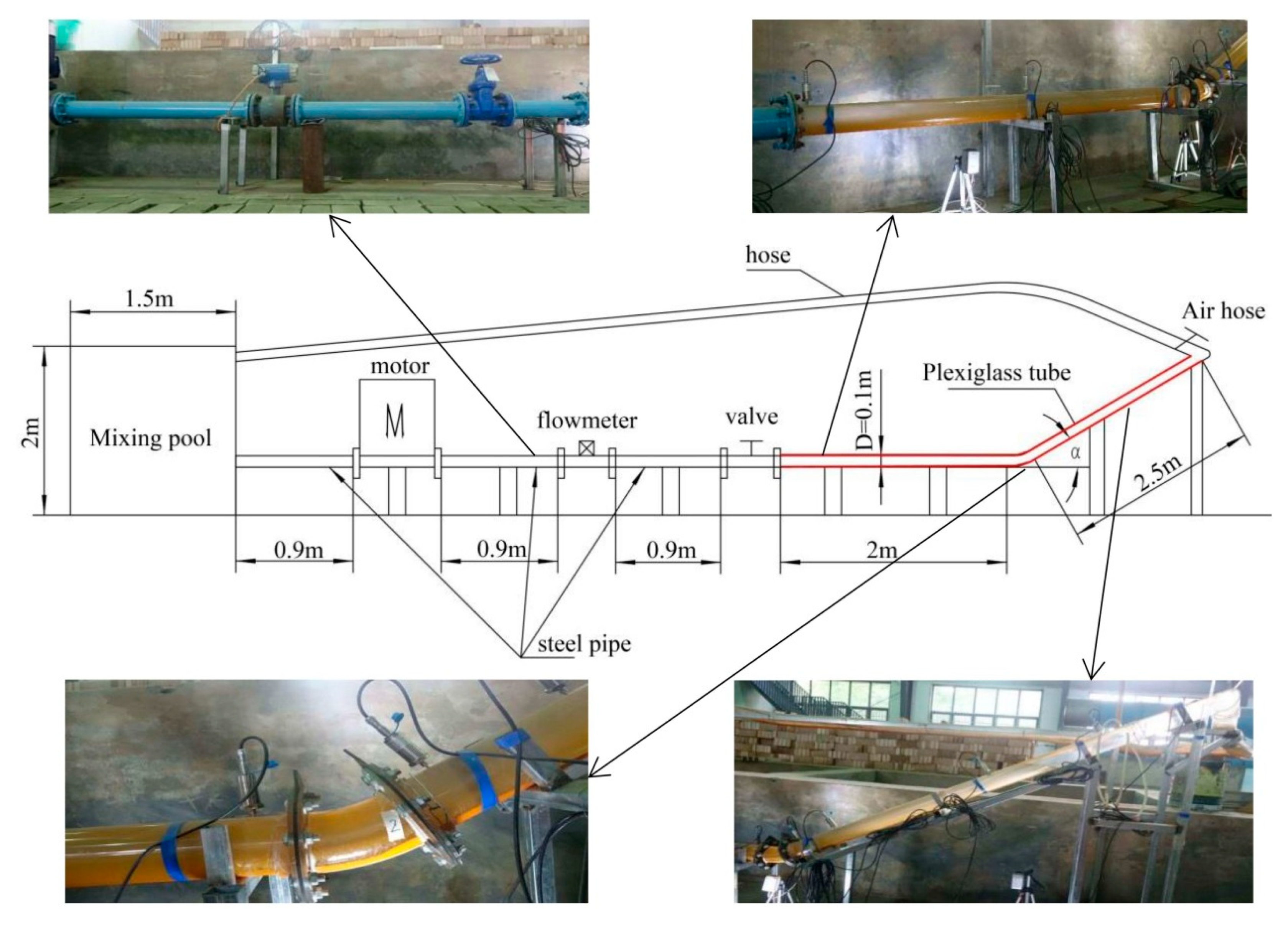 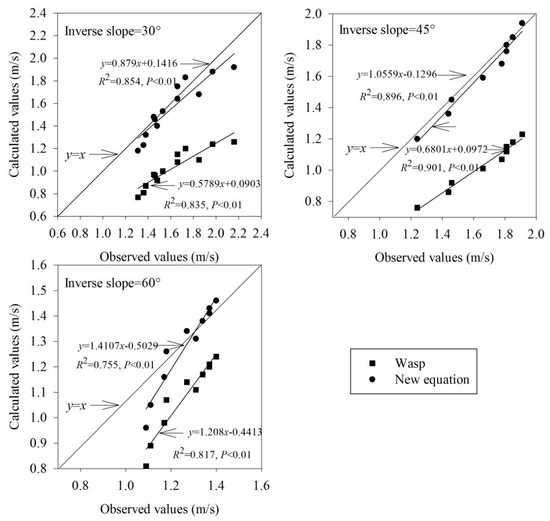 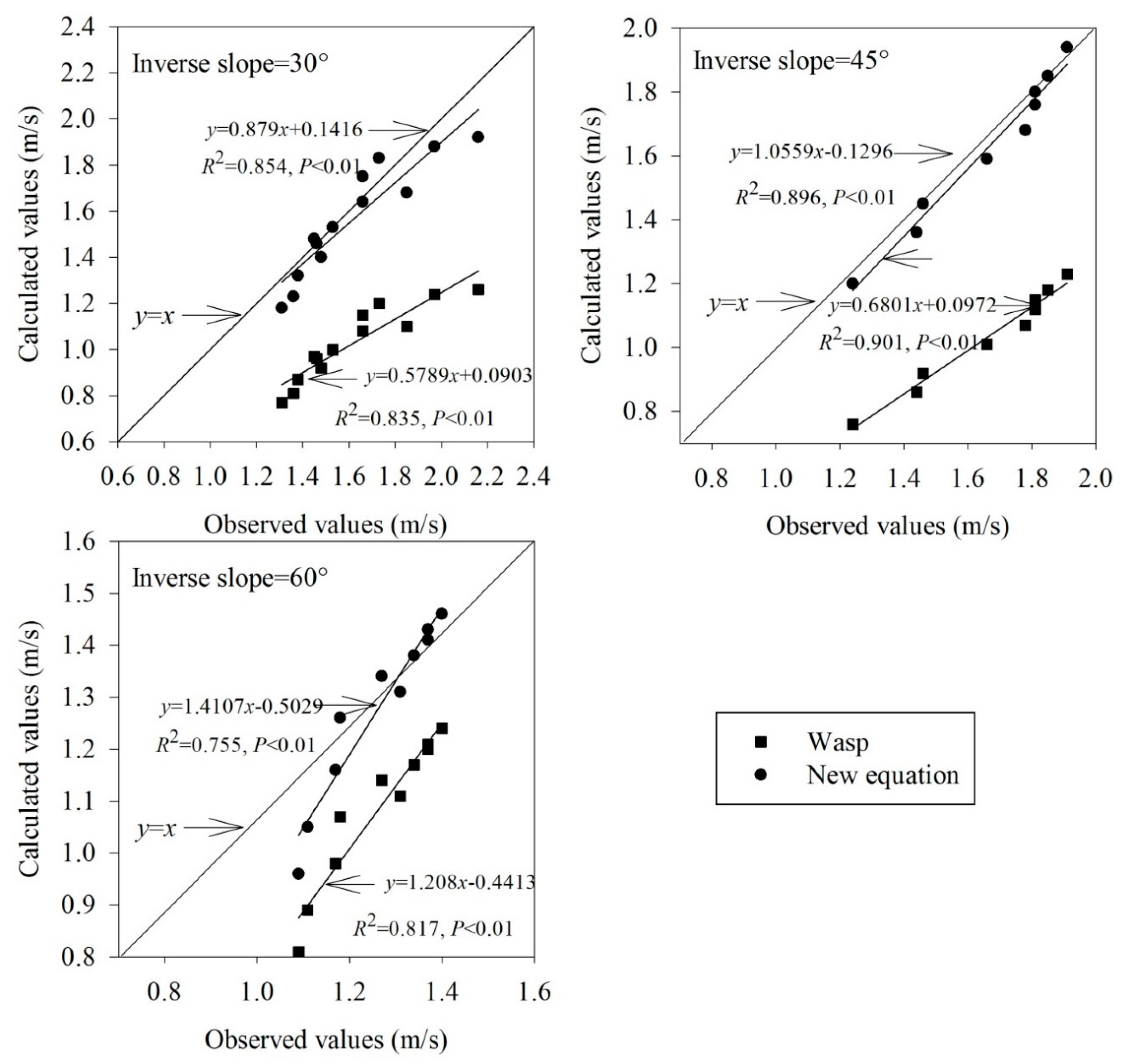