Understanding the variations of future drought under climate warming can provide the basis for mitigation efforts. This study utilized the standardized precipitation evapotranspiration index (SPEI), empirical mode decomposition (EMD) and empirical orthogonal function analysis (EOF) to predict the spatiotemporal variation of future drought under the representative concentration pathway RCP4.5 and RCP8.5 scenarios within the Mongolian Plateau over the period 2020–2100. The SPEI was computed using temperature and precipitation data generated by the fifth stage of the Coupled Model Intercomparison Project (CMIP5). The results under both the RCP4.5 and RCP8.5 scenarios showed increasing changes in temperature and precipitation. Both scenarios indicated increases in drought, with those under RCP8.5 much more extreme than that under RCP4.5. Under both scenarios, the climate showed an abrupt change to become drier, with the change occurring in 2041 and 2054 for the RCP4.5 and RCP8.5 scenarios, respectively. The results also indicated future drought to be more extreme in Mongolia than in Inner Mongolia. The simulated drought pattern showed an east–west antiphase and a north–south antiphase distribution based on EOF. The frequency of drought was higher under RCP8.5 compared to that under RCP4.5, with the highest frequencies under both scenarios occurring by the end of the 21st century, followed by the mid-21st century and early 21st century. The findings of this research can provide a solid foundation for the prevention, early warning and mitigation of drought disasters within the context of climate change in the Mongolian Plateau. View Full-Text
Keywords: future drought; SPEI; CMIP5 models; RCP scenario; Mongolian Plateau future drought; SPEI; CMIP5 models; RCP scenario; Mongolian Plateau
►▼ Show Figures 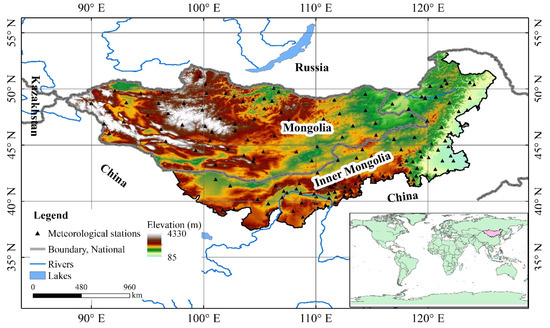