This study provides an up-to-date analysis of climate change over the Salento area (southeast Italy) using both historical data and multi-model projections of Regional Climate Models (RCMs). The accumulated anomalies of monthly precipitation and temperature records were analyzed and the trends in the climate variables were identified and quantified for two historical periods. The precipitation trends are in almost all cases not significant while the temperature shows statistically significant increasing tendencies especially in summer. A clear changing point around the 80s and at the end of the 90s was identified by the accumulated anomalies of the minimum and maximum temperature, respectively. The gradual increase of the temperature over the area is confirmed by the climate model projections, at short—(2016–2035), medium—(2046–2065) and long-term (2081–2100), provided by an ensemble of 13 RCMs, under two Representative Concentration Pathways (RCP4.5 and RCP8.5). All the models agree that the mean temperature will rise over this century, with the highest increases in the warm season. The total annual rainfall is not expected to significantly vary in the future although systematic changes are present in some months: a decrease in April and July and an increase in November. The daily temperature projections of the RCMs were used to identify potential variations in the characteristics of the heat waves; an increase of their frequency is expected over this century. View Full-Text
Keywords: trend analysis; climate change; Regional Climate Model; accumulated anomalies; climate change scenarios trend analysis; climate change; Regional Climate Model; accumulated anomalies; climate change scenarios
►▼ Show Figures 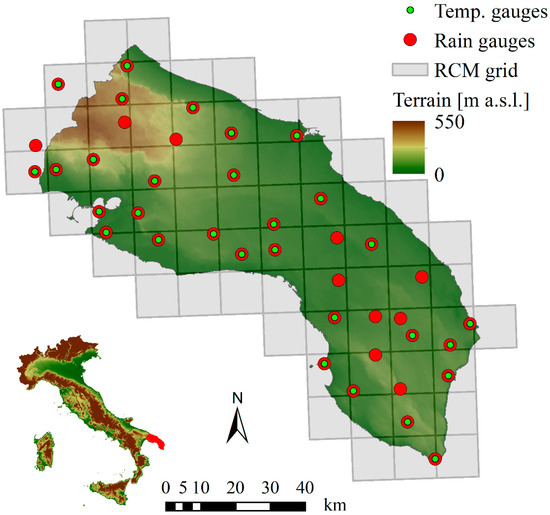