Solute runoff and leaching are two direct pathways of nutrient pollution from paddy fields into water systems. Due to the dynamic nature of paddy fields, solute transport and transformation processes are complex and difficult to understand. Therefore, in this study, nitrogen (N) transport in flooded paddy rice fields with conventional irrigation (flooding irrigation) in the Tanjung Karang Rice Irrigation Scheme (TAKRIS), Sawah Sempadan, were observed and modelled using the Hydrus-1D numerical model during two consecutive rice growing seasons. Based on solute transport analysis results, it was observed that 50.3% to 48% of percolated N was accumulated in the top 40-cm soil layer, while 49.7% to 52% of leachate N was lost below the 40-cm soil layer (40–100 cm) during the off and main seasons, respectively. About 85% of N leaching loss was in the form of NO3−. NO3− was absorbed by rice roots within 0–40 cm and the denitrified root zone; however, there was still a large quantity of NO3− which remained below the root zone, which was quickly transported downward along with the leachate water. The NH4+ concentration in subsurface water was lower than the NO3− concentration due to various processes that removed NH4+ from the topsoil layer (0–40 cm), such as ammonium volatilisation, nitrification, and plant uptake. The total leaching loss of N was 34.9 and 27.9 kg/ha during the off and main seasons, respectively. The simulated and observed water flow and nutrient leaching were in a good agreement (R2 = 0.98, RMSE = 0.24). The results showed that Hydrus-1D successfully simulated the solute movement under different soil depths during the study period. View Full-Text
Keywords: solute transport; Hydrus-1D; leaching losses; TAKRIS solute transport; Hydrus-1D; leaching losses; TAKRIS
►▼ Show Figures 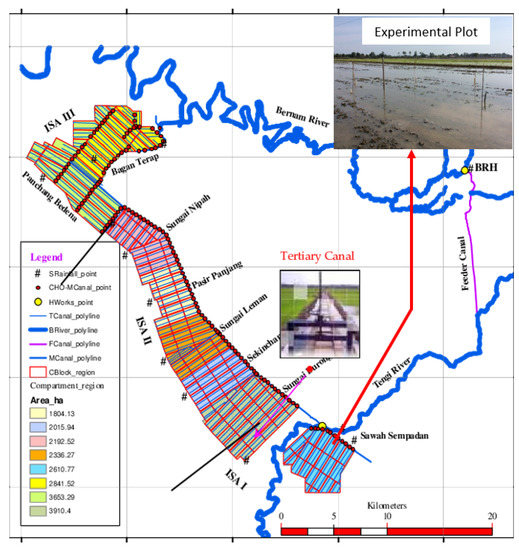