We present a detailed study of the snowpack trends in the Rocky Mountain National Park (RMNP) using snow telemetry and snow course data at a monthly resolution. We examine the past 35 years (1981 to 2016) to explore monthly patterns over 36 locations and used some additional data to help interpret the changes. The analysis is at a finer spatial and temporal scale than previous studies that focused more on aggregate- or regional-scale changes. The trends in the first of the month’s snow water equivalent (SWE) varied more than the change in the monthly SWE, monthly precipitation or mean temperature. There was greater variability in SWE trends on the west side of the study area, and on average the declines in the west were greater. At higher elevations, there was more of a decline in the SWE. Changes in the climate were much less in winter than in summer. Per decade, the average decline in the winter precipitation was 4 mm and temperatures warmed by 0.29 °C, while the summer precipitation declined by 9 mm and temperatures rose by 0.66 °C. In general, November and March became warmer and drier, yielding a decline of the SWE on December 1st and April 1st, while December through February and May became wetter. February and May became cooler. View Full-Text
Keywords: spatial and temporal variability; fine scales; snow water equivalent spatial and temporal variability; fine scales; snow water equivalent
►▼ Show Figures 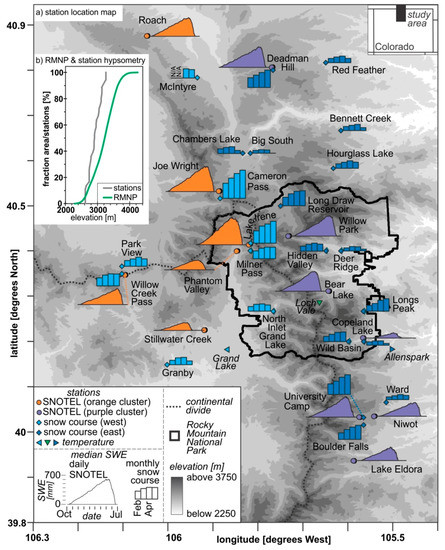