A 60-Minute Design Rainstorm for the Urban Area of Yangpu District, Shanghai, China

The inevitable trend of global climate change has brought about considerably frequent occurrences of extreme climate events [1,2,3,4]. Recently, under the influence of typhoons, urban floods caused by rainstorms have exerted great harm on the safety of society. In order to ensure the safety and continued operation of cities under extreme climate conditions, the Chinese government is making every effort to solve the problem of urban flooding by constructing and maintaining drainage pipelines. In order to determine the slope and diameter of the pipeline when designing drainage pipelines, models that simulate urban waterlogging are developed. Rainfall is the input of most kinds of hydrological and hydraulic models, whose accuracy and resolution directly affect the correctness of the model output [5,6]. Usually, a design rainstorm with a given return period is used in such models. The total rainfall amount, with specific duration, can be calculated through frequency analysis. In early studies, a hyetograph was assumed to be uniformly distributed on both spatial and temporal scales [7]. However, this assumption is in conflict with reality because in most rainfall events the rainfall intensity is always variable during the whole process [8]. Therefore, the refinement of the temporal and spatial patterns of hyetographs is more conducive to forecasting urban floods.
The precipitation data obtained by rain gauges only account for observation at one point. In order to study the total rainfall amount in a region, areal rainfall should be calculated. The calculation of areal rainfall is normally carried out through the transformation from “point” to “area” by means of various interpolation methods. Conventional areal rainfall estimation methods are the arithmetic average method, Thiessen polygon techniques, the isohyetal method, and the grid method. Nowadays, the development of remote sensing has brought rainfall data from weather radars and satellites with much higher coverage and finer resolution, which makes the calculation of areal rainfall more accurate and convenient [9,10,11]. Examples of such products are TRMM, 3B42/3B43, CMORPH, PERSIANN, TAMSA, and RFE2.0.
Research into design hyetographs with varying temporal patterns started in the early 20th century. There are several classic and widely used methodologies to derive hyetographs. In 1937, Mo et al. [12] analyzed 800 rainfall events in the former Soviet Union and summarized seven types of hyetographs. They are well-known as “mode hyetographs”. Keifer and Chu [13] proposed a method which is based on an intensity–duration–frequency (IDF) curve and a rainstorm intensity formula. This method is known as the Chicago rainstorm method. Huff [14] divided rainfall events into four classes based on which quarter of the duration the peak falls in. The hyetograph is then derived from quantiles of rainfall events within each class in a different period. Pilgrim and Cordery [15] developed an order-average hyetograph based on the principle of statistics (referred to as the P&C method). It places the peak of the rainfall in the period where it is most likely to happen. For a small drainage area that is below 10 mi2, Yen and Chow [16] proposed a triangular-shaped hyetograph. The position of the peak is determined by the dimensionless first-order moment of the rainstorm event. The Natural Resources Conservation Service (NRCS) [17] developed a synthetic hyetograph, utilizing 6 h and 24 h rainstorm data from the US, which is called a “Soil Conservation Service (SCS) hyetograph”. There are four basic types of SCS hyetographs, each of them accounting for a specific region and climate. Besides the above-mentioned classic methods, there are also newly-developed methods to derive hyetographs; refer to Cheng et al. [18], Lin and Wu [19], Powell et al. [20], Lee and Ho [21], and Kottegoda [22] for detailed descriptions.
The classification of seven mode hyetographs is simple and distinct. Among them, Types I, II, and III are single-peak hyetographs, with peak falls at the beginning, middle, and end of the event; Type IV is uniformly distributed; V, VI, and VII are double-peak hyetographs with peaks falling at the beginning and end, beginning and middle, middle and end of the event, respectively. Visual estimation and fuzzy identification are often used for classification.
As the representative of statistical hyetographs, the P&C method is based on the statistical analysis of considerable rainfall data, and thus the derived hyetograph approximates the actual rainfall process. The simplicity of its principle and implementation makes it a convenient method. In most cases, all the rainfall events are used to derive one single hyetograph. However, the rainfall events may have a single peak, double-peaks, or multiple peaks. These rainfall events with different numbers of peaks will have different influences on the confluence process. If one mixes single-peak and multiple-peak rainfalls, the derived hyetograph is distorted to some extent. Therefore, in this study, a combination of mode hyetographs and the P&C method is proposed to derive single-peak hyetographs and double-peak hyetographs.
The main objectives of this study are: (1) to derive the design hyetographs for a 60-min rainstorm with different return periods in Yangpu District in order to serve as the input to an urban runoff model; (2) to explore the influences of separating single-peak and double-peak rainstorms in deriving hyetographs; (3) to compare the methodology of combining mode hyetographs and the P&C method with the classic design hyetograph method. The methodology and procedure used to derive hyetographs in this study can also be a reference for other small cities and regions.

Yangpu District in Shanghai, China, was selected as the study area. Shanghai is located in the Southeast of China. Yangpu District is in the central part of the city, and has an area of about 60 km2. The Huangpu River winds along the southeast side of the district. The subtropical monsoon climate results in an average annual precipitation of 1060 mm.

Because Yangpu District is in the downtown area, there are no adequate precipitation data inside the district. Therefore, precipitation data from three nearby stations: Gaoqiao, Yangjing, and Jiangwan (Figure 1) were used for areal rainfall estimation, frequency analysis, and the derivation of hyetographs. Due to the availability of the data, the annual maximum 60-min rainfalls from 1978 to 2015 in Gaoqiao and Yangjing were used for areal rainfall estimation and frequency analysis. The precipitation data from Jiangwan Station with 5 min intervals from 2001 to 2015 were used to derive the hyetographs. The duration for the hyetograph design was 60 min. The individual rainfall events were divided before designing the hyetograph. Different criteria for selecting inter-event times are reported in [23,24,25,26,27,28]. In this study, 120 min was selected as the inter-event time based on the regulations in China [29], by which the successive rainfall processes were divided into independent rainfall events. Rainfall events that exceed 16 mm in 60 min were selected (also based on the regulations in China) to derive the hyetographs, and in total 117 events were selected.

The steps of t P&C method [15] are as follows:
In this study, the time interval was selected as 5 min. Three scenarios were established in which hyetographs were derived:

With the change of climate, rainstorms caused by extreme weather events are becoming increasingly frequent. The time distribution of hyetographs, as the input to various hydrological models, exerts a critical influence on the output of the model. In this study, 60-min design rainstorms with return periods of 2, 5, 10, 20 years were derived for the urban area of Yangpu District. The design areal rainfall of different return periods was calculated based on frequency analysis using the method of L-moments. The rainfall events were initially classified into seven types of mode hyetographs and then used to derive the 60-min duration hyetograph by using the P&C method with respect to three scenarios: single-peak, double-peak, and general hyetographs. The derived hyetograph using the P&C method was compared with the classic Chicago rainstorm method. Based on the results, the following conclusions can be drawn:
In conclusion, rainstorms of different types have different distributions and thus have different influences on urban runoff models. It is recommended to derive hyetographs for each type of rainstorm separately, and then choose the most disadvantageous one as the input for waterlogging model (or other hydrological models).

This work was supported by Science and Technology Commission of Shanghai Municipality (Grant number: 15dz1207804) and National Natural Science Foundation of China (No. 51479061). The cost to publish in open access is covered by the above funding. The data is provided by Shanghai Hydrology Administration. 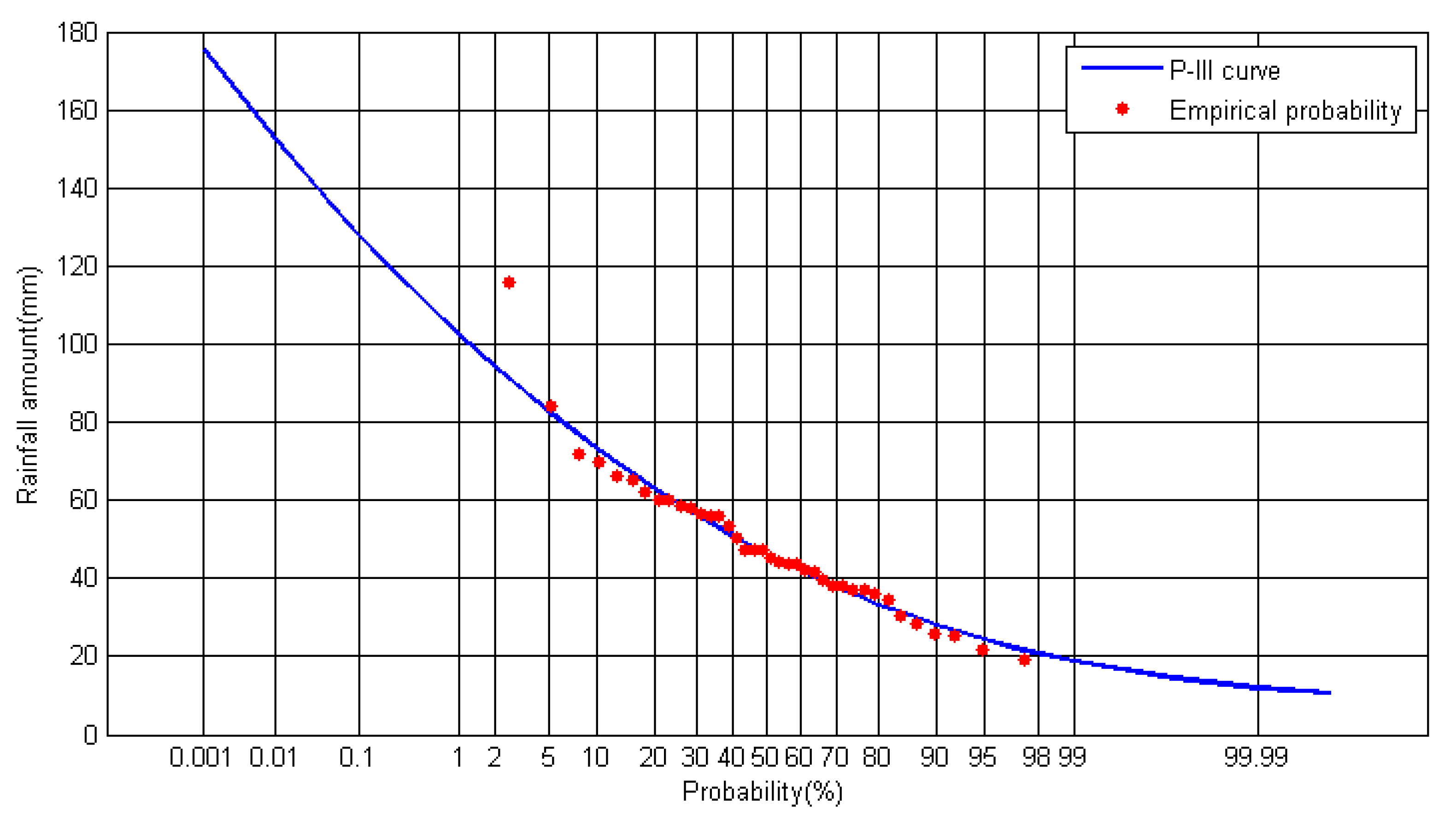