A Review of the Integrated Effects of Changing Climate, Land Use, and Dams on Mekong River Hydrology
Next Article in Special Issue

Ammonium Transformation in 14 Lakes along a Trophic Gradient

:
Ammonia is a widespread pollutant in aquatic ecosystems originating directly and indirectly from human activities, which can strongly affect the structure and functioning of the aquatic foodweb. The biological oxidation of NH4+ to nitrite, and then nitrate is a key part of the complex nitrogen cycle and a fundamental process in aquatic environments, having a profound influence on ecosystem stability and functionality. Environmental studies have shown that our current knowledge of physical and chemical factors that control this process and the abundance and function of involved microorganisms are not entirely understood. In this paper, the efficiency and the transformation velocity of ammonium into oxidised compounds in 14 south-alpine lakes in northern Italy, with a similar origin, but different trophic levels, are compared with lab-scale experimentations (20 °C, dark, oxygen saturation) that are performed in artificial microcosms (4 L). The water samples were collected in different months to highlight the possible effect of seasonality on the development of the ammonium oxidation process. In four-liter microcosms, concentrations were increased by 1 mg/L NH4+ and the process of ammonium oxidation was constantly monitored. The time elapsed for the decrease of 25% and 95% of the initial ion ammonium concentration and the rate for that ammonium oxidation were evaluated. Principal Component Analysis and General Linear Model, performed on 56 observations and several chemical and physical parameters, highlighted the important roles of total phosphorus and nitrogen concentrations on the commencement of the oxidation process. Meanwhile, the natural concentration of ammonium influenced the rate of nitrification (µg NH4+/L day). Seasonality did not seem to significantly affect the ammonium transformation. The results highlight the different vulnerabilities of lakes with different trophic statuses.
Keywords:
lab-microcosms; ammonium impact; nitrification; trophic degree; lake vulnerability 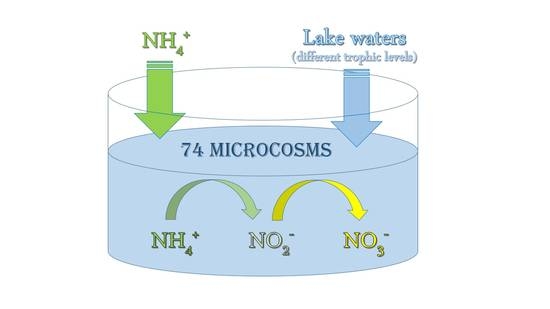 Total ammonia (TAN), in particular the unionized compound, is one of the major environmental pollutants in freshwater aquatic systems that is physiologically harmful to aquatic organisms and affects ecosystem functionality [1,2]. However, the threshold of ammonia toxicity varies widely, as there are sensitive and insensitive species. Nitrogen pollution in water has become a serious global environmental problem. It causes water eutrophication, stimulating the growth of dinoflagellates and Cyanobacteria and influencing phytoplankton blooms, and represents a potential hazard to human health [3,4,5,6].
In aquatic environments, total ammonia exists in two chemical forms, unionized ammonia (NH3) and ionized ammonium (NH4+) [7], with different percentage depending on pH. In general, in water at 8.0 pH and 20 °C, only about 10% of the total ammonia is present as the more toxic form, ammonia (NH3). Since 90% is present as ammonium (NH4+), it is preferable to use the term ammonium to refer to this type of pollution in natural water ([3,8] and the references therein).
Nowadays, there is increasing attention and a significant number of studies that are focusing on nitrogen to gain more knowledge about the factors that are influencing its different transformation pathways. In freshwater ecosystems, under anoxic conditions, the anaerobic oxidation of ammonium can occur, which is called anammox reaction: NH4+ + NO2− → N2 [9,10]. On the other hand, in aerobic conditions, the biological oxidation of ammonium to nitrite and then nitrate (nitrification) is a two-step process involving different taxa of chemolithotrophic organisms: archaeal and bacterial ammonia oxidizers (AOA, AOB), which obtain their energy from the oxidation of ammonia to nitrite, and nitrite oxidizing bacteria (NOB), which strictly depend on ammonia oxidizers and complete the oxidation to nitrate [11,12]. This process is a key part of the complex nitrogen cycle and a fundamental process in aquatic environments, having a profound influence on ecosystem stability [13,14].
Total ammonia can enter water bodies from natural sources, such as the end product of animal protein catabolism, and/or anthropogenic sources, such as atmospheric deposition, sewage effluents, industrial wastes, agricultural run-off, and the decomposition of biological wastes ([15,16,17,18] and references therein). In the last decades, anthropogenic activity has increased the inputs of nitrogen affecting water quality and aquatic biodiversity, with also considerable socioeconomic consequences [19,20,21,22]. Thus, environmental factors influencing ammonium oxidation in freshwater systems have received considerable attention. Previous studies have highlighted that the nitrification rate in estuaries and in rivers depends on the activities of nitrifying bacteria and is affected by environmental parameters such as temperature, light, and pH values, as well as oxygen, nitrogen, organic carbon, and sulphide concentrations [13,23,24,25]. Despite recent advances, measurements of rates and controls of nitrification are relatively rare in lake ecosystems [26]. There is limited knowledge of the relationships among ammonium nitrification rate, lake trophic degree, and the associated microorganisms, which are closely related with the NH4+ removal efficiency and the self-purification capacity of lake ecosystems [27,28,29].
The transformation efficiency and velocity of ammonium into oxidized compounds in 14 lakes, located in the same geographic region, were compared with lab-scale experimentations performed in artificial aerobic microcosms. Our major goals were to determine nitrification rates in several lentic environments, which are characterized by different trophic levels (e.g., Total Phosphorus, Total Nitrogen) and natural content levels of ammonium in different seasons.
We conducted experiments to address the following questions that arose from previous studies: Are nitrification rates related to the lake trophic degree? How do lakes with different trophic degree react to an increased load of ammonium? Is the nitrification process influenced by seasonality? We hypothesized that the nitrification rate increased in productive lakes and in some seasons. A possible relationship between there parameters could lead to further questions regarding the different vulnerabilities in lakes of different trophic statuses.

For each lake, the water samples were collected in different months to highlight the possible variations in the ammonium transformation in relation to seasonality, totaling 74 samples. On water samples of Lakes Candia and Piano, the experiment was performed only once during the study, because, for logistic problems, we could not collect their water in different months. Each lake sample was collected by Niskin’s bottle near the littoral zone (3 m depth), in open water without vegetation, and quickly transferred to the laboratory. Before the experimental procedure, we measured the main chemical and physical parameters, characterizing lacustrine water quality. Temperature and pH were detected in situ with a portable underwater multiparameter probe (WTW multi3432). Total phosphorus, soluble reactive phosphorus, total nitrogen, ammonium nitrogen, and alkalinity were analyzed using standard methods [36,37]. Nitrate nitrogen anions were measured using the Ion Chromatography (Thermo Scientific™ Dionex™, Waltham, MA, USA).
For each lake, the water samples were placed into clean 4 L polycarbonate microcosms (tanks) and amended with one mg/L of ammonium, as NH4Cl (10 μM). The microcosms were kept in the dark at 20 °C and continually shaken. The oxygen saturation was maintained between 80% and 100%. For all the sampled lakes, excluding L. Candia and L. Piano (not watertight seal of microcosms), experiment replicates have been performed in order to verify the text repeatability.
The ammonium consumption was monitored at high frequency, by colorimetric spectrophotometry, until its complete depletion.

To analyze and discuss the experimental results, three parameters have been evaluated: (a) D25 and (b) D95, as time elapsed to observe an ammonium decrease of 25% and 95% of the initial concentration in amended microcosm; (c) OxRate, amount of ammonium oxidised in each day (µg NH4+/L day) to reduce the ammonium concentration from 25% to 95% of initial concentration in amended microcosms. To avoid redundancy among dependent variables, the relations between these parameters have been tested by Spearman’s rank correlation coefficient.
For statistical analyses, two parameters were selected as response variables, D25 and OxRate, and to avoid collinearity among predictor, two principal component analyses (PCA) were performed in order to reduce dimensions and select a smaller set of variables [38]. The chemico-physical included parameters, measured before the experiment on lake water samples, were: total phosphorus (TP), soluble reactive phosphorus (SRP), total nitrogen (TP), nitrate nitrogen (NO3−), ammonium nitrogen (NH4+), temperature (TEMP), alkalinity (ALK), and pH. All data were centered (mean value = 0) and scaled (variance = 1) to allow comparison among parameters [39]. Only six predictors were selected from the initial set of 8 to perform the following analyses. We used general linear models (GLMs), a statistical procedure similar to an analysis of variance used to estimate effect size of different factors on a variable of interest [40,41], to analyze the effect of trophic degrees and seasonality on the transformation velocity of ammonia into oxidised compounds. One model had as response variable D25 and the other one had OxRate. We first built a full model including all independent variables that may affect the dependent variable under scrutiny: TP, TN, ALK, TEMP, pH, NH4+, and the possible interactions. Finally, we removed all of the non-significant predictors in two-steps to obtain a final model [42]. The assumptions for general linear models were checked by inspection of diagnostic plots and applying Shapiro–Wilks tests [43]. Interactions were excluded before the relevant main effects. Statistical analyses and figures were produced using different packages (base packages and “ggplot2”, “corrplot”, “factoextra”) in R 3.4.1. [44,45,46,47].

This work was supported by the University of Milano-Bicocca (FA). We are grateful to Letizia Garibaldi, Alba Varallo and Angela Ferrauto. We thank the anonymous reviewers for their comments, which helped to improve this article. 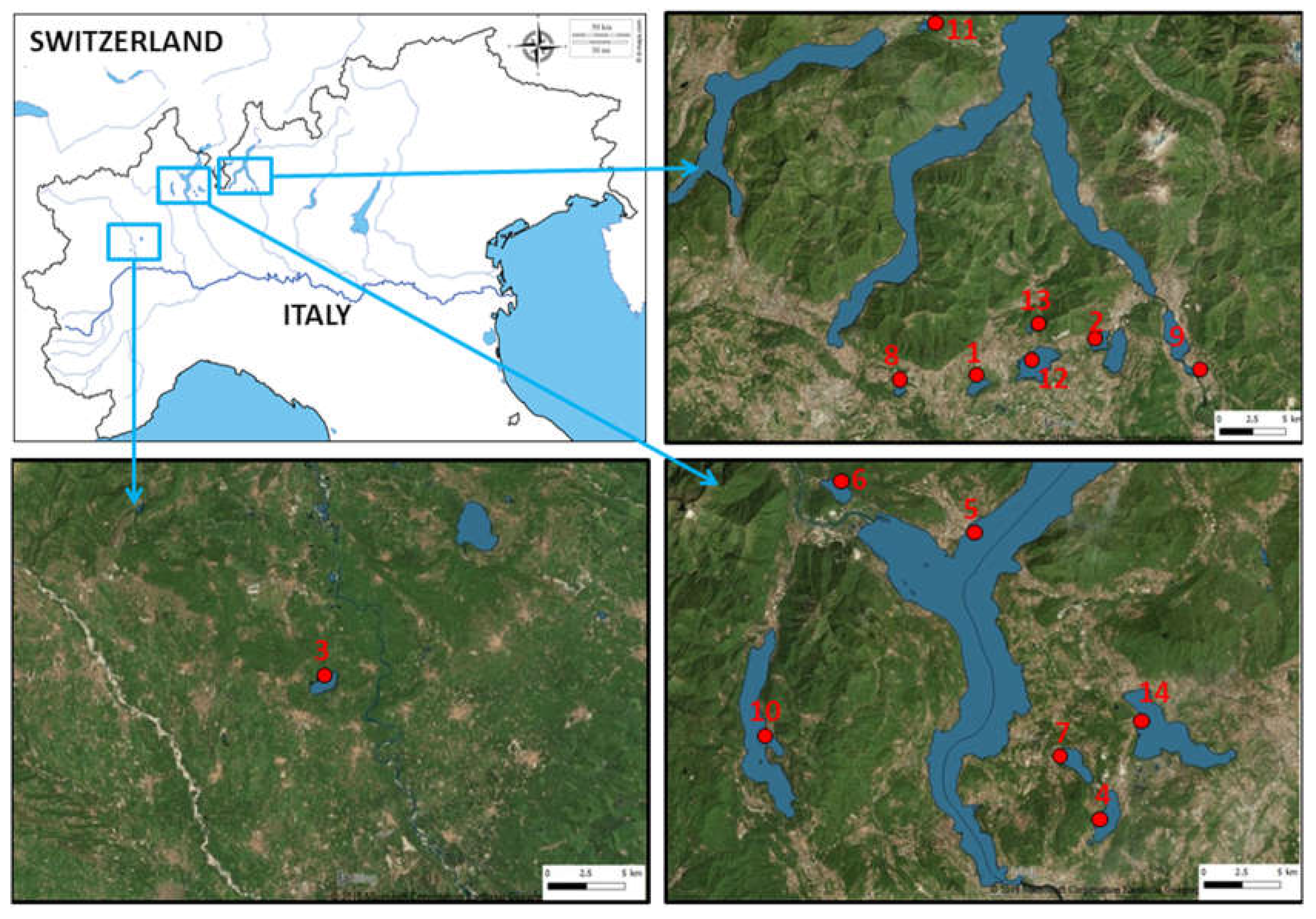