Black-billed gulls (Larus bulleri) are endemic to New Zealand and are suspected to be undergoing substantial population declines. They primarily breed on open gravel beds in braided rivers of the South Island—a habitat that is diminishing and becoming increasingly modified. Although management of this species is increasing, little has been published on their movements and demographics. In this study, both mitochondrial DNA (mtDNA) control region domain I and nuclear single nucleotide polymorphisms (SNPs) were examined to help understand the connectivity and population structure of black-billed gulls across the country and to help inform management decisions. Mitochondrial DNA showed no population structure, with high haplotype and low nucleotide diversity, and analyses highlighted mitochondrial introgression with the closely related red-billed gulls (Larus novaehollandiae scopulinus). Nuclear DNA analyses, however, identified two groups, with Rotorua birds in the North Island being distinct from the rest of New Zealand, and isolation-by-distance evident across the South Island populations. Gene flow primarily occurs between nearby colonies with a stepwise movement across the landscape. The importance from a genetic perspective of the more isolated North Island birds (1.6% of total population) needs to be further evaluated. From our results, we infer that the South Island black-billed gull management should focus on maintaining several populations within each region rather than focusing on single specific colonies or river catchments. Future study is needed to investigate the genetic structure of populations at the northern limit of the species’ range, and identify the mechanisms behind, and extent of, the hybridisation between red-billed and black-billed gulls. View Full-Text
Keywords: genetic diversity; population structure; endemic; mitochondrial introgression; isolation-by-distance genetic diversity; population structure; endemic; mitochondrial introgression; isolation-by-distance
►▼ Show Figures 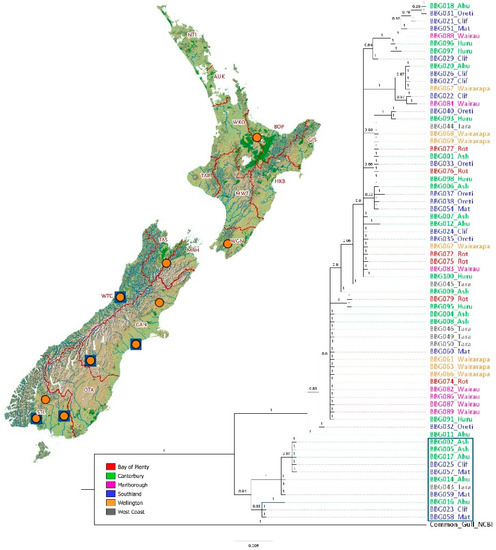