Periwinkles of the family Littorinidae (Children, 1834) are common members of seashore littoral communities worldwide. Although the family is composed of more than 200 species belonging to 18 genera, chromosome numbers have been described in only eleven of them. A molecular cytogenetic analysis of nine periwinkle species, the rough periwinkles Littorina arcana, L. saxatilis, and L. compressa, the flat periwinkles L. obtusata and L. fabalis, the common periwinkle L. littorea, the mangrove periwinkle Littoraria angulifera, the beaded periwinkle Cenchritis muricatus, and the small periwinkle Melarhaphe neritoides was performed. All species showed diploid chromosome numbers of 2n = 34, and karyotypes were mostly composed of metacentric and submetacentric chromosome pairs. None of the periwinkle species showed chromosomal differences between male and female specimens. The chromosomal mapping of major and minor rDNA and H3 histone gene clusters by fluorescent in situ hybridization demonstrated that the patterns of distribution of these DNA sequences were conserved among closely related species and differed among less related ones. All signals occupied separated loci on different chromosome pairs without any evidence of co-localization in any of the species. View Full-Text
Keywords: periwinkles; chromosome; fluorescent in situ hybridization; histone genes; ribosomal RNA genes periwinkles; chromosome; fluorescent in situ hybridization; histone genes; ribosomal RNA genes
►▼ Show Figures 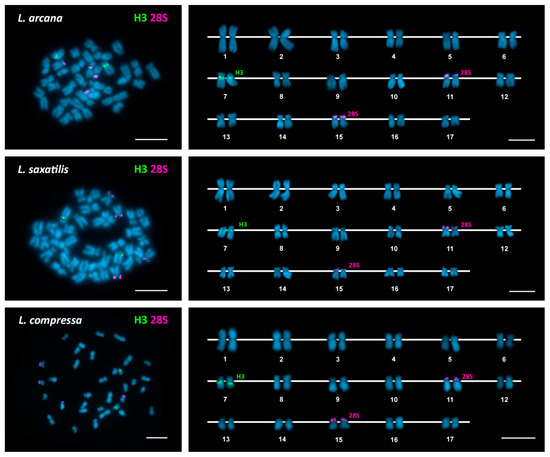