New Insights into Phasmatodea Chromosomes
Next Article in Special Issue

Several studies have established that pseudogene mRNAs can work as competing endogenous RNAs and, when deregulated, play a key role in the onset of human neoplasias. Recently, we have isolated two HMGA1 pseudogenes, HMGA1P6 and HMGA1P7. These pseudogenes have a critical role in cancer progression, acting as micro RNA (miRNA) sponges for HMGA1 and other cancer-related genes. HMGA1 pseudogenes were found overexpressed in several human carcinomas, and their expression levels positively correlate with an advanced cancer stage and a poor prognosis. In order to investigate the molecular alterations following HMGA1 pseudogene 7 overexpression, we carried out miRNA sequencing analysis on HMGA1P7 overexpressing mouse embryonic fibroblasts. Intriguingly, the most upregulated miRNAs were miR-483 and miR-675 that have been described as key regulators in cancer progression. Here, we report that HMGA1P7 upregulates miR-483 and miR-675 through a competing endogenous RNA mechanism with Egr1, a transcriptional factor that positively regulates miR-483 and miR-675 expression. View Full-Text
Keywords: HMGA1 pseudogenes; HMGA1P7; micro RNA; ceRNA HMGA1 pseudogenes; HMGA1P7; micro RNA; ceRNA
►▼ Show Figures 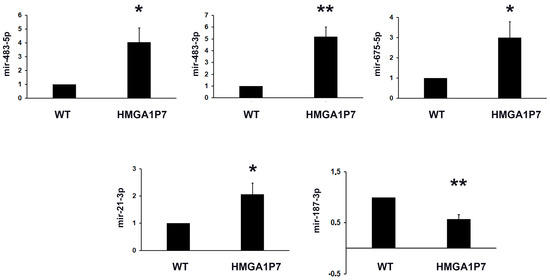