Neurofibromatosis 1 (NF1) is one of the most common genetic disorders and is caused by mutations in the NF1 gene. NF1 gene mutational analysis presents a considerable challenge because of its large size, existence of highly homologous pseudogenes located throughout the human genome, absence of mutational hotspots, and diversity of mutations types, including deep intronic splicing mutations. We aimed to evaluate the use of hybridization capture-based next-generation sequencing to screen coding and noncoding NF1 regions. Hybridization capture-based next-generation sequencing, with genomic DNA as starting material, was used to sequence the whole NF1 gene (exons and introns) from 11 unrelated individuals and 1 relative, who all had NF1. All of them met the NF1 clinical diagnostic criteria. We showed a mutation detection rate of 91% (10 out of 11). We identified eight recurrent and two novel mutations, which were all confirmed by Sanger methodology. In the Sanger sequencing confirmation, we also included another three relatives with NF1. Splicing alterations accounted for 50% of the mutations. One of them was caused by a deep intronic mutation (c.1260 + 1604A > G). Frameshift truncation and missense mutations corresponded to 30% and 20% of the pathogenic variants, respectively. In conclusion, we show the use of a simple and fast approach to screen, at once, the entire NF1 gene (exons and introns) for different types of pathogenic variations, including the deep intronic splicing mutations. View Full-Text
Keywords: Neurofibromatosis 1; NF1 gene; next generation sequencing Neurofibromatosis 1; NF1 gene; next generation sequencing
►▼ Show Figures 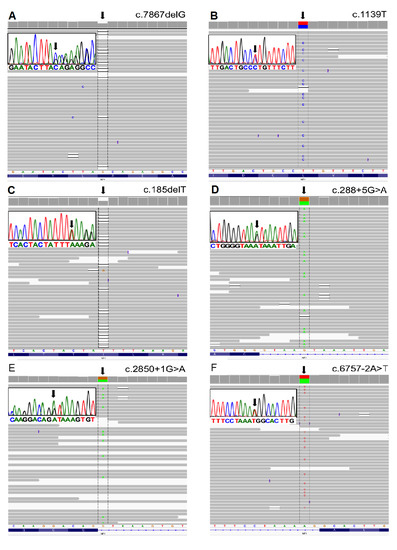