Epigenetic Control of the Genome—Lessons from Genomic Imprinting

Whole-exome sequencing (WES) is a new tool that allows the rapid, inexpensive and accurate exploration of Mendelian and complex diseases, such as obesity. To identify sequence variants associated with obesity, we performed WES of family trios of one male teenager and one female child with severe early-onset obesity. Additionally, the teenager patient had hypopituitarism and hyperprolactinaemia. A comprehensive bioinformatics analysis found de novo and compound heterozygote sequence variants with a damaging effect on genes previously associated with obesity in mice (LRP2) and humans (UCP2), among other intriguing mutations affecting ciliary function (DNAAF1). A gene ontology and pathway analysis of genes harbouring mutations resulted in the significant identification of overrepresented pathways related to ATP/ITP (adenosine/inosine triphosphate) metabolism and, in general, to the regulation of lipid metabolism. We discuss the clinical and physiological consequences of these mutations and the importance of these findings for either the clinical assessment or eventual treatment of morbid obesity. View Full-Text
Keywords: DNAAF1; genetics; leptin-melanocortin; LRP2; megalin; monogenic; obesity; pituitary; UCP2; whole-exome sequencing DNAAF1; genetics; leptin-melanocortin; LRP2; megalin; monogenic; obesity; pituitary; UCP2; whole-exome sequencing
►▼ Show Figures 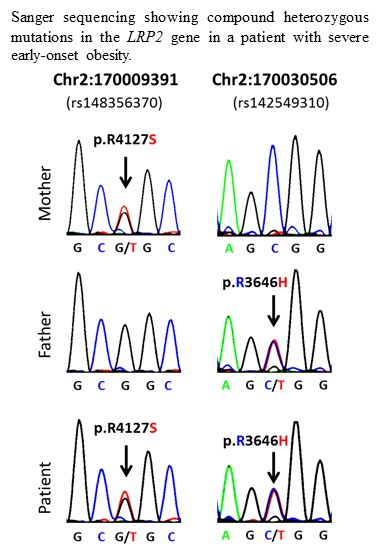