The autosomal Sry-related gene, Sox9, encodes a transcription factor, which performs an important role in testis differentiation in mammals. In several reptiles, Sox9 is differentially expressed in gonads, showing a significant upregulation during the thermo-sensitive period (TSP) at the male-promoting temperature, consistent with the idea that SOX9 plays a central role in the male pathway. However, in spite of numerous studies, it remains unclear how SOX9 functions during this event. In the present work, we developed an RNAi-based method for silencing Sox9 in an in vitro gonad culture system for the sea turtle, Lepidochelys olivacea. Gonads were dissected as soon as the embryos entered the TSP and were maintained in organ culture. Transfection of siRNA resulted in the decrease of both Sox9 mRNA and protein. Furthermore, we found coordinated expression patterns for Sox9 and the anti-Müllerian hormone gene, Amh, suggesting that SOX9 could directly or indirectly regulate Amh expression, as it occurs in mammals. These results demonstrate an in vitro method to knockdown endogenous genes in gonads from a sea turtle, which represents a novel approach to investigate the roles of important genes involved in sex determination or differentiation pathways in species with temperature-dependent sex determination. View Full-Text
Keywords: Sox9; Amh; RNAi; Lepidochelys olivacea; gonad culture Sox9; Amh; RNAi; Lepidochelys olivacea; gonad culture
►▼ Show Figures 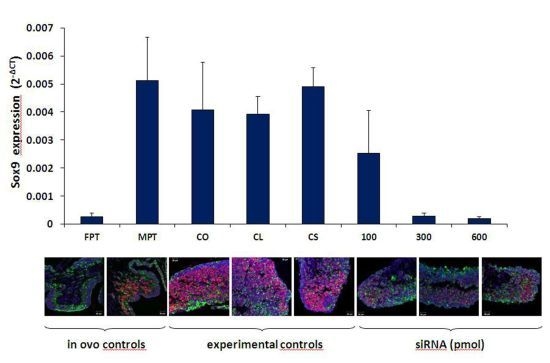