Atypical femoral fractures (AFF) are rare fragility fractures in the subtrocantheric or diaphysis femoral region associated with long-term bisphosphonate (BP) treatment. The etiology of AFF is still unclear even though a genetic basis is suggested. We performed whole exome sequencing (WES) analysis of 12 patients receiving BPs for at least 5 years who sustained AFFs and 4 controls, also long-term treated with BPs but without any fracture. After filtration and prioritization of rare variants predicted to be damaging and present in genes shared among at least two patients, a total of 272 variants in 132 genes were identified. Twelve of these genes were known to be involved in bone metabolism and/or AFF, highlighting DAAM2 and LRP5, both involved in the Wnt pathway, as the most representative. Afterwards, we intersected all mutated genes with a list of 34 genes obtained from a previous study of three sisters with BP-related AFF, identifying nine genes. One of these (MEX3D) harbored damaging variants in two AFF patients from the present study and one shared among the three sisters. Gene interaction analysis using the AFFNET web suggested a complex network among bone-related genes as well as with other mutated genes. BinGO biological function analysis highlighted cytoskeleton and cilium organization. In conclusion, several genes and their interactions could provide genetic susceptibility to AFF, that along with BPs treatment and in some cases with glucocorticoids may trigger this so feared complication. View Full-Text
Keywords: atypical femoral fractures; bisphosphonates; WES atypical femoral fractures; bisphosphonates; WES
►▼ Show Figures 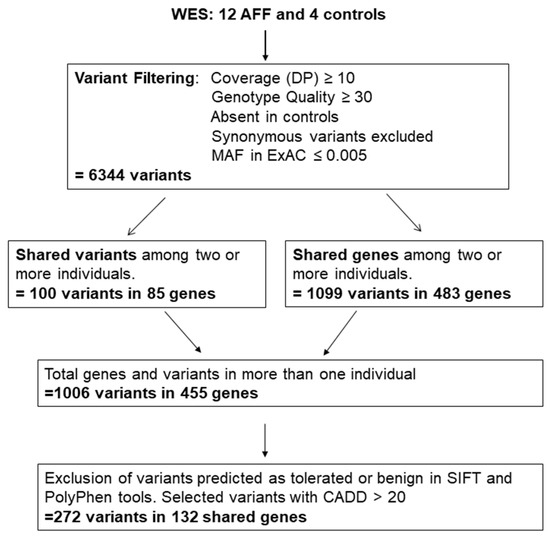