Corynebacterium pseudotuberculosis is a Gram-positive bacterium that causes caseous lymphadenitis, a disease that predominantly affects sheep, goat, cattle, buffalo, and horses, but has also been recognized in other animals. This bacterium generates a severe economic impact on countries producing meat. Gene expression studies using RNA-Seq are one of the most commonly used techniques to perform transcriptional experiments. Computational analysis of such data through reverse-engineering algorithms leads to a better understanding of the genome-wide complexity of gene interactomes, enabling the identification of genes having the most significant functions inferred by the activated stress response pathways. In this study, we identified the influential or causal genes from four RNA-Seq datasets from different stress conditions (high iron, low iron, acid, osmosis, and PH) in C. pseudotuberculosis, using a consensus-based network inference algorithm called miRsigand next identified the causal genes in the network using the miRinfluence tool, which is based on the influence diffusion model. We found that over 50% of the genes identified as influential had some essential cellular functions in the genomes. In the strains analyzed, most of the causal genes had crucial roles or participated in processes associated with the response to extracellular stresses, pathogenicity, membrane components, and essential genes. This research brings new insight into the understanding of virulence and infection by C. pseudotuberculosis. View Full-Text
Keywords: Corynebacterium pseudotuberculosis; RNA-Seq; co-expression networks; influence genes; stress condition Corynebacterium pseudotuberculosis; RNA-Seq; co-expression networks; influence genes; stress condition
►▼ Show Figures 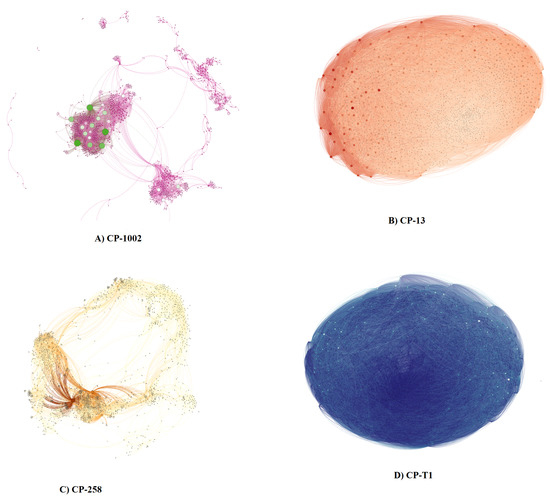