Genome-Wide Diversity, Population Structure and Demographic History of Dromedaries in the Central Desert of Iran
Previous Article in Journal

Cytogenetic Mapping of 35 New Markers in the Alpaca (Vicugna pacos)

Llamas (Lama glama) are invaluable resources of Peru. Despite their importance, their population is decreasing. The Camelid Germplasm Bank—Quimsachata was created as a guardian of this South American camelid (SAC) species and established a bank of llamas from their two types, Ch’aku and Q’ara. However, these populations need to present high genetic diversity to be considered suitable conservation stocks. Thus, in the present study, 13 microsatellites specific for the SAC were used to assess the current genetic variability and differentiation of the llama population from the Bank. The global population showed high genetic diversity with a total of 157 different alleles, with an average of 12.08 alleles per microsatellite, an expected and observed heterozygosity of 0.758 and 0.707, respectively, and an average polymorphic information content (PIC) of 0.723. Although considered as two different breeds and managed separately, the genetic differentiation between Ch’aku and Q’ara was low (FST = 0.01). Accordingly, the gene flow value was high (Nm = 30.5). Overall, our results indicate the existence of high genetic variation among individuals, and thus, this llama population could be considered a suitable genetic stock for their conservation and for sustainability programs. Additionally, the 13 microsatellites can be used to study other Peruvian llama populations and monitor the genetic variability of llamas from the Camelid Germplasm Bank—Quimsachata. View Full-Text
Keywords: Lama glama; Camelid Germplasm Bank—Quimsachata; microsatellites; genetic diversity; population structure Lama glama; Camelid Germplasm Bank—Quimsachata; microsatellites; genetic diversity; population structure
►▼ Show Figures 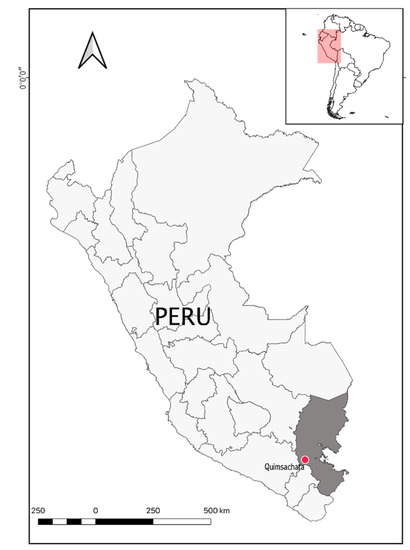