Regulation of KIR3DL3 Expression via miRNA
Previous Article in Journal

The genus Pseudomonas comprises many known plant-associated microbes with plant growth promotion and disease suppression properties. Genome-based studies allow the prediction of the underlying mechanisms using genome mining tools and the analysis of the genes unique for a strain by implementing comparative genomics. Here, we provide the genome sequence of the strain Pseudomonas brassicacearum 3Re2-7, formerly known as P. trivialis and P. reactans, elucidate its revised taxonomic classification, experimentally verify the gene predictions by transcriptome sequencing, describe its genetic biocontrol potential and contextualize it to other known Pseudomonas biocontrol agents. The P. brassicacearum 3Re2-7 genome comprises a circular chromosome with a size of 6,738,544 bp and a GC-content of 60.83%. 6267 genes were annotated, of which 6113 were shown to be transcribed in rich medium and/or in the presence of Rhizoctonia solani. Genome mining identified genes related to biocontrol traits such as secondary metabolite and siderophore biosynthesis, plant growth promotion, inorganic phosphate solubilization, biosynthesis of lipo- and exopolysaccharides, exoproteases, volatiles and detoxification. Core genome analysis revealed, that the 3Re2-7 genome exhibits a high collinearity with the representative genome for the species, P. brassicacearum subsp. brassicacearum NFM421. Comparative genomics allowed the identification of 105 specific genes and revealed gene clusters that might encode specialized biocontrol mechanisms of strain 3Re2-7. Moreover, we captured the transcriptome of P. brassicacearum 3Re2-7, confirming the transcription of the predicted biocontrol-related genes. The gene clusters coding for 2,4-diacetylphloroglucinol (phlABCDEFGH) and hydrogen cyanide (hcnABC) were shown to be highly transcribed. Further genes predicted to encode putative alginate production enzymes, a pyrroloquinoline quinone precursor peptide PqqA and a matrixin family metalloprotease were also found to be highly transcribed. With this study, we provide a basis to further characterize the mechanisms for biocontrol in Pseudomonas species, towards a sustainable and safe application of P. brassicacearum biocontrol agents. View Full-Text
Keywords: Pseudomonas brassicacearum; genome mining; RNA sequencing; comparative genomics; biocontrol; plant-growth promotion; transcriptomics Pseudomonas brassicacearum; genome mining; RNA sequencing; comparative genomics; biocontrol; plant-growth promotion; transcriptomics
►▼ Show Figures 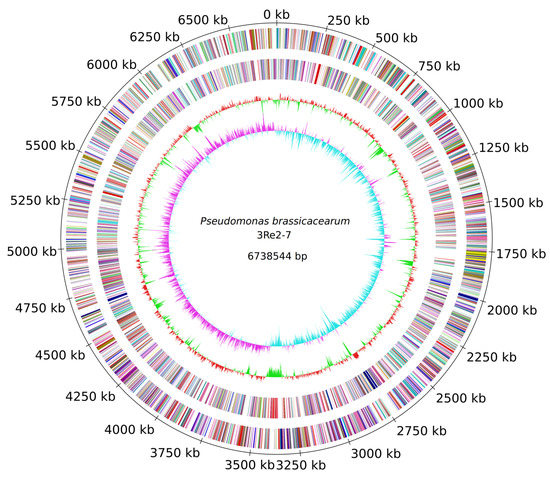