Cellulosic Bionanocomposites: A Review of Preparation, Properties and Applications

Polyaniline can form complexes with many metal ions by reacting with the base metal, provided its oxidation potential is lower than polyaniline’s potential [18,19]. Hence, complexes have been observed forming with Cu1+, Fe2+, Zn2+, In2+ and others.
When looking too quickly at the reaction of polyaniline with the metal form of Cu, Fe, Zn, or In, respectively, it could easily be concluded that a simple oxidation has taken place, and many experimentalists may have concluded this. However, the result is completely different when simply adding Cu1+, Fe2+, Zn2+ or In2+ ion salts to a water dispersion of polyaniline, compared to the result when allowing a water dispersion of polyaniline to react with Cu, Fe, Zn, or In metal (in granule or powder form), and hence the result of such reaction is much more interesting.
This can easily be seen when comparing the spectra: When mixing the respective metal ions (water solution) with the polyaniline water dispersion, the UV spectra will not change at all, except for some minor dilution effect. However, when following the reaction of polyaniline with the metal (which is a relatively slow reaction taking several hours to complete), the UV spectra gradually change and will ultimately be very different from the starting polyaniline spectrum, as can be seen in Figure 1, Figure 2, Figure 3 and Figure 4. 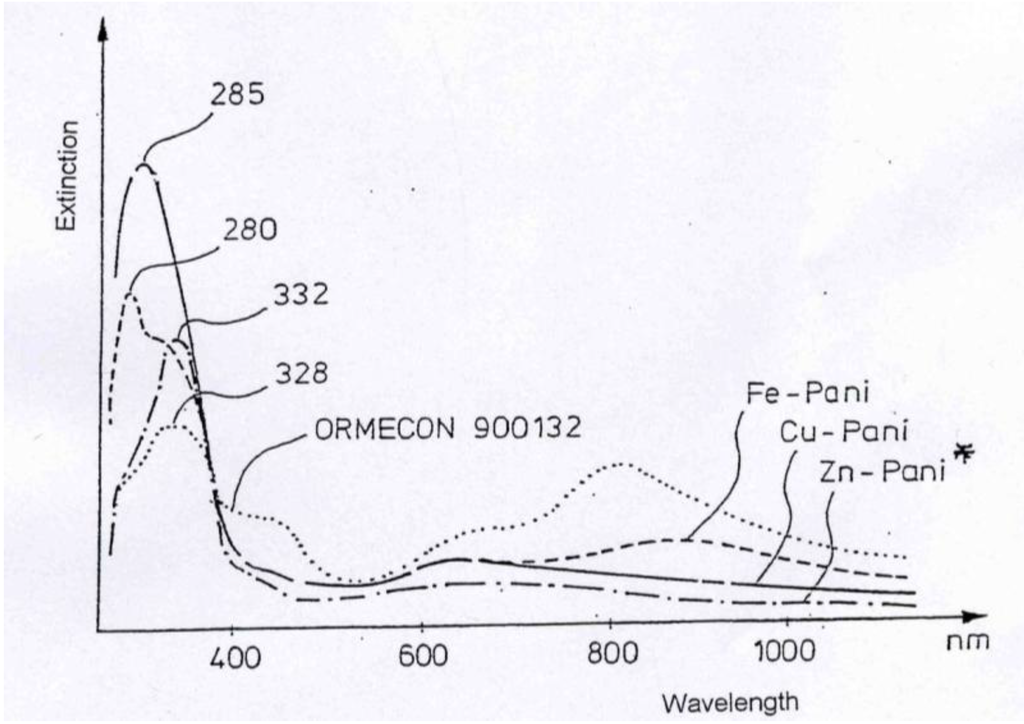 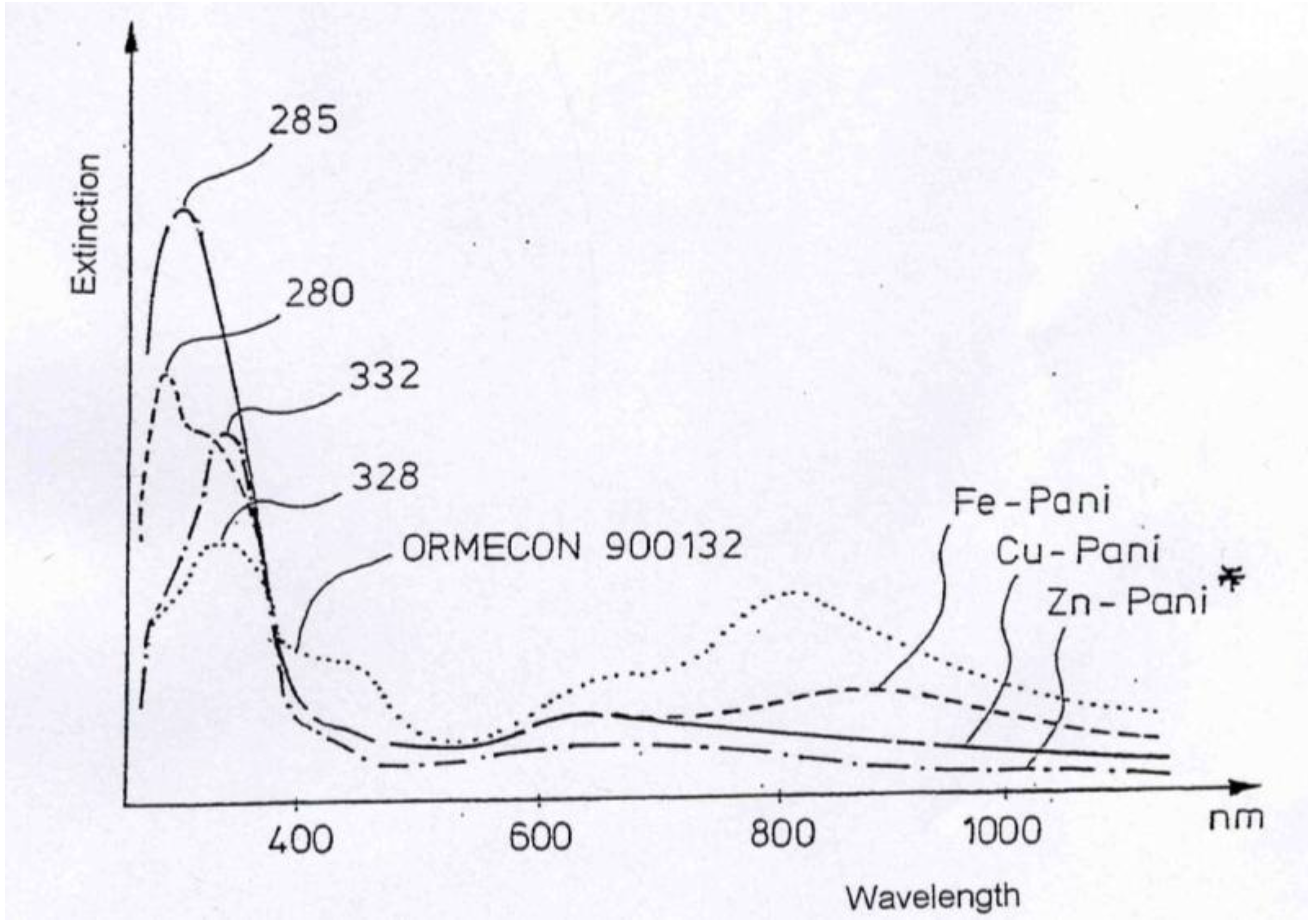 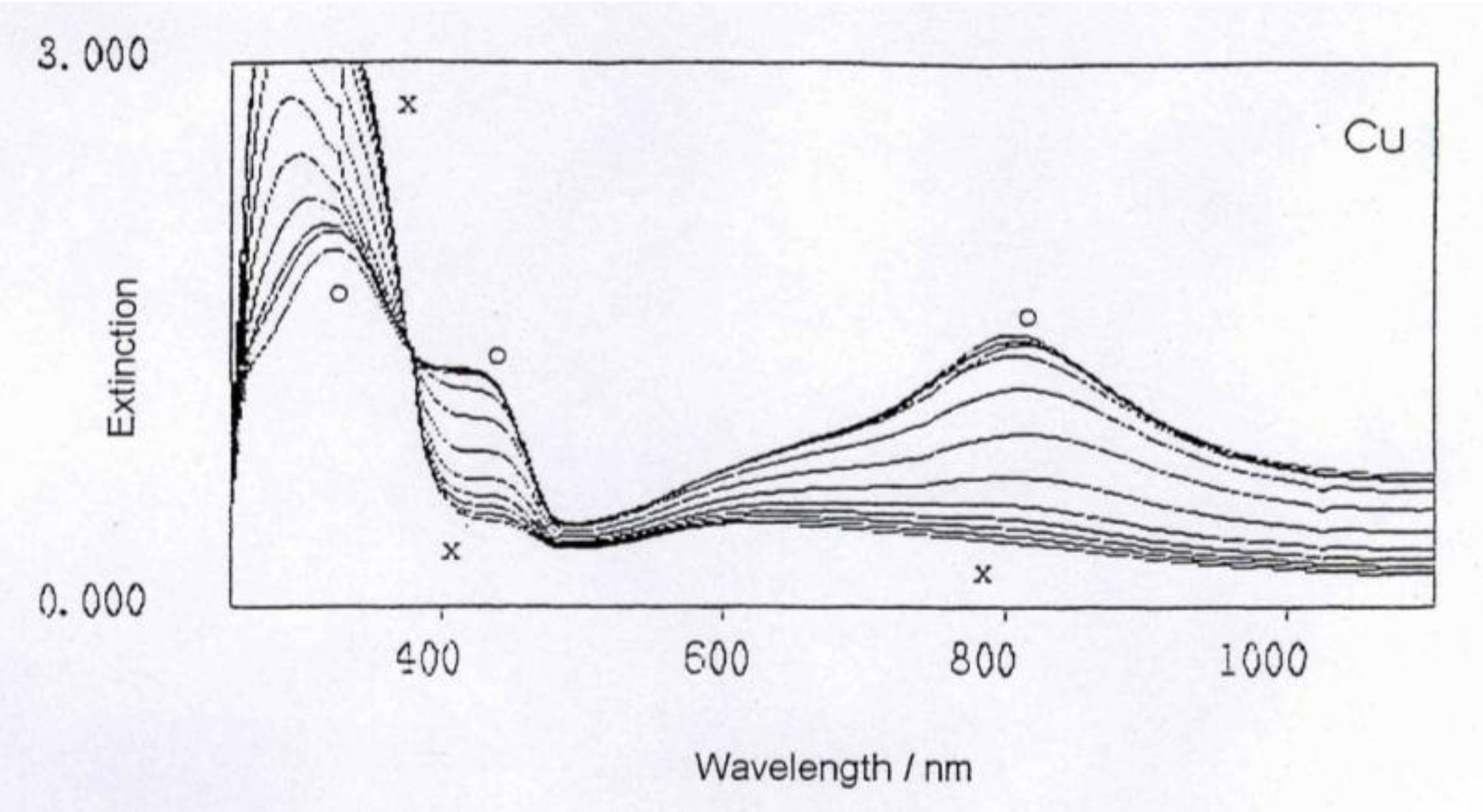 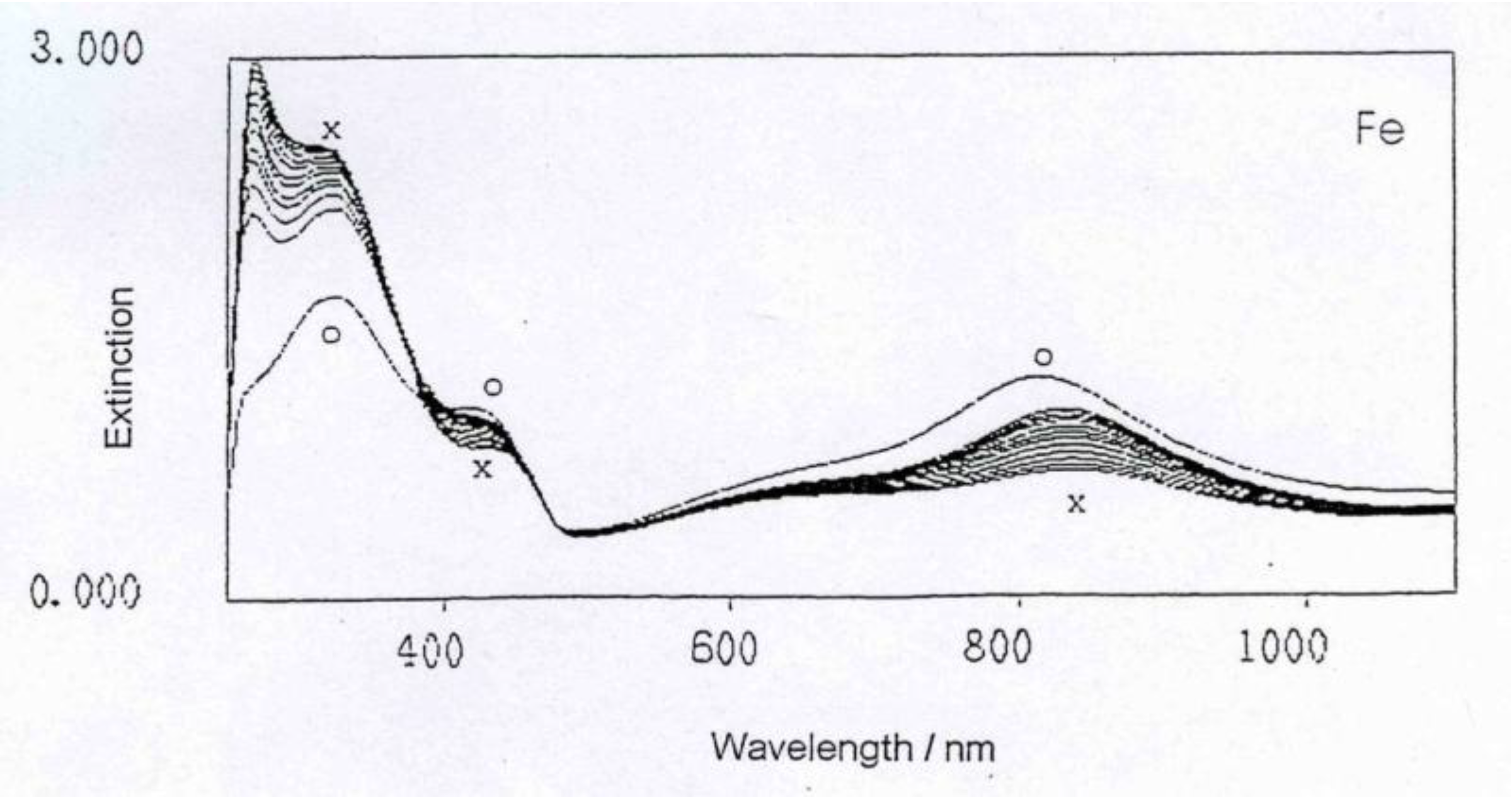 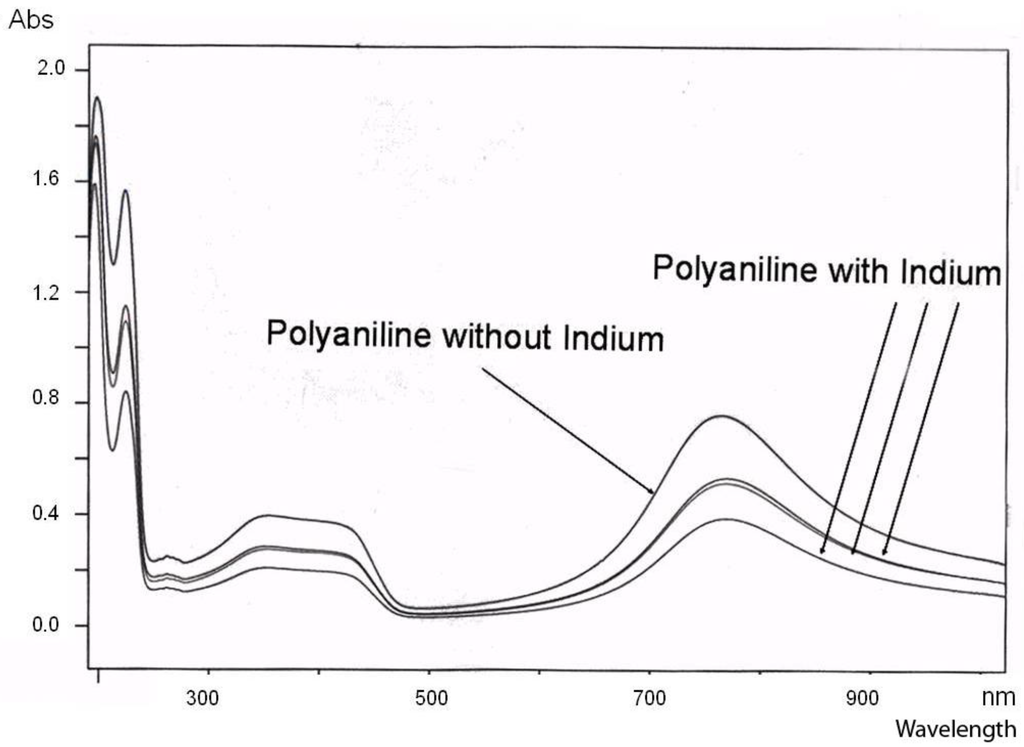 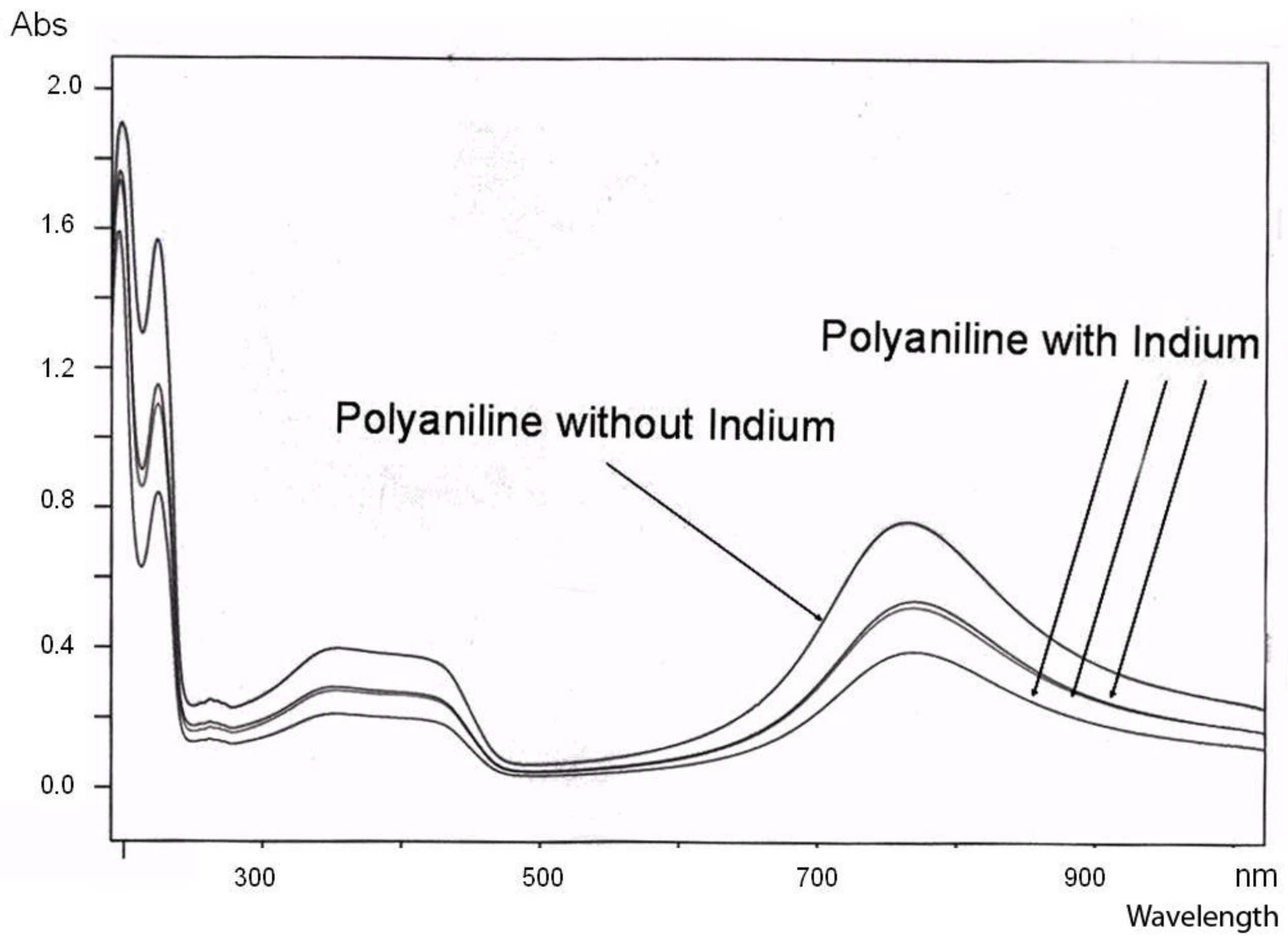 The general feature of all spectra is that the absorption strength around 800 nm decreases with proceeding complex formation, also the absorption strength around 450 nm decreases, with an isosbestic point appearing around 390 nm, and the absorption in the UV region increases. These effects are the most impressive in the formation of the polyaniline-Cu complex. This is not so surprising as the amount of Cu1+ in this complex is 1 per about 12 aniline units, while in the case of the other ions (Fe2+, Zn2+, In2+) the relation is roughly 1:24, as was found by elemental analysis.
These spectra clearly show that new compositions have been formed, true polyaniline/metal ion complexes.
The conclusion that we have drawn (in the case of Cu) with Cu1+ comes from two different experiments: In printed circuit board finishing with the immersion tin process ORMECON CSN, where a water dispersion of polyaniline is used as a Cu surface preparation pretreatment called “predip” (trade name OMP 7000), the Cu complex plays a key role. Here, in contrast to other immersion tin processes not using such an organic metal predip, the relation between Cu release and Sn deposition is almost exactly 2:1 [21] which corresponds to a net reaction equation such as:
2Cu + Sn2+ ➔ Sn + 2Cu1+
For competitive tin deposition processes, a relation of roughly 1.5 to 1.0:1 has been observed which indicates a mixture of Cu2+ and Cu1+ or, in extreme cases only, Cu2+ to be released.
In addition, x-ray photoelectron spectroscopy (XPS) spectra of the Cu after treatment with the organic metal (in comparison to untreated Cu) clearly show the Cu1+ oxidation stage [1] (p. 535).
The conclusion that in the case of iron the Fe(II) oxidation state is involved, has been drawn based on earlier work in connection with studies of the reaction mechanism leading to the passivation of iron and steel and its subsequent enhanced corrosion protection which was found to proceed via the Fe2+ ion [22].
For the polyaniline/indium complex, we additionally performed cyclovoltammetric studies [23]. While the pure polyaniline shows two oxidation and, correspondingly, two reduction peaks, the polyaniline-In complex only shows one single oxidation peak (at a significantly higher voltage) and one corresponding reduction peak (Figure 5).

To conclude, it can be stated that polyaniline forms metal ion complexes via a reaction with the base metal, however with a low coordination number (1:12 in the case of Cu1+, 1:24 in the case of Me2+). The exact structure of these complexes is not known. Three of these complexes are already commercially used: The Cu complex in printed circuit board finishing; the Fe complex in corrosion protection; and the In complex in hole injection layers for organic light emitting diodes (OLEDs).

For additional insight, we performed x-ray diffraction studies, but this time down to the range of 2θ = 2°. For this study, we used polyaniline taken from different stages of the multi-step dispersion process. Figure 6 shows spectra of the raw (dry) polyaniline powder taken directly after polymerization and samples from different stages of the first dispersion step (in total, for commercial products, three subsequent dispersion steps are used [24]). The starting conductivity (raw powder) is 5 S/cm, the maximum conductivity after the first dispersion step is 30 S/cm. Figure 7 shows spectra of two samples taken from films which have been deposited after the third dispersion step.
As can be seen in Figure 6 and Figure 7, the originally dominant peak around 2θ = 25° is weakening (= lower degree of crystallinity) and shifted to higher angle values (= denser packing, as previously observed and commented on in the introduction section), while the peak around 2θ = 20° slightly increases in intensity and shifts to lower angle values.
With increasing conductivity, especially detectable in Figure 7, a peak at around 2θ = 3.5° (originally very weak) emerges and becomes the most prominent one. This 2θ value represents a diffraction plane distance of around 2.2 nm, hence smaller than the 3.5 nm subunits found in the SAXS experiments. This means that within the 3.5 nm subunit, some order is emerging which is characterized by a diffraction plane pattern with 2.2 nm distance. 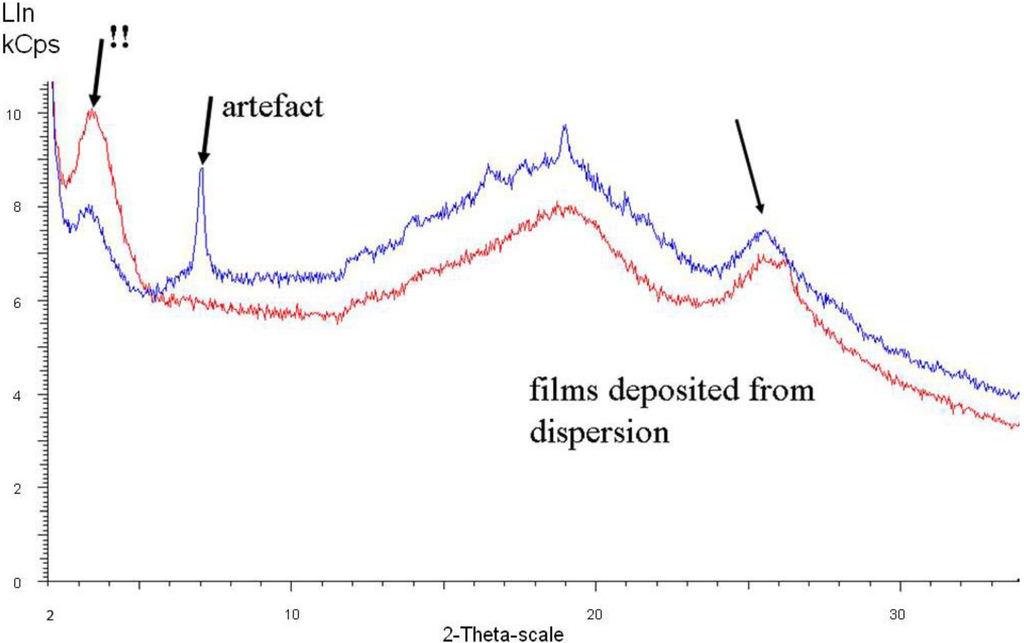 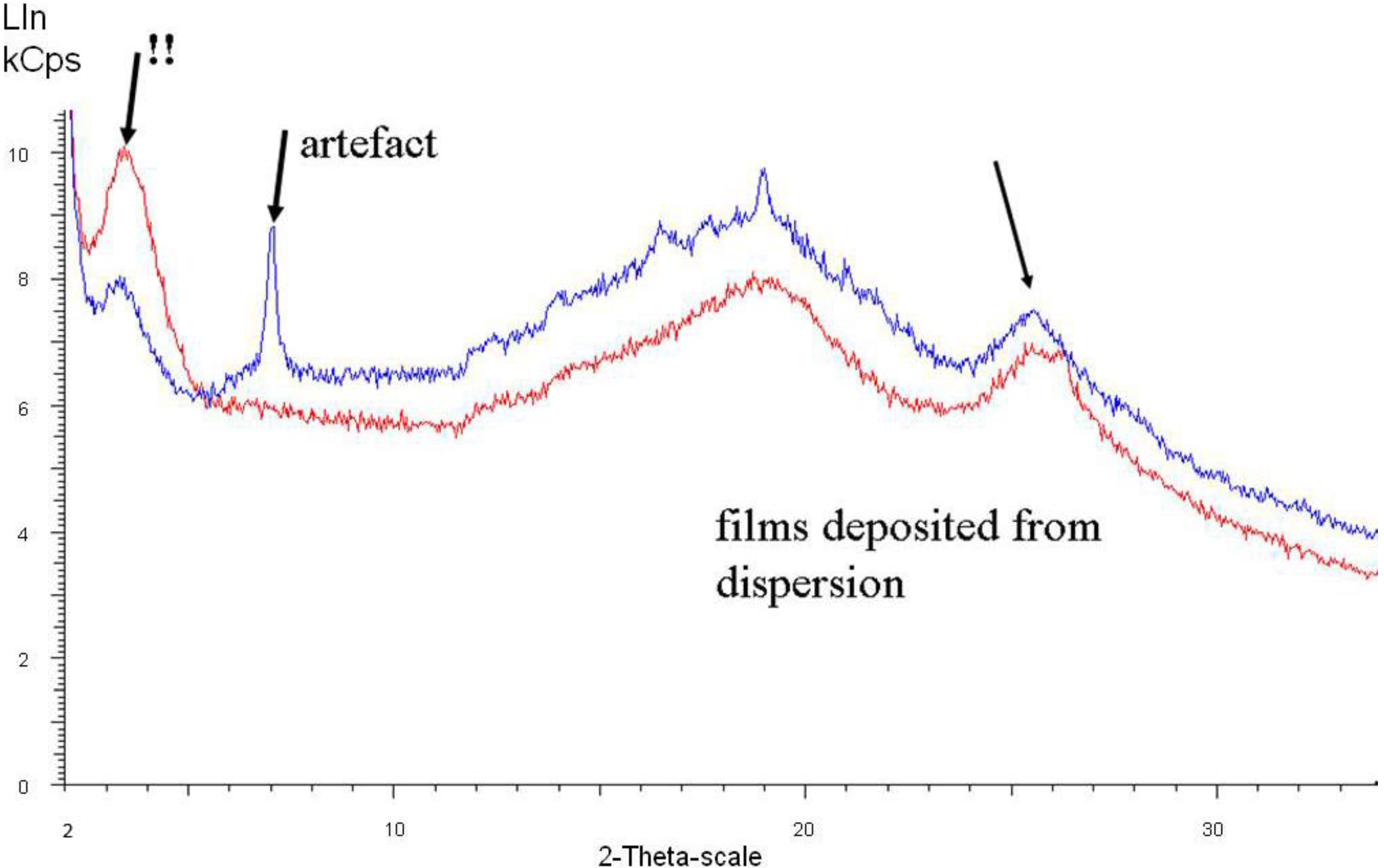 2.3. A New Structure Model for the Organic Metal Polyaniline

Before developing the new structure model, a few more facts needed to be considered. First, some older results should be mentioned concerning the estimated molecular weight. From MALDITOFF experiments, we know that polyaniline (at least the one we are synthesizing) exhibits a chain length of maximal 12 aniline units [17]. Second, some interesting results published by G. Wallace and coworkers a few years ago helped us make the next step towards a structure model [25]: Polyaniline can be synthesized in optically active form when using optically active dopants which is not so surprising; but what is very surprising is that it retains its optical activity after removal of the optically active dopants, although the neutral form, the so-called “Emeraldine Base”, no longer has asymmetric carbon atoms. However, it can be optically active if the (relatively short, see above comment about molecular weight) chain elements are not straight, but bent into a helical form.
It should also be noted that the strength of the optical activity is very high, which is indicated by the circular dichroism effect being one order of magnitude larger than that of the optically active dopants used. This means that the optical activity induced by the helical structure of the chains is very strong.
Table 1 shows a summary and an attempt to interpret the observed peaks and their changes with increasing conductivity.

Table 1. Summary of peaks and their changes in x-ray diffraction.
We need to add a final observation: While the primary particles of polyaniline (raw polymer powder) are more or less globular in shape (cf. STM pictures as shown in [26]), the form of the primary particles after all dispersion steps are completed and films exhibiting a conductivity of up to 600 S/cm can be deposited, are not globular at all any more, rather ellipsoidal in form, see Figure 8. 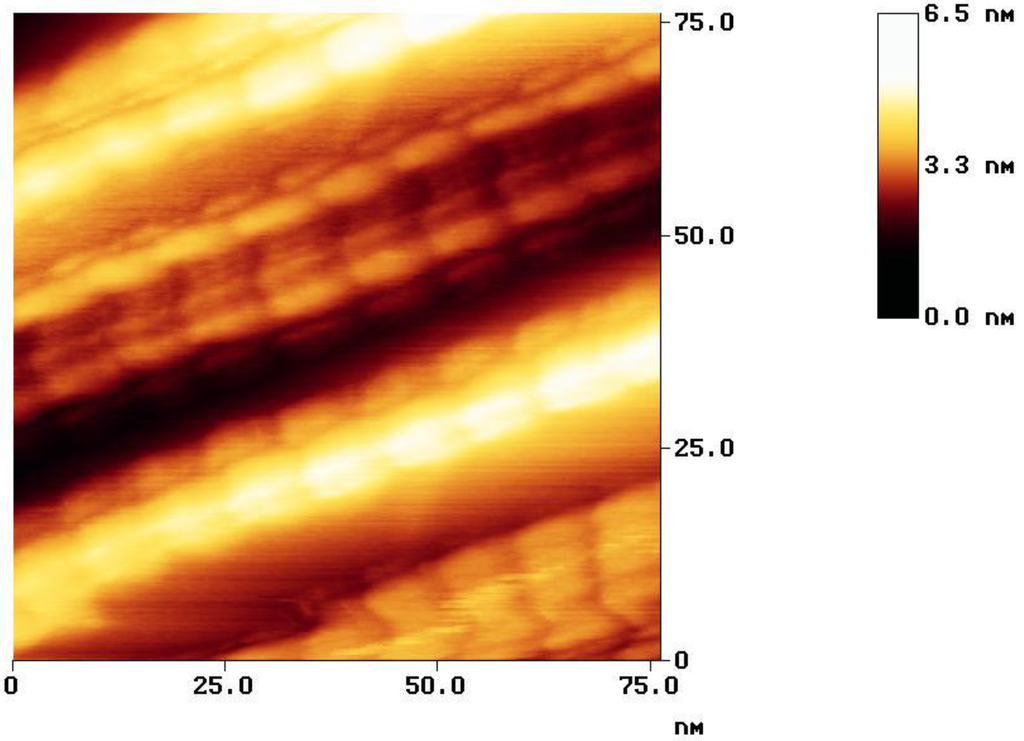 We are now ready to draft the new structure model and a model for understanding: (a) why dispersion is capable of increasing the conductivity and transforming the insulator type of conductor to a metallic type; (b) what structure features are responsible for higher conductivity.
The new model consists of the following elements:

-
primary particle size of around 10 nm (globular form) before dispersion
-
after completed dispersion, the form is ellipsoidal with a dimension of 13 (long diameter) and 6 nm (short diameter)
-
the primary particle contains a certain number of polyaniline molecules which attain an average diameter of roughly 3.5 nm
-
the chain thickness (including dopants) is about 1.2 nm
-
the chain is coiled forming a (short) helix
-
before dispersion takes place, the short helical polyaniline chains are almost randomly oriented within the mainly globular primary particle
-
upon the strong force induced by the dispersion steps, the particles not only become denser, but also the helical chains are orienting (at least partially) allowing correlation between the helix turn distance (2.2 nm) of each of the now oriented helices (see Figure 9 and Figure 10)
-
the arrangement of the short helices after dispersion is (in optimal or ideal case) such that effectively a longer helix is formed (see Figure 10)
-
it is tempting to hypothesize that in the case of the Cu complex, one helix can complex one Cu ion, and in case of the Fe (and other Me2+ complexes) two helices would complex one ion
-
we do not know where the dopants are located—inside the helix, “on top”, or “at the bottom” of the helical chain? (“top” and “bottom” referring to the helix direction) 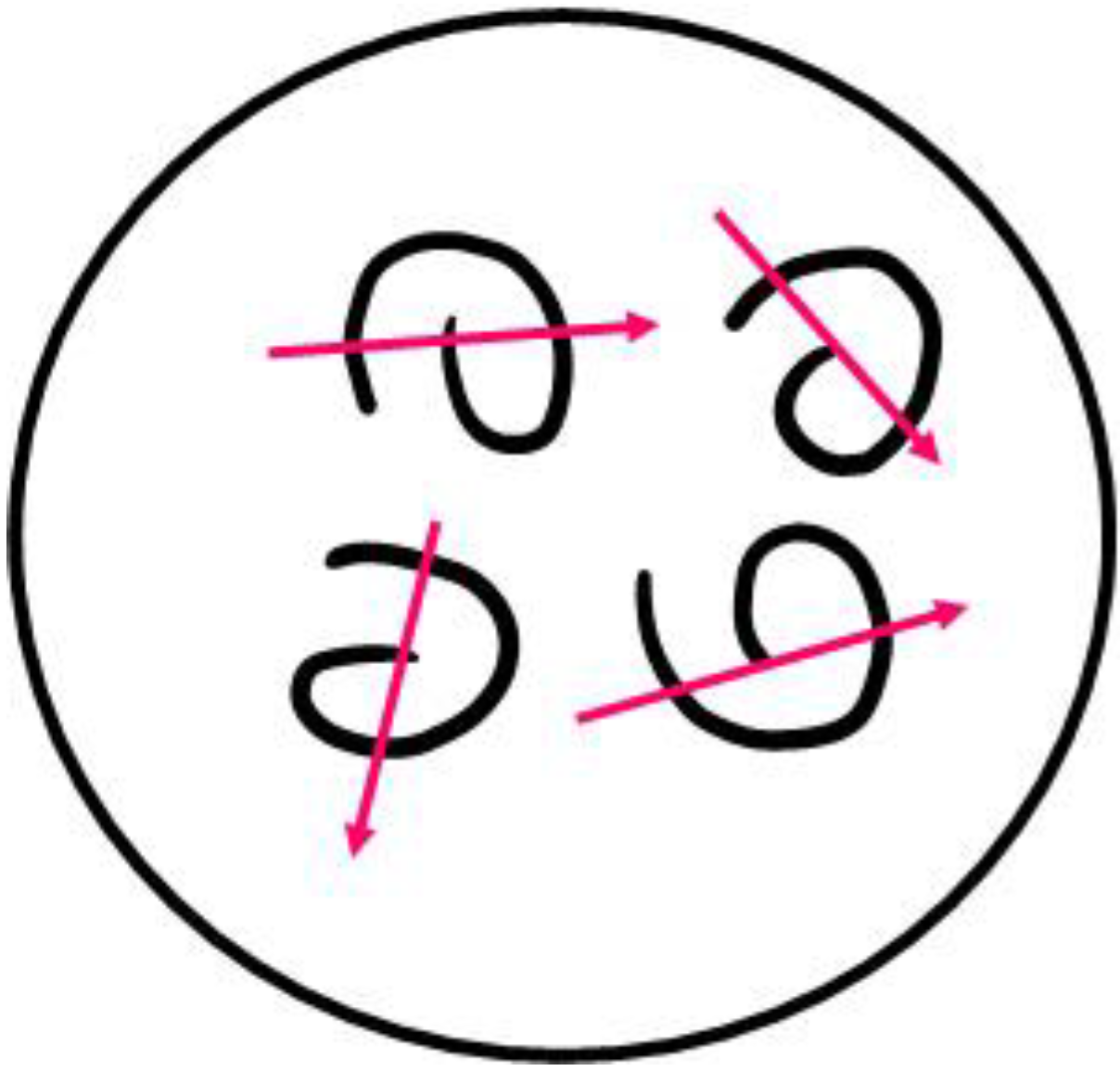 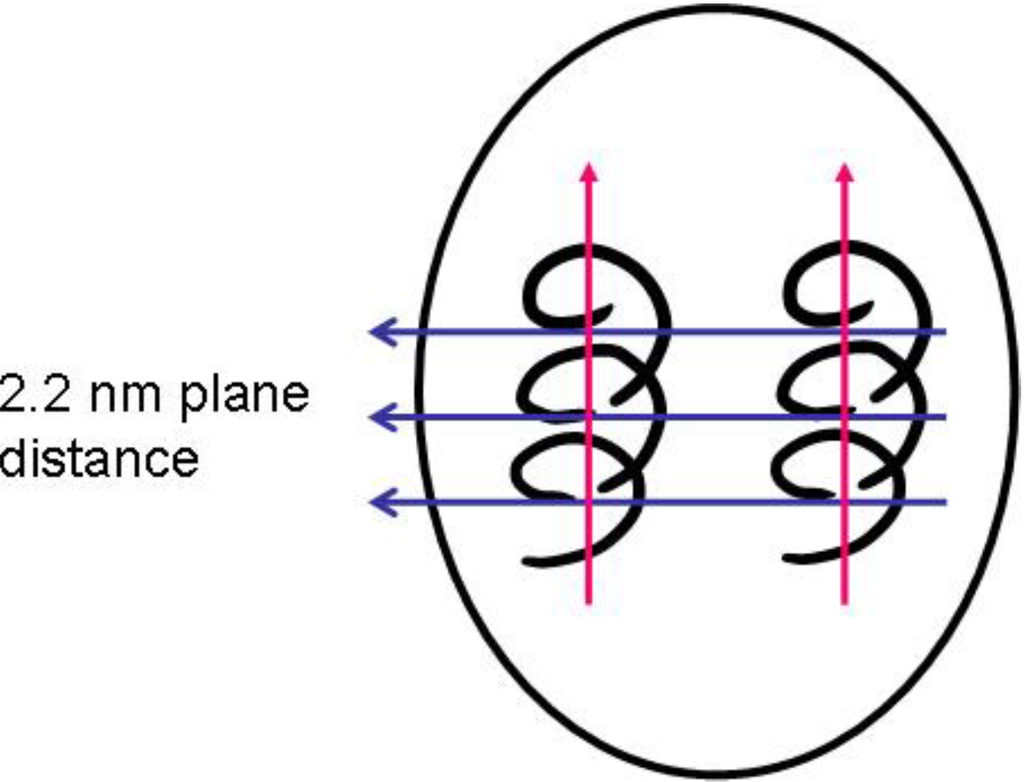 Preparation of samples: polyaniline polymerization was carried out using the parameters described in [27] with the modifications described in [28]. The dispersion and sample preparation was carried out as described in [31].
UV-Vis spectra of diluted dispersions were recorded by an UV-Vis spectrophotometer Specord S100 from Analytik Jena.
Cyclic voltammograms were recorded in a three-electrode electrochemical cell with a potentiostat/galvanostat PGSTAT 30 from Autolab. The OC test specimen served as working electrodes; a platinum wire as counter electrode; and a silver/silver chloride (in 3 M KCl) reference electrode was used.
X-ray diffractograms have been made at Avecia, Inc. [29]
Scanning tunneling microscopy was performed at University of Muenster [31] and [30].

It was possible to develop a new structure model for the organic metal polyaniline. This model fits all of the available information related to the structure of polyaniline. Generally spoken, it describes polyaniline as a material built from relatively short helically formed chains which assemble within primary particles. These particles, about 10 nm in size, are globular for the raw polymer, and the helices are relatively disordered. During dispersion, the conductivity increases and the conductive polymer becomes an organic metal: The helices are more ordered, building some more elongated helical structures, and the primary particle changes to be ellipsoidal.

Such long-term research would not be possible without many collaborators (first within Zipperling Kessler, then within Ormecon) to whom I am very grateful. I would especially like to mention Joerg Posdorfer, Holger Merkle, Melanie Rischka, Susanne Gleeson and Marco Thun who contributed to basic research as well. Many more people have contributed to application development in printed circuit board finishing, corrosion protection, OLEDs, electroluminescence, ITO replacement and others.