Water-soluble nonionic surfactant, pentaethylene glycol monododecyl ether, C12E5, spontaneously blooms to the surface of spin-cast hydrophobic polyisoprenes, generating hydrophilic surfaces. This system provides a simple model for hydrophilic chemical modification of rubbery polymers that demonstrates surprisingly rich, complex, and unexpected behaviour. The vertical depth profiles were quantified using neutron reflectometry (NR) using a novel procedure to account for undulations in the film thickness. Surface properties were characterized using contact angle analysis and atomic force microscopy (AFM). Despite the low surface tension of the toluene solvent used in film preparation and the low surface energy of the polyisoprene (PI) matrix, NR depth profiles revealed clear evidence of surfactant segregation. This surface layer was typically thicker than a monolayer, but incomplete, yet was remarkably stable with respect to dissolution, even when exposed to hundreds of thousands of times the volume of water required to dissolve all the surfactant on the surface. Despite the apparent resistance to removal from the surface, water exposure does alter the subsequent wettability of the surface, with a hydrophilic-to-hydrophobic transition occurring after rinsing. Complementary AFM images of these C12E5/cis-PI films showed unexpected strand-like features on the surface of the film, which we attribute to a non-uniform lateral distribution of some of the surfactant. This surface structure becomes more evident after rinsing, and it appears that there are two distinct populations of surfactant on the PI film surface. We conclude that some of the bloomed surfactant exists as layers, which are relatively inert with respect to rinsing or surface modification, and some is laterally inhomogeneous. This latter population is primarily responsible for surface wetting behaviour but is not detected by specular NR. View Full-Text
Keywords: surface modification; hydrophobicity; blooming; segregation; surfactant; poly(isoprene) surface modification; hydrophobicity; blooming; segregation; surfactant; poly(isoprene)
►▼ Show Figures 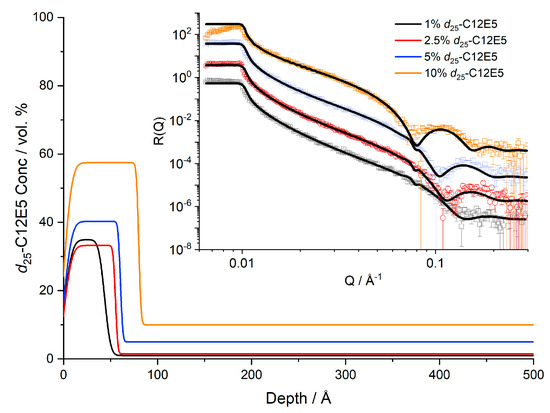 Matthew A. Litwinowicz
PhD student, Durham University
Zoom | Orient | As Lines | As Sticks | As Cartoon | As Surface | Previous Scene | Next Scene
We use cookies on our website to ensure you get the best experience. Read more about our cookies here.
Accept
We have just recently launched a new version of our website. Help us to further improve by taking part in this short 5 minute survey here. here.
Never show this again