:
Poly(dimethylsiloxane) (PDMS) has been extensively used as an electroactive polymer material because it exhibits not only excellent moldability but also mechanical properties sufficient enough for electroactive performance despite low dielectric permittivity. Its low dielectric property is due to its molecular non-polarity. Here, we introduce a polar group into a PDMS elastomer by using vinyl acetate (VAc) as a crosslinker to improve the dielectric permittivity. We synthesized a high-molecular weight PDMS copolymer containing vinyl groups, namely poly(dimethylsiloxane-co-methylvinylsiloxane) (VPDMS), and prepared several of the VPDMS solutions in VAc. We obtained transparent PDMS films by UV curing of the solution layers. Electromechanical actuation-related physical properties of one of the UV-cured films were almost equivalent to or superior to those of platinum-catalyzed hydrosilylation-cured PDMS films. In addition, saponification of the UV-cured film significantly improved the electrical and mechanical properties (ɛ′ ~ 44.1 pF/m at 10 kHz, E ~ 350 kPa, ɛ ~ 320%). The chemical introduction of VAc into PDMS main chains followed by saponification would offer an efficacious method of enhancing the electroactive properties of PDMS elastomers.
Keywords:
elastomer; poly(dimethylsiloxane); photocuring; vinyl acetate; saponification; permittivity

Poly(dimethylsiloxane) (PDMS) is widely known to be a fluid polymer even if it has a high molecular weight because the greater angle and higher length of the Si–O–Si bond in the PDMS main chains in comparison to the C–C–C bond make its chain motion free [1,2]. PDMS can be crosslinked and solidified mainly by a platinum-catalyzed reaction of vinyl groups with hydridosilyl groups in the main chains [2,3]. PDMS shows excellent moldability for those reasons. The vinyl or hydridosilyl groups can be introduced into PDMS by a copolymerization method. The vinyl group-containing PDMS generally has a higher molecular weight than the hydridosilyl group-containing PDMS which acts as a crosslinker. Since the two PDMSs are mechanically mixed together just before shape forming and thermal curing, the platinum-catalyzed reaction cannot uniformly occur during curing, resulting in heterogenous mechanical properties of the PDMS product. Nevertheless, PDMSs have been used as a shapable material for nanoimprint stamps, microfluidic chips, electronic skins, wearable sensors, and actuators owing to their transparency, biocompatibility, and flexibility, in addition to their moldability [4,5,6,7,8,9,10]. However, the other characteristics such as hydrophilicity and dielectric permittivity need to be tuned or improved for effective application of PDMS to the appropriate devices [11,12,13]. PDMS can be modified via polymer reactions or blending methods. These methods show a low degree of efficiency for the preparation of modified PDMS or give rise to deteriorate its own properties such as transparency and flexibility [14,15,16]. In order to avoid disadvantages of the platinum-catalyzed reaction or to form a designed pattern by using a mask or a direct laser, the photo-crosslinking reaction is used to solidify PDMS [6,17,18].
In this study, we tried to enhance the dielectric property of a PDMS film even without deterioration in the other physical properties by substituting the hydridosilyl group-containing PDMS with vinyl acetate (VAc) as a crosslinker. The crosslinking reaction between the vinyl groups in PDMS and VAc is expected upon UV irradiation. Acetate moieties in VAc-grafted or -crosslinked PDMS can be converted to hydroxyl groups after saponification, resulting in improvement of the dielectric permittivity, as well as hydrophilicity, of PDMS. We know that the introduction of hydroxyl groups into nonpolar polymers improves their dielectric properties [19]. First of all, we examined the possibility of forming a film from the vinyl group-containing PDMS/VAc solution layer under UV curing. Further, we evaluated the electrical, mechanical, and optical properties of the UV-cured PDMS films before and after saponification.

2.2. Preparation of VPDMS Solutions in Vinyl Acetate and Film Fabrication

After 1.0 mol % of 1-hydroxycyclohexyl phenyl ketone was completely dissolved in vinyl acetate (VAc), the solution was uniformly mixed with VPDMS for 1 day. The VAc concentration was adjusted to ca. 10, 20, and 30 wt %. The polymer solution was placed for a time in order to remove air bubbles formed during agitating. The VPDMS solution was poured on a glass plate and the solution layer was cast with a doctor’s knife. The layer was UV-irradiated under nitrogen for 10 min and dried at 60 °C under vacuum for 4 h to get rid of the unreacted VAc.

For preparation of an aqueous saponification solution, 8.0 g of sodium sulfate and 10.0 g of sodium hydroxide were dissolved in 100 g of a mixture of water and methanol (9:1, wt %). After the UV-cured PDMS film was dipped into the saponification solution and treated at 40 °C for 24 h with stirring, it was thoroughly washed with water. Then, the film was vacuum-dried at 60 °C for 4 h.
The other experimental procedures are also explained in detail in the Supporting Information.

We developed a UV-cured poly(dimethylsiloxane) (PDMS) film with high dielectric and optical properties, as well as a low initial modulus. We introduced a lot of vinyl groups into PDMS and prepared the PDMS solutions in vinyl acetate (VAc) in order to achieve a crosslinked PDMS film containing hydroxyl groups. As designed, films were simply prepared by photocuring of the solution layers and VAc was chemically attached and grafted to PDMS through the curing process. One of the UV-cured PDMS films exhibited a low initial modulus and improved storage permittivity, along with high transparency. Saponification led the acetate groups to convert the hydroxyl groups in the UV-cured film, resulting in a rise in the initial modulus and strain, as well as storage permittivity, of the film. The UV-cured PDMS film, whether saponified or not, is more advantageous than platinum-catalyzed hydrosilylation-cured PDMS films to apply to dielectric elastomer actuators in terms of not only electromechanical actuation but also the fabrication process. In a continuation of our work, we will examine the potentiality of using the UV-cured elastomer as an electroactive polymer.

This work has been supported by an Electronics and Telecommunications Research Institute (ETRI) grant funded by the Korean government (20ZS1200, Fundamental Technology Research for Human-Centric Autonomous Intelligent Systems).

The authors thank Joo Yeon Kim (ETRI) for the measurement of the water contact angle. 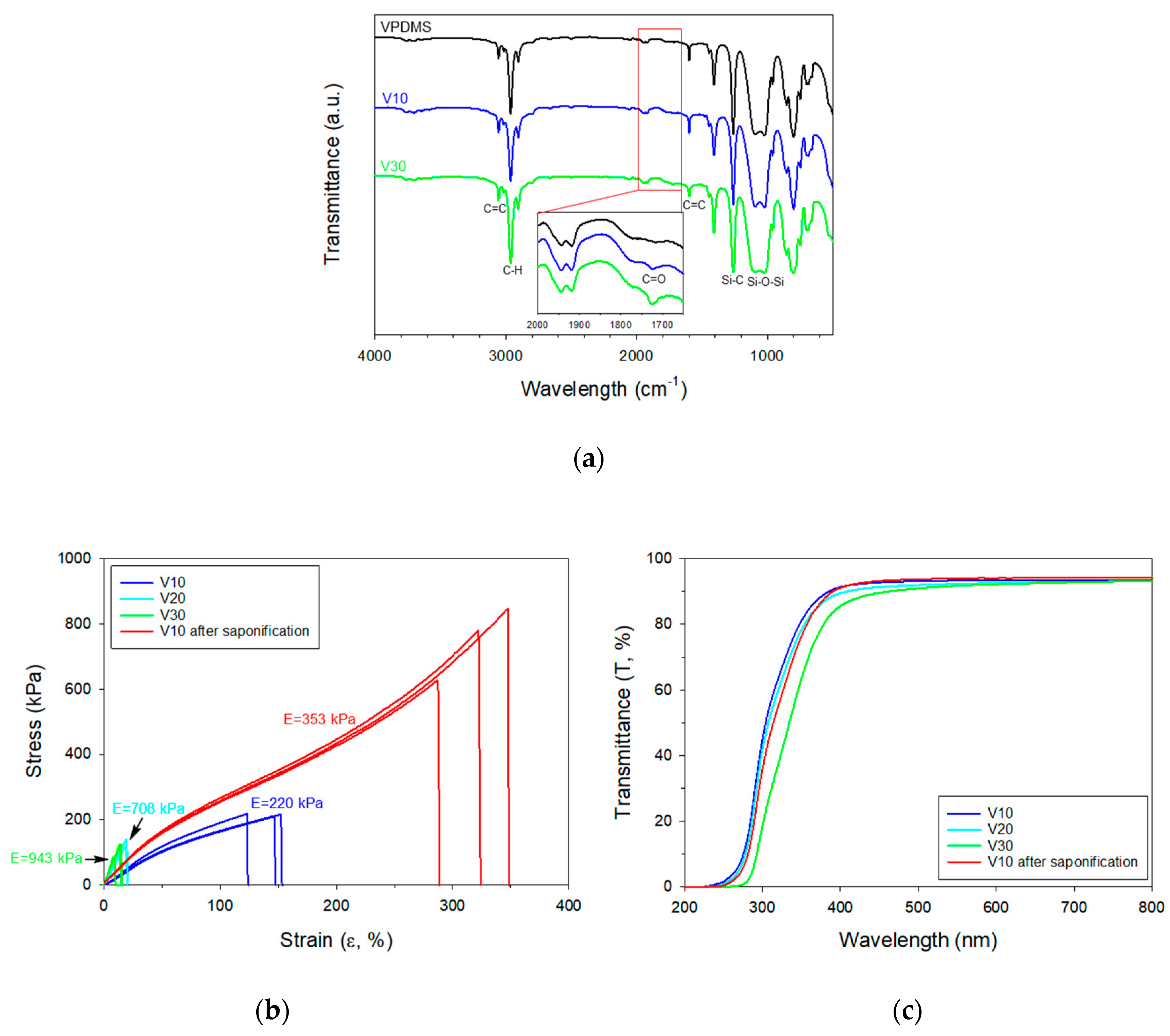