Atrazine (ATZ) is an herbicide which is applied to the soil, and its mechanism of action involves the inhibition of photosynthesis. One of its main functions is to control the appearance of weeds in crops, primarily in corn, sorghum, sugar cane, and wheat; however, it is very toxic for numerous species, including humans. Therefore, this work deals with the adsorption of ATZ from aqueous solutions using nanocomposite materials, synthesized with two different types of organo-modified clays. Those were obtained by the free radical polymerization of 4-vinylpyridine (4VP) and acrylamide (AAm) in different stoichiometric ratios, using tetrabutylphosphonium persulfate (TBPPS) as a radical initiator and N,N′-methylenebisacrylamide (BIS) as cross-linking agent. The structural, morphological, and textural characteristics of clays, copolymers, and nanocomposites were determined through different analytical and instrumental techniques, i.e., X-ray diffraction (XRD), Fourier-transform infrared spectroscopy (FTIR), and thermogravimetric analysis (TGA). Adsorption kinetics experiments of ATZ were determined with the modified and synthesized materials, and the effect of the ratio between 4VP and AAm moieties on the removal capacities of the obtained nanocomposites was evaluated. Finally, from these sets of experiments, it was demonstrated that the synthesized nanocomposites with higher molar fractions of 4VP obtained the highest removal percentages of ATZ. View Full-Text
Keywords: clay–polymer nanocomposites; atrazine; radical polymerization; hexadecyltrimethylammonium bromide; phenyltrimethylammonium chloride; FTIR; TGA; adsorption clay–polymer nanocomposites; atrazine; radical polymerization; hexadecyltrimethylammonium bromide; phenyltrimethylammonium chloride; FTIR; TGA; adsorption
►▼ Show Figures 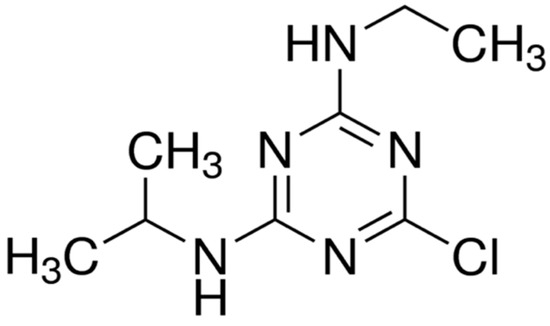 
Ramírez-Gómez, Jorge A.; Illescas, Javier; Díaz-Nava, María C.; Muro-Urista, Claudia; Martínez-Gallegos, Sonia; Rivera, Ernesto. 2019. "Synthesis and Characterization of Clay Polymer Nanocomposites of P(4VP-co-AAm) and Their Application for the Removal of Atrazine." Polymers 11, no. 4: 721.