The effect of abrasive shape on the three-body abrasion behaviors of monocrystalline silicon was investigated via molecular dynamics. The axial ratio of abrasive particle varied from 1.00 to 0.40 to mimic abrasive shape. It has been observed that the particle’s movement became sliding instead of rolling when the axial ratio was smaller than a critical value 0.46. In the abrasion process, the friction force and normal force showed an approximately sinusoid-like fluctuation for the rolling ellipsoidal particles, while the front cutting of particle caused that friction force increased and became larger than normal force for sliding particles. The phase transformation process was tracked under different particle’ movement patterns. The Si-II and Bct5 phase producing in loading process can partially transform to Si-III/Si-XII phase, and backtrack to original crystal silicon under pressure release, which also occurred in the abrasion process. The secondary phase transformation showed difference for particles’ rolling and sliding movements after three-body abrasion. The rolling of particle induced the periodical and inhomogeneous deformation of substrates, while the sliding benefited producing high-quality surface in chemical mechanical polishing (CMP) process. This study aimed to construct a more precise model to understand the wear mechanism benefits evaluating the micro-electro-mechanical systems (MEMS) wear and CMP process of crystal materials. View Full-Text
Keywords: three-body abrasion; phase transformation; monocrystalline silicon; abrasive shape; molecular dynamics three-body abrasion; phase transformation; monocrystalline silicon; abrasive shape; molecular dynamics
►▼ Show Figures 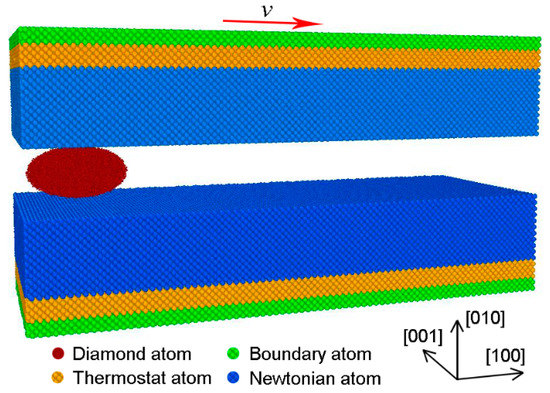