Incorporating the Thiazolo[5,4-d]thiazole Unit into a Coordination Polymer with Interdigitated Structure

The linker 2,5-di(4-pyridyl)thiazolo[5,4-d]thiazole (Dptztz), whose synthesis and structure is described here, was utilized together with benzene-1,3-dicarboxylate (isophthalate, 1,3-BDC2−) for the preparation of the two-dimensional coordination network [Zn(1,3-BDC)Dptztz]·DMF (DMF = dimethylformamide) via a solvothermal reaction. Compound [Zn(1,3-BDC)Dptztz]·DMF belongs to the class of coordination polymers with interdigitated structure (CIDs). The incorporated DMF solvent molecules can be removed through solvent exchange and evacuation such that the supramolecular 3D packing of the 2D networks retains porosity for CO2 adsorption in activated [Zn(1,3-BDC)Dptztz]. The first sorption study of a tztz-functionalized porous metal-organic framework material yields a BET surface of 417 m2/g calculated from the CO2 adsorption data. The heat of adsorption for CO2 exhibits a relative maximum with 27.7 kJ/mol at an adsorbed CO2 amount of about 4 cm3/g STP, which is interpreted as a gate-opening effect.
Keywords: coordination polymer; MOF; gate-opening; thiazolo[5,4-d]thiazole; mixed-ligand coordination polymer; MOF; gate-opening; thiazolo[5,4-d]thiazole; mixed-ligand

Metal-organic frameworks are an intensively studied class of porous materials. Due to the immense quantity of possible inorganic and organic building units several applications are discussed (e.g., gas storage and separation, catalysis, sensing and heat transformation) [1,2,3,4,5,6,7,8,9,10,11,12,13]. Many different organic functionalities have been introduced into the frameworks either by a priori ligand functionalization or by post synthetic modification [14,15,16]. 4,4′-Biypridine based ligands have been used to construct a diverse set of different topologies (e.g., one-dimensional chains, ladders, two-dimensional and three-dimensional networks) [17]. 4,4′-Bipyridine ligands are also widely used in the synthesis of open network structures in combination with dicarboxylate ligands (e.g., terephthalate, isophthalate) via the so called mixed-ligand strategy [18,19]. Through functionalization of the organic ligands, the pore surface of those mixed-ligand MOFs can be tuned to enhance the selectivity in their sorption or sensing properties [20,21,22,23]. One famous family of mixed-ligands MOFs are the CIDs (coordination polymers with interdigitated structure) popularized by Kitagawa and co-workers. CIDs consist of an angular ligand (e.g., isophthalate, benzophenone-4,4′-dicarboxylate, azulene-1,6-dicarboxylate) and a 4,4′-bipyridine derivative and divalent transition metal ions. CIDs show very intriguing sorption properties due to their potential for functionalization and often inherent structural flexibility [24,25,26,27,28,29].
The heterocyclic thiazolo[5,4-d]thiazole (tztz) system (Figure 1) experienced a renaissance in the last decade after it was first prepared by Ketcham et al. in the 1960s [30]. The tztz unit was incorporated into photoactive materials due to its rigid and planar structure and electron deficiency. Both Maes et al. and Dessi et al. reviewed the synthetic procedures to obtain tztz-containing small molecules and polymers as well as their application in the field of organic electronics (e.g., OFETs, OSCs) [31,32]. In contrast, the tztz unit has been reported only in relatively few coordination compounds (15 hits in the CCDC database). The first examples were ruthenium and copper complexes with the doubly chelating 2,5-di(2-pyridyl)thiazolo[5,4-d]thiazole synthesized by Steel et al. [33]. Coordination polymers with 2,5-thiazolo[5,4-d]thiazoledicarboxylic acid (Figure 1) were obtained by Cheetham et al. with alkaline earth metals, whose connectivities vary with the cation size, and by Palmisano et al. with some transition metals, in which the ligand shows a N,O-chelating mode [34,35]. D’Alessandro et al. incorporated the donor-acceptor ligand N,N′-(thiazolo[5,4-d]thiazole-2,5-diylbis(4,1-phenylene))bis(N-(pyridine-4-yl)pyridin-4-amine into a two-dimensional zinc MOF and studied its electrochemical properties [36]. Recently the same group published the spectroelectrochemical properties of a ruthenium coordination complex with this ligand [37]. Additionally, Dai et al. synthesized tztz-linked microporous organic polymers, which show a high CO2:N2 selectivity [38].
Herein, we present the synthesis, structural analysis and the sorption properties of a new coordination polymer with interdigitated structure of the formula [Zn(1,3-BDC)Dptztz] consisting of Zn2+ ions, isophthalate and the 4,4′-bipyridine derivative 2,5-di(4-pyridyl)thiazolo[5,4-d]thiazole (Dptztz) (Figure 1, Scheme 1).

Suitable crystals were carefully selected under a polarizing microscope, covered in protective oil and mounted on a 0.05 mm cryo loop. Data collection: Bruker Kappa APEX2 CCD X-ray diffractometer (Bruker AXS Inc., Madison, WI, USA) with microfocus tube, Mo-Kα radiation (λ = 0.71073 Å), multi-layer mirror system, ω-scans; data collection with APEX2 [39], cell refinement with SMART and data reduction with SAINT [39], experimental absorption correction with SADABS [40]. Structure analysis and refinement: All structures were solved by direct methods using SHELXL2014 [41,42]; refinement was done by full-matrix least squares on F2 using the SHELX-97 program suite. The hydrogen atoms for aromatic CH and for the amide group in DMF were positioned geometrically (C-H = 0.95 Å) and refined using a riding model (AFIX 43) with Uiso(H) = 1.2Ueq(C). The hydrogen atoms for CH3 of DMF were positioned geometrically (C-H = 0.98 Å) and refined using a riding model (AFIX 137) with Uiso(H) = 1.5Ueq(C). In [Zn(1,3-BDC)Dptztz] the thiazolothiazol (tztz) moiety was refined with a disorder model corresponding to a ring flip, which exchanges the S and N orientation, using PART n commands. The occupation factors of the S and N atoms were refined to about 0.904 for the A atoms and 0.096 for the B atoms. Thus, the disorder is relatively minor with only about 9.6% of the S and N atoms in the flipped position. The major atom tztz positions are designated as “A”, the minor ones as “B”. The minor positions could only be refined isotropically. The DMF crystal solvent molecule contained disorder in the two methyl groups, with two positions for each methyl group. This disorder does not give a perfect oriented Me2N group but we decided to keep the slightly disordered DMF molecule instead of removing its contribution with SQUEEZE. Each methyl group disorder was refined independently concerning the occupation factors. Crystal data and details on the structure refinement are given in Table 1. Graphics were drawn with DIAMOND [43]. Analyses on the supramolecular interaction were done with PLATON [44]. Phase purity and the representative nature of the single crystal was verified by positively matching the simulated and experimental powder X-ray diffractogram (PXRD) of the as-synthesized sample (Figure 2). CCDC 1812892 and 1812893 contain the supplementary crystallographic data for this paper. These data can be obtained free of charge via http://www.ccdc.cam.ac.uk/conts/retrieving.html.

The 4,4′-dipyridyl N,N′-donor ligand Dptztz with the central thiazolo[5,4-d]thiazole unit was successfully synthesized and its crystal structure was determined for the first time. With the linker Dptztz, the thiazolo[5,4-d]thiazole-unit was integrated into a solvent-filled coordination network of the formula [Zn(1,3-BDC)Dptztz]·DMF belonging to the class of coordination polymers with interdigitated structure (CIDs). Synthesis of the coordination network was carried out via a mixed ligand strategy in a solvothermal reaction. Interdigitation between the 2D layers to a 3D supramolecular network appears to be controlled by π-π interactions between isophthalate aryl rings and CH-π interactions between isophthalate and pyridyl moieties. Activated [Zn(1,3-BDC)Dptztz] shows a BET surface of 417 m2/g calculated from CO2 adsorption data, while N2 which unlike CO2 is not as polarizable and has no quadrupole moment is not adsorbed. The heat of adsorption for CO2 exhibits a relative maximum at a quantity adsorbed of about 4 cm3/g STP with 27.7 kJ/mol, which is interpreted as a gate-opening effect. This is the first report of the sorption characteristics of a tztz-functionalized porous MOF material.

The following are available online at www.mdpi.com/2073-4352/8/1/30/s1. Figure S1: Section of the packing diagram of 2,5-di(4-pyridyl)thiazolo[5,4-d]thiazole (Dptztz), showing (a) the complementary C1-H1⋯N1 hydrogen bonds and (b) the π-π interactions, thereby giving a supramolecular layer in the ab plane; Figure S2: Asymmetric unit of [Zn(1,3-BDC)Dptztz]·DMF showing the ring-flip disorder of the thiazolothiazol moiety; Figure S3: π-π and CH-π interactions between the 2D layers in [Zn(1,3-BDC)Dptztz]; Figure S4: Heat of adsorption curve of MIL-53-Cr; Table S1. Distances [Å] and angles [°] for the shortest π-π and CH-π supramolecular interactions between the 2D layers in [Zn(1,3-BDC)Dptztz].

The work was supported by the Federal German Ministry of Education and Research (BMBF) under grant-# 03SF0492C (Optimat). 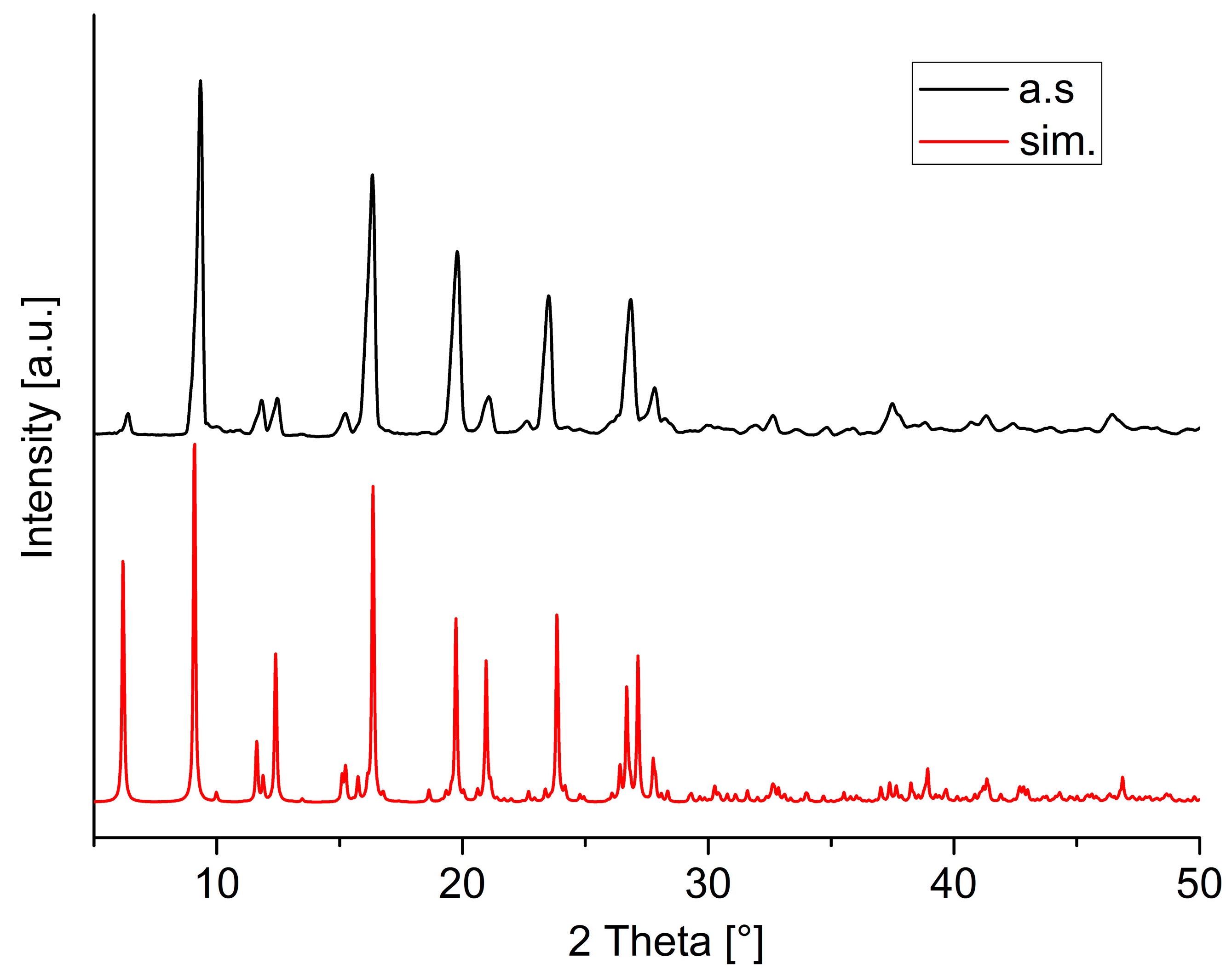 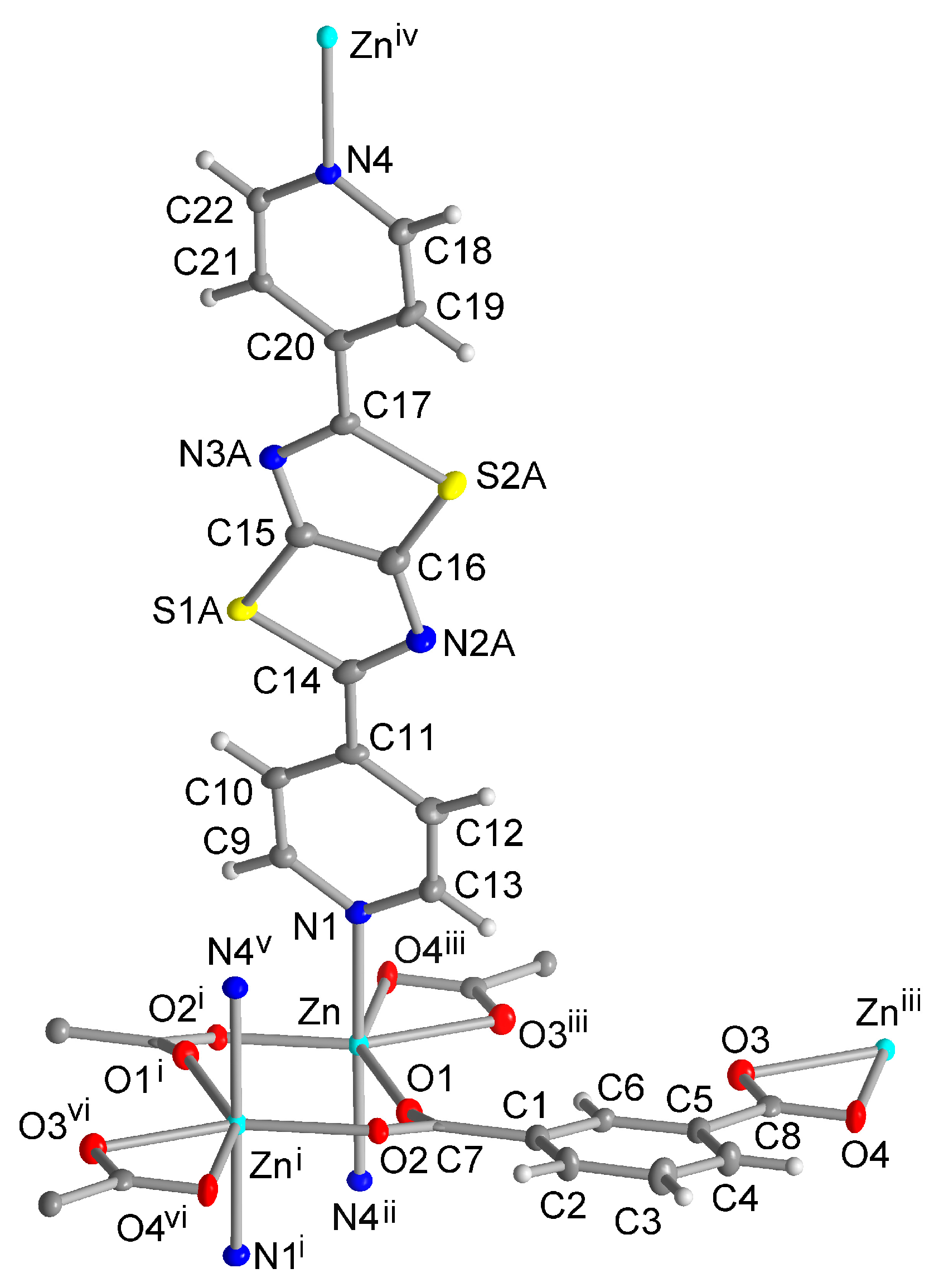 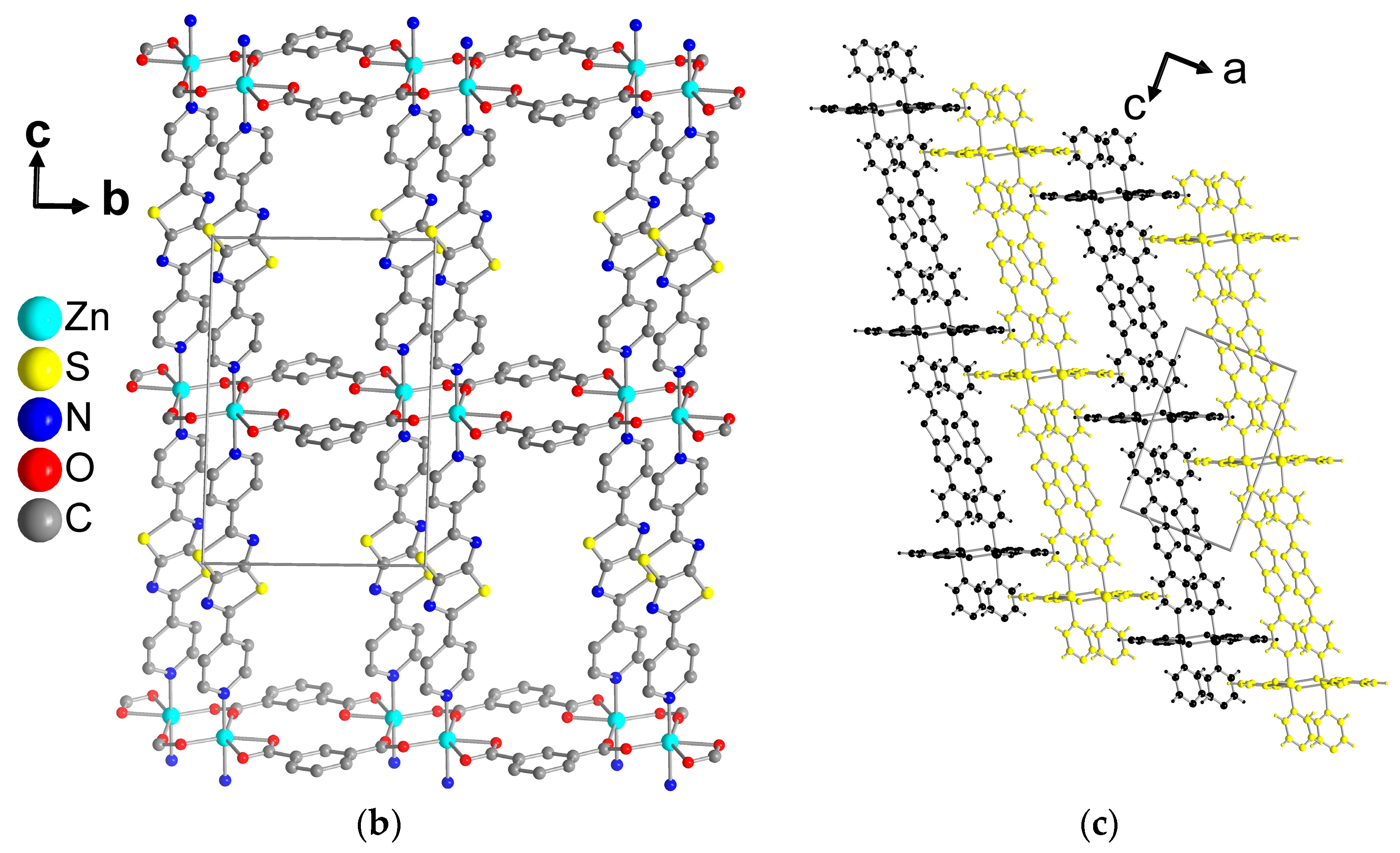 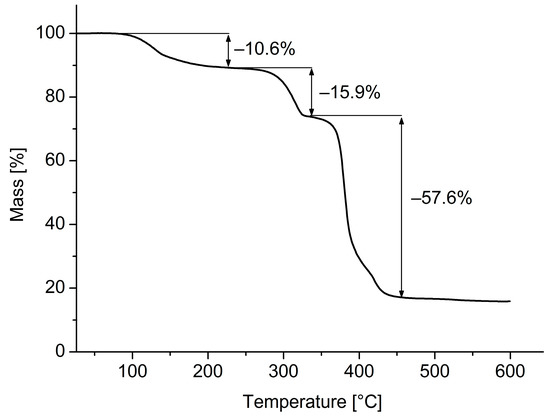 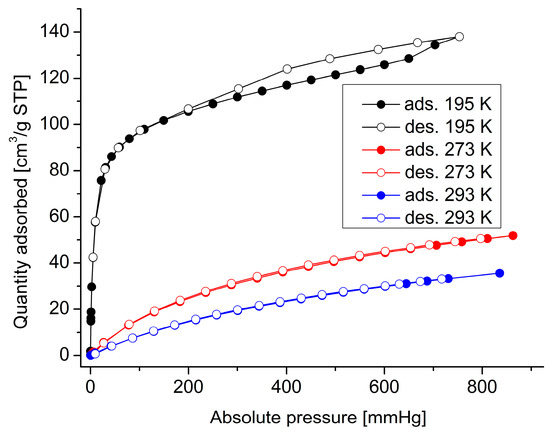 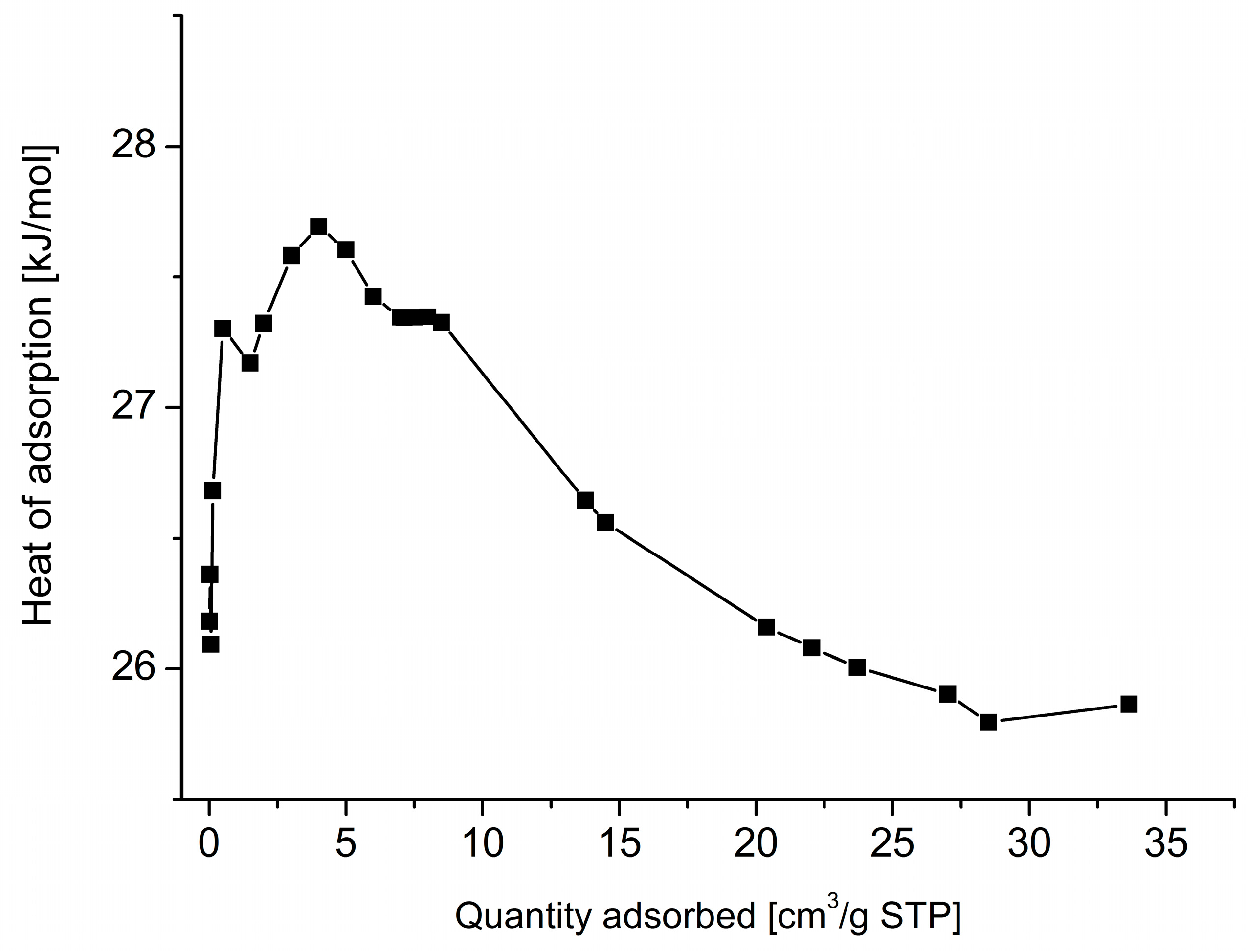 Table 3. CO2 sorption data for [Zn(1,3-BDC)Dptztz].
Table 3. CO2 sorption data for [Zn(1,3-BDC)Dptztz].
1 at p/p0 = 0.50, 2 at p/p0 = 0.03, 3 at p/p0 = 0.017.
© 2018 by the authors. Licensee MDPI, Basel, Switzerland. This article is an open access article distributed under the terms and conditions of the Creative Commons Attribution (CC BY) license (http://creativecommons.org/licenses/by/4.0/).
We use cookies on our website to ensure you get the best experience. Read more about our cookies here.
Accept
We have just recently launched a new version of our website. Help us to further improve by taking part in this short 5 minute survey here. here.
Never show this again