Dynamics of Radiation Damage in AlN Ceramics under High-Dose Irradiation, Typical for the Processes of Swelling and Hydrogenation

The use of nitride ceramics, in particular AlN, as structural materials for nuclear power is primarily limited by their resistance to swelling and hydrogenation processes due to the accumulation of poorly soluble helium and hydrogen ions in the structure of the surface layer. In this regard, research in this area is of great importance not only from a fundamental point of view, but also practical, since any new data on radiation resistance can make a great contribution to the development of the theory of resistance to radiation influences of structural materials of a new generation. This work is devoted to a systematic study and comparative analysis of the dynamics of radiation damage during high-dose irradiation with protons and helium ions in nitride ceramics, which have great potential for use as structural materials for GenIV reactors. The choice of irradiation doses of 1 × 1017–5 × 1017 ion/cm2 is due to the possibility of modeling the processes of radiation damage characteristic of displacements of 10–50 dpa. During the study, the dependences of the change in the dielectric and conductive characteristics of nitride ceramics depending on the radiation dose, as well as on the type of ions, were established. The kinetics of degradation and accelerated aging was determined depending on the type of exposure. The mechanical and strength properties of ceramics were determined.
Keywords: nitride ceramics; swelling; degradation; hydrogenation nitride ceramics; swelling; degradation; hydrogenation

The development concepts of nuclear energy and reactor engineering of the GenIV generation reactors are based on the long-term operation of structural materials under conditions of high coolant temperatures, high doses of damage (10–100 dpa), mechanical friction, and other damage [1,2,3]. To date, to increase the efficiency of GenIV generation reactors, it has been proposed to use higher temperatures than in WWR and WWER reactors, which reach 500–700 °C. Such temperatures make it almost impossible to use standard materials to create the first walls and protective circuits of the reactor, and requires new technical solutions and new structural materials [4,5]. In this regard, in recent decades, great attention has been paid to basic research in the field of obtaining new structural materials, as well as comprehensive study of their resistance to radiation and mechanical damage, changes in thermal conductivity, and performance at high radiation doses [6,7,8,9,10].
One class of prospective materials for application as a basis for structural radiation resistant materials are nitride ceramics, i.e., AlN, Si3N4, TiN, ZrN, etc. [11,12,13,14]. Interest in these materials is due to high thermal conductivity, melting temperature, mechanical strength, and resistance to external effects and aggressive media.
However, in spite of the good performance of nitride ceramics, which makes them promising candidates for further use as structural materials, questions remain regarding their resistance to radiation damage, such as hydrogen disturbance and helium swelling that occurs in the surface layer of ceramics under prolonged exposure to a coolant, and exposure [15,16,17]. The accumulation of poorly soluble light ions in the structure can lead to their agglomeration and further formation of porous gas-filled inclusions that can result in significant degradation of the material and the formation of microcracks. Moreover, in most cases, the polycrystallinity of ceramics with several grain orientations can lead to uneven damage. In the case of large-dose irradiation of 1 × 1017–5 × 1017 ion/cm2, according to the literature, from 0.1 to 3 at.% of implanted ions can accumulate in the ceramic structure, which leads to the formation of gas-filled bubbles, the subsequent evolution of which can have a catastrophic effect on mechanical, strength, and conductive properties of ceramics [18,19,20].
Thus, the aim of this study is to study the impacts on the change, mechanical, strength, dielectric, and conductive characteristics of nitride ceramics depending on the dose of radiation, as well as on the type of ions. In addition, special attention is paid to determining the kinetics of degradation in the simulation of accelerated aging depending on the type of exposure.
The choice of aluminum nitride from a large number of other nitride materials (Si3N4, TiN, BN) as the object of study is due to its high resistance to most aggressive acids, including aqua regia, HF, good thermal conductivity, high rates of mechanical strength, and insulating properties. Great interest in this type of ceramic has been shown by material scientists involved in the development of materials for the new generation of Gen IV nuclear reactors [21,22,23]. The high stability of aluminum nitride to the effects of heavy ions, the absence of latent ion tracks in it after irradiation, and the low mobility of grains as a result of the accumulation of defects, makes this material one of the promising materials for use as the basis for the first wall of high-temperature nuclear reactors [24,25].
The novelty of the current scientific work consists of obtaining new data on the radiation resistance of AlN ceramics to high-dose irradiation with protons and helium ions and subsequent aging, as well as changes in properties due to external influences. As a rule, irradiation with doses higher than 1–3 × 1017 ion/cm2 is considered the initial dose of the initialization of the processes of blister formation and swelling of ceramic materials, which leads to an acceleration of degradation processes.

The object of the study was polycrystalline ceramics based on aluminum nitride (AlN) (see Figure 1a,b) with a hexagonal-type crystal structure and three main texture orientations: (100), (002), and (101). According to the method of production by sintering ceramics in an atmosphere of nitrogen (N2) (P = 760 mmHg) from alumina powders:
According to X-ray data, impurity inclusions of alumina remained in the ceramic structure, the concentration of which did not exceed 3–4%. The density of ceramics according to the passport data and X-ray diffraction analysis was 3.25–3.26 g/cm3, which is in good agreement with the density data for this type of ceramics. As a stabilizing additive, Y2O3 powder was used. The presence of oxide inclusions in the structure also led to an increase in the stability of nitride ceramics and, according to previous studies, these impurity inclusions have an isotropic distribution over the entire volume [26,27].
Ceramics were irradiated with the aim of modeling hydrogenation and helium swelling processes with two types of ions: (1) protons with an energy of 500 keV, the mean free path of which, according to the SRIM Pro 2013 program code (srim.org) [28], was 4.1 ± 0.2 μm; and 2) helium ions with an energy of 40 keV and path length of 400–500 nm. The radiation doses were 1 × 1017–5 × 1017 ion/cm2, which, according to the conversion to the atomic displacements (dpa), was 10–50 dpa. The concentration of implanted ions was calculated by Formula (2): where σ is the total cross section for defect formation in the case of irradiation with various ions, and Φ is the irradiation fluence.
The study of dielectric loss was carried out using the method of impedance spectroscopy performed on a HIOKI IM 3570 Impedance Analyzer, (Koizumi, Ueda, Nagano, Japan).
Thermal conductivity was measured using the stationary method of measuring the absolute longitudinal heat flux proposed in [29]. The coefficient of thermal conductivity was determined using Formula (3): where q is the heat flux density, W/m2; tc1 and tc2 are the temperature constants on the hot and cold sides of the wall, respectively, K; δ is the wall thickness, m; λ is the coefficient of thermal conductivity of the wall material, W/(m·K) [26]. The range of tc1 and tc2 as a result of thermal conductivity tests ranged from 300 to 1000 K. Ten independent measurements were made for each test sample.
The dynamics of changes in the morphology of the surface of ceramics before and after irradiation were studied using the scanning electron microscopy method performed using a “Hitachi TM3030” microscope (Hitachi Ltd., Chiyoda, Tokyo, Japan) with the following settings: Shooting mode—LEI, Current—20 μA, Accelerate voltage—2 kV, WD = 8 mm.
The kinetics of the degradation of ceramics before and after irradiation in the case of low-temperature degradation of the surface microstructure as a result of irradiation and aging, under accelerated degradation, was studied using the method of modeling the external effects of water vapor at a temperature of 150 °C and a pressure of 2.2–2.3 atm. Using these conditions for modeling aging and degradation processes allows accelerating the natural aging process, which takes years to complete. In the case of modeling, 1 hour of treatment is equivalent to 1.5–2.0 years of aging in vivo.

The paper presents the comparative results of the influence of large-dose irradiation with protons and helium ions on the properties of nitride ceramics, as well as the kinetics of degradation due to aging. It was established that for nitride ceramics, irradiation with helium ions at a dose of 5 × 1017 ion/cm2 leads to large effects of degradation and swelling as a result of the accumulation of helium bubbles in the structure of the surface layer. For both types of irradiation, it was found that a dose of 5 × 1017 ion/cm2 has a significant negative effect on the dielectric properties, the decrease of which is due to the occurrence of distortions and gas-filled voids in the structure of ceramics. In the course of life aging tests, it was found that in the case of proton irradiation, the decrease in crack resistance is in the range of 25–45% of the initial value depending on the radiation dose, and for samples irradiated with helium ions, the decrease in crack resistance ranges from 25 to 87%, depending on radiation doses. Moreover, the mechanisms of degradation of irradiated ceramics are different.

This research was funded by the Science Committee of the Ministry of Education and Science of the Republic of Kazakhstan (No. AP08051975). 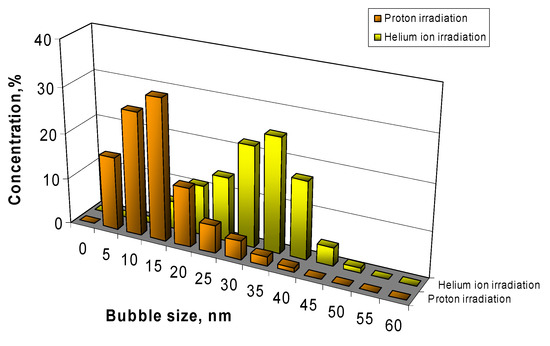 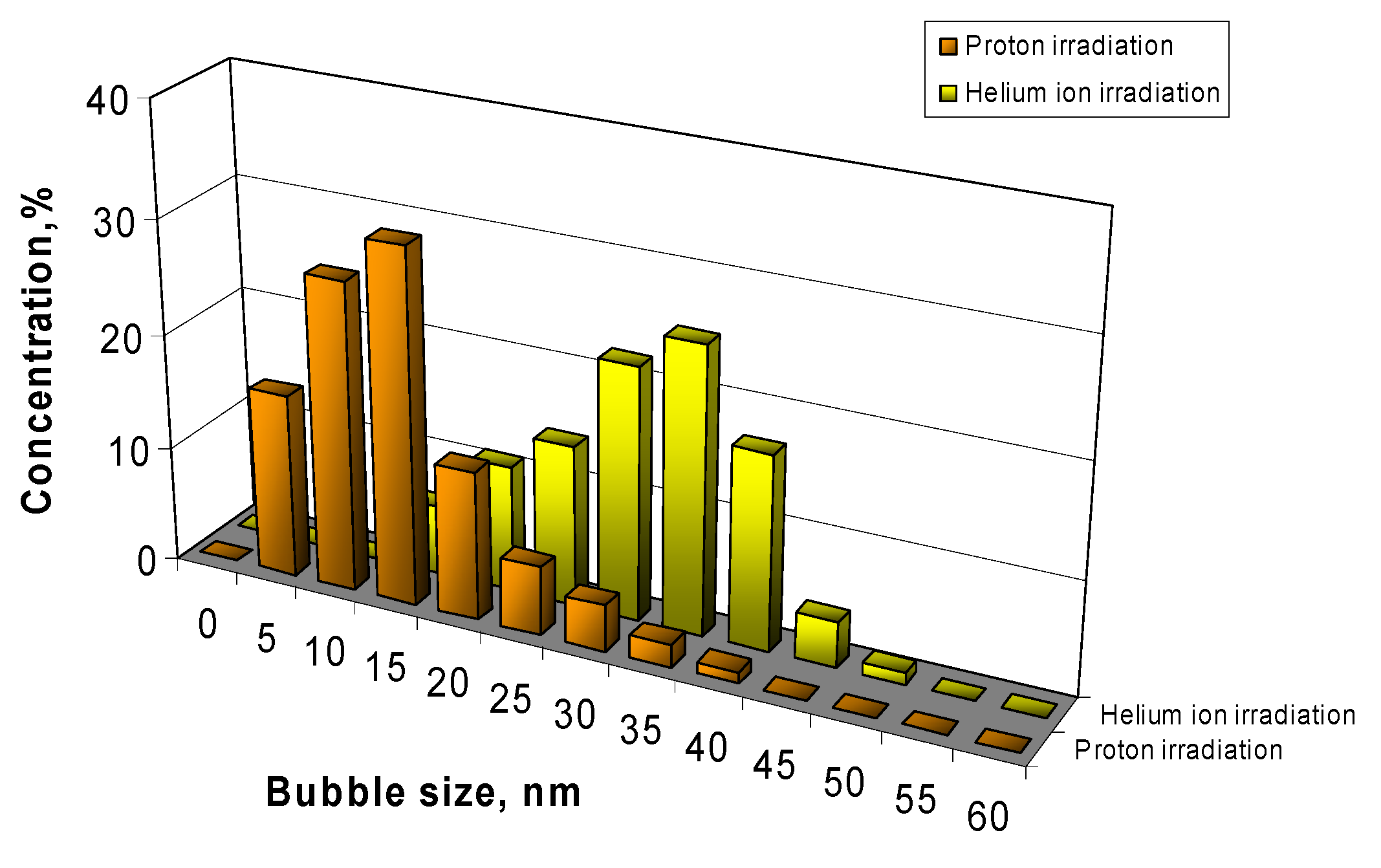 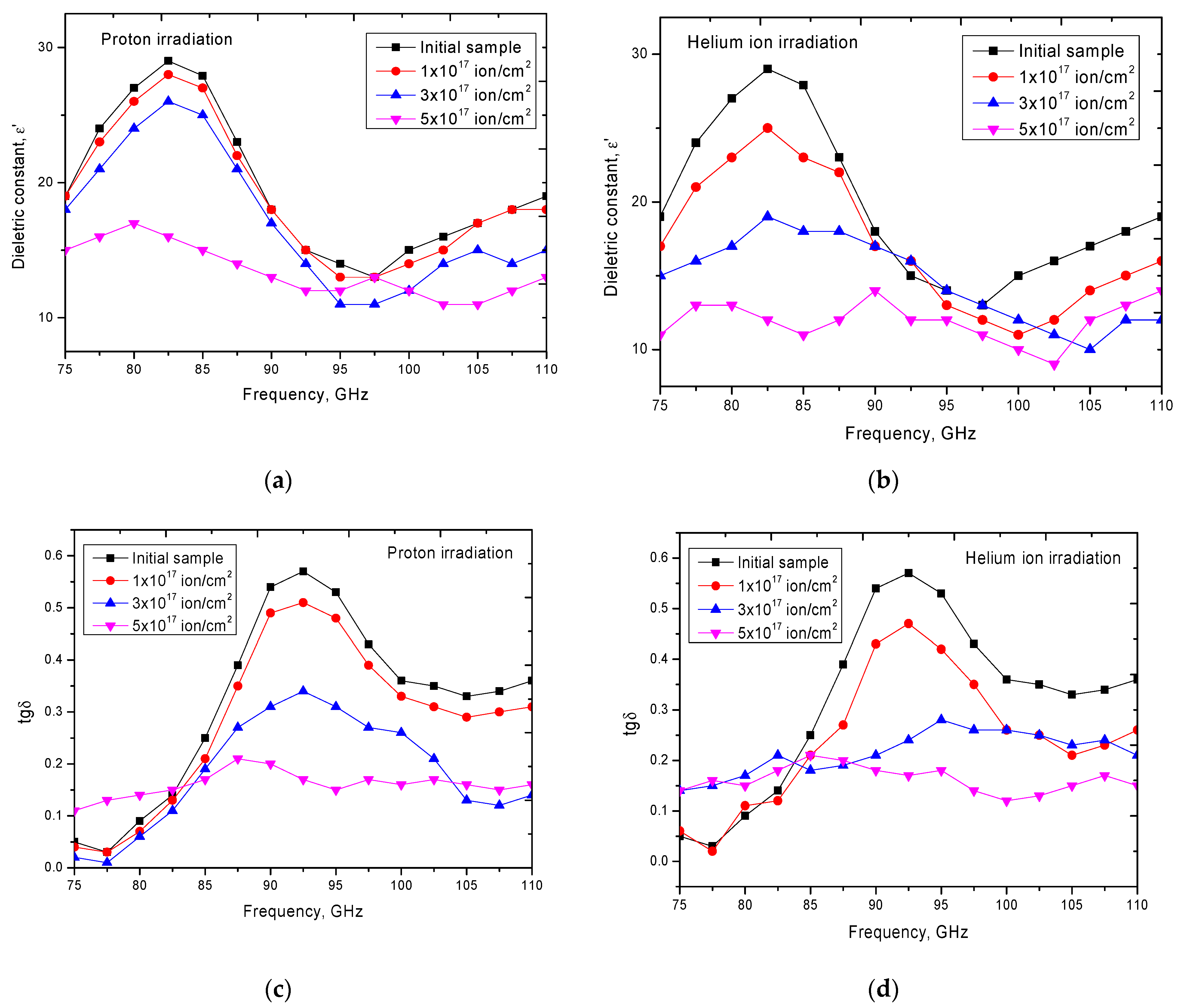 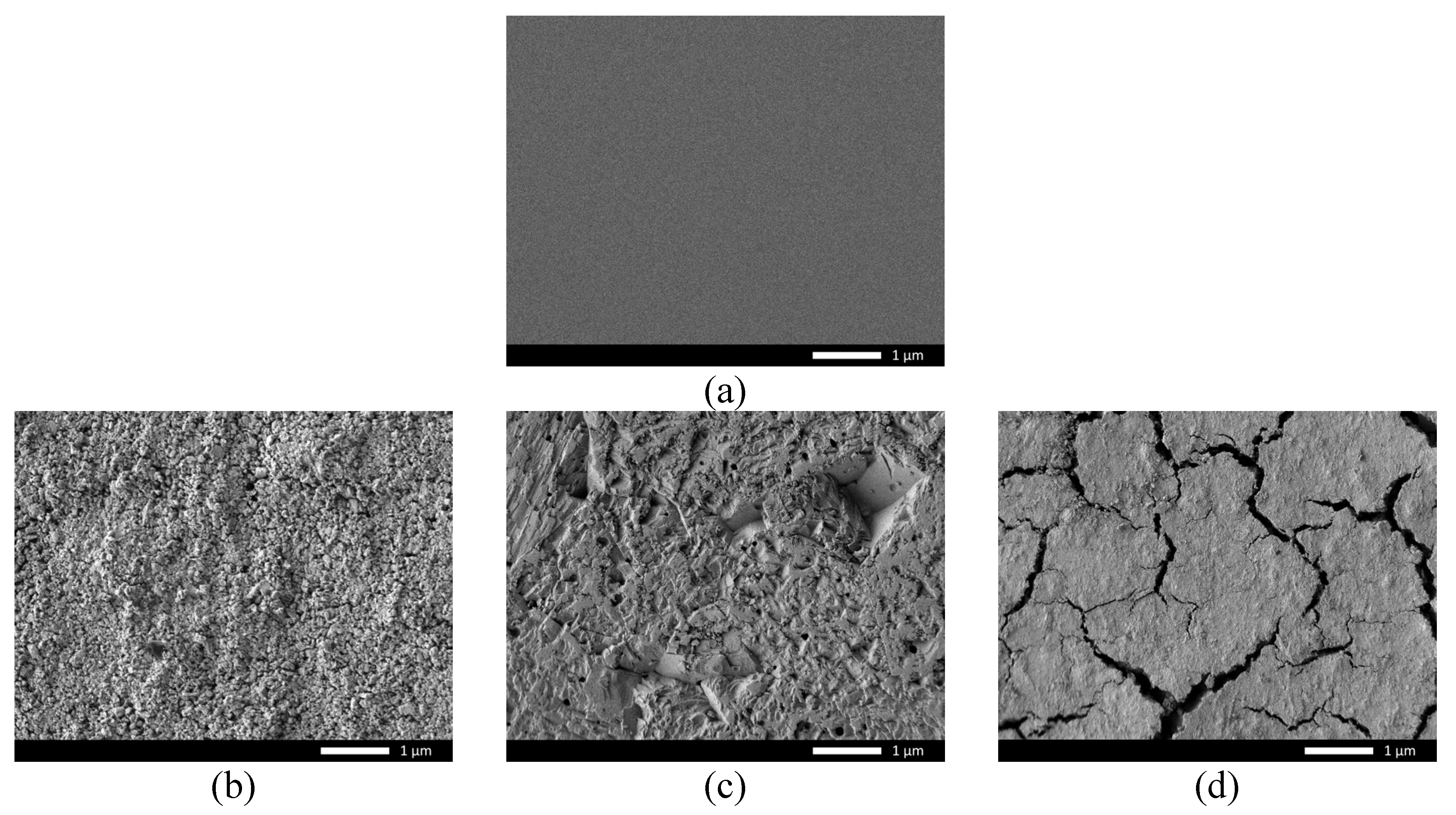