The Steps from Batchwise to Continuous Crystallization for a Fine Chemical: A Case Study
Previous Article in Special Issue

The traditional track system, a ballasted track, is still widely regarded as one of the favored options for new railway construction projects due to low construction costs and easy maintenance. However, this type of track requires frequent repairs as a result of periodic train loads [1,2,3]. Lee and Pyo [1] developed a quickly converting track system that converts ballasted railway tracks into concrete tracks using quick-hardening materials.
During the service time of ballasted railway tracks, fine abrasion dust particles (FADPs) of aggregates are generated from the deterioration of aggregates under repeated train loads [2]. Lee et al. [2] experimentally evaluated the influence of FADPs at the interface on the strength of quick-converting track concrete (QTC). They concluded that surface cleaning of aggregates is necessary in order to achieve target strength. Lee et al. [4] additionally assessed the effects of FADPs on interfacial fracture toughness (IFT) between quick-hardening mortar (QM) and ballast aggregates in order to develop a suitable QM with high IFT. They revealed that the use of coarser silica sands and silica fume could produce the required QTC strength with a minimum cleaning process of existing ballast aggregates.
However, the effects of FADPs on the IFT between the aggregate and the QM—and subsequently on the strength of QTC—are not yet fully understood. For instance, ballast aggregates are generally placed in an outside environment and can be easily exposed to water through rain or snow. It is well known that the amount of water in mixing concrete should be adjusted to correspond to the content of water saturation and surface condition of aggregates because the W/C ratio would change if water saturation of the aggregate is not constant [5]. Thus, it can be expected that the water saturation content of the aggregate would substantially affect the compressive strength of QTC.
This experimental study aims to further understand the effects of the aggregate surface condition on the strength development of QTC. The detailed purposes are to experimentally evaluate the effects of FADPs that are adhered to the surface of aggregates and the effects of different water saturation content of the aggregate on the IFT between the aggregate and the QM and, subsequently, on the strength development of QTC.

2. Aggregate Conditions and the Properties of Concrete

Table 1 shows the composition of the QM matrix. Note that high early strength cement was used in this research for the purpose of the fast construction of the converting track. Polycarboxylic acid superplistizer was used as a high-range water-reducing agent (HRWRA), produced by DongNam Co., Ltd. in South Korea. The setting retarder was provided by SsangYong Co. Ltd. in South Korea. The FADPs were produced containing aggregate powder as by-products during granite processing. The maximum particle size of FADPs is 0.075 mm, which is larger than that of cement (0.005~0.03 mm). The chemical components of the used materials are summarized in Table 2. The fineness of the quick hardening cement is 5400 cm2/g, which is greater than 3200 cm2/g for normal cement type Ⅰ, and the specific gravity is 2.85, which is less than 3.15 for normal cement type Ⅰ. Both types of sand contained a large amount of SiO2. The initial setting time of this quick-hardening mortar was 30 min, and more than 30 MPa of compressive strength can be obtained after two hours of curing, as shown in Table 3. It should also be noted that the dosage of the used setting retarder would change, according to the mixing environment and the target curing time.
Cylinder specimens (100 mm in diameter and 200 mm in height) were prepared for the compressive QTC strength tests conducted according to ASTM C 39 [22]. QTC specimens were prepared by pre-filling the granite coarse aggregate with a size of 22.4 to 63 mm inside the mold and then injecting the QM. It should be noted that a series of compressive strength tests were carried out because compressive strength is one of the direct indications of overall strength of the ballastless track system. To attach the FADPs onto the aggregate surface, the following steps were conducted: the required weight of FADPs was first measured and mixed with wet coarse aggregate; then, the wet aggregate was fully dried. Saturated aggregates were prepared after immersing the aggregates, in which FADPs were applied according to the parameters in water and removing excess moisture. Although loss of FADPs may occur through this process, it is considered to be a similar condition to the actual track system, e.g., under a meteorological phenomenon.
Figure 2 illustrates the geometry of the IFT samples, and Figure 3 provides photos that show the surface condition of aggregates that correspond to different amounts of FADPs and different aggregate water saturations. The granite aggregate was collected from railway ballast. It can be seen that there is about half of the moisture remaining in the aggregate without FADPs and 50% water saturation of the aggregate surface (Figure 3b). In addition, for the aggregate with 100% water saturation, the entire surface is wet. As the content of aggregate water saturation increases, it can be seen that FADPs are mixed with water on the aggregate surface (Figure 3d–f). All the sliced aggregates were assumed to have identical roughness based on the use of the same cutting method. All specimens were cured at room temperature to create the same environment as the actual track system.
The QM mixture was prepared using a laboratory planetary mixer with a 20 L capacity. The mixing process for QM can be found in Lee et al. [4]. The digital image correlation (DIC) method was adopted in this research to characterize the interfacial crack. Random speckles were applied on the surface of IFT samples for the DIC analysis, and Figure 4 shows the prepared IFT samples before and after the stone spray application.

The compressive strength of QTC was measured at the age of 7 d, under a 1.0 mm/min machine displacement rate, using a universal testing machine (UTM) with a 3000 kN capacity. The IFT test was carried out at 7 days of curing, following the same procedure used by Lee et al. [4]. A UTM with a 5 kN capacity was used and the load was applied with a speed of 0.5 mm/min using the displacement control, and the test setup is shown in Figure 5. Images for the DIC analysis were recorded using a high-speed camera and the DIC analysis after testing was performed using commercial DIC software (Tracking Eye Motion Analysis). In both tests, at least three specimens were prepared and tested.

Table 3 provides the compressive strength of the QM used in this study, while Table 4 provides the strength of QTC that corresponds to different surface conditions of the aggregate. Figure 6 summarizes the influences of contents and of water saturation contents on the IFT. The IFT was calculated using the formula found in Lee et al. [4], which is also given in fracture mechanics by Anderson [23].

The compressive strength of QTC and IFT between the aggregates and QM was investigated by changing the amount of FADPs on the surface of the aggregate and the content of aggregate water saturation. The key conclusions can be summarized as:
The results obtained in this study provide fundamental knowledge of the importance of the aggregate surface conditions for the strength development of QTC. Therefore, in order to efficiently apply the quick-converting method, further research is required to improve interfacial bond strength according to aggregate surface conditions. Therefore, research with additional variables is essential. The effects of precipitation on the strength of QTC during the curing period in the actual track system should be investigated in addition to the effects of aggregate water saturation.

The research described herein was sponsored by a grant from the R&D Program of the Korea Railroad Research Institute, Korea. This work was also supported by the National Research Foundation of Korea (NRF) grant funded by the Korea government (MSIT) (No. NRF-2019R1F1A1060906). The opinions expressed in this paper are those of the authors and do not necessarily reflect the views of the sponsors. 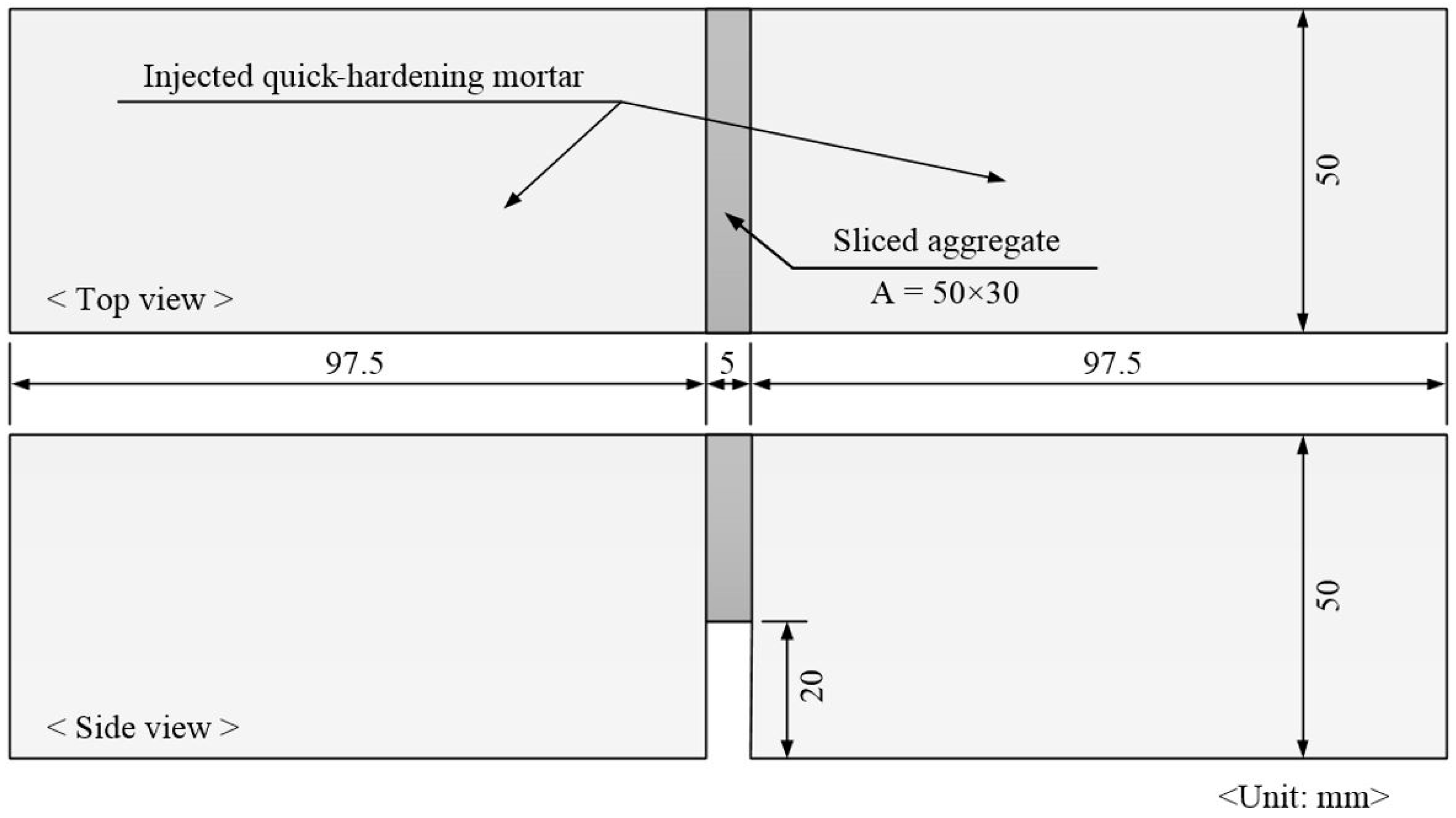 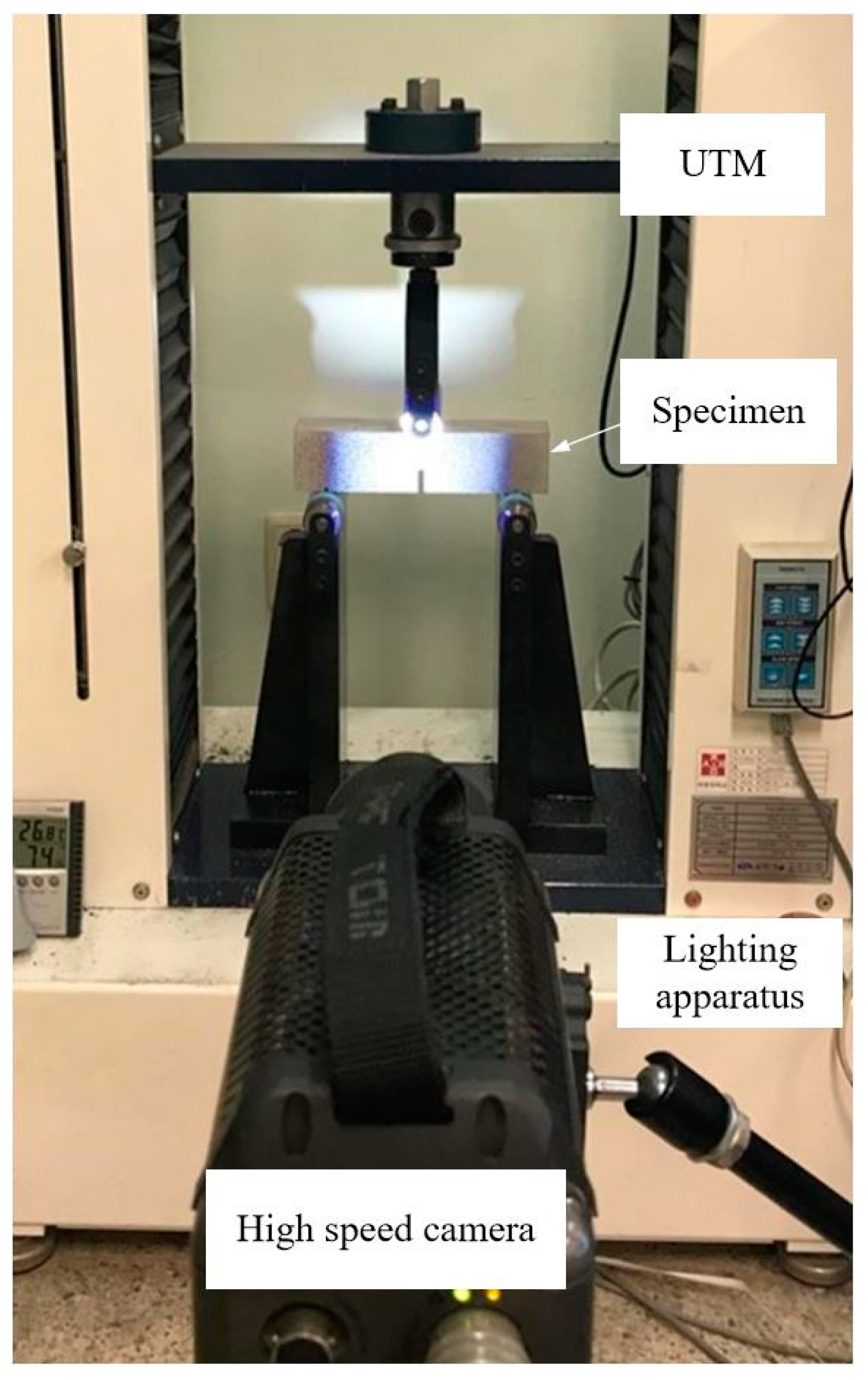 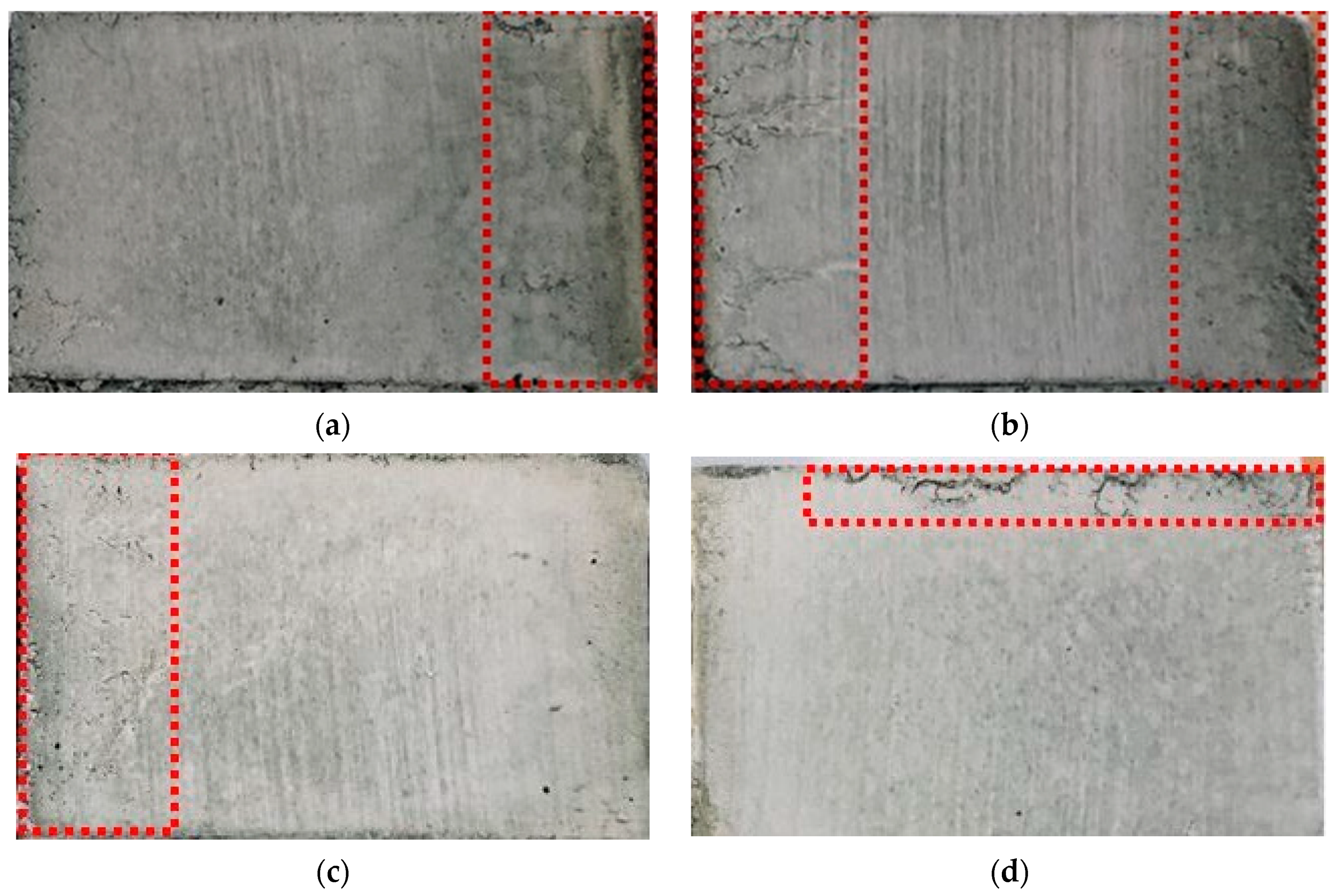 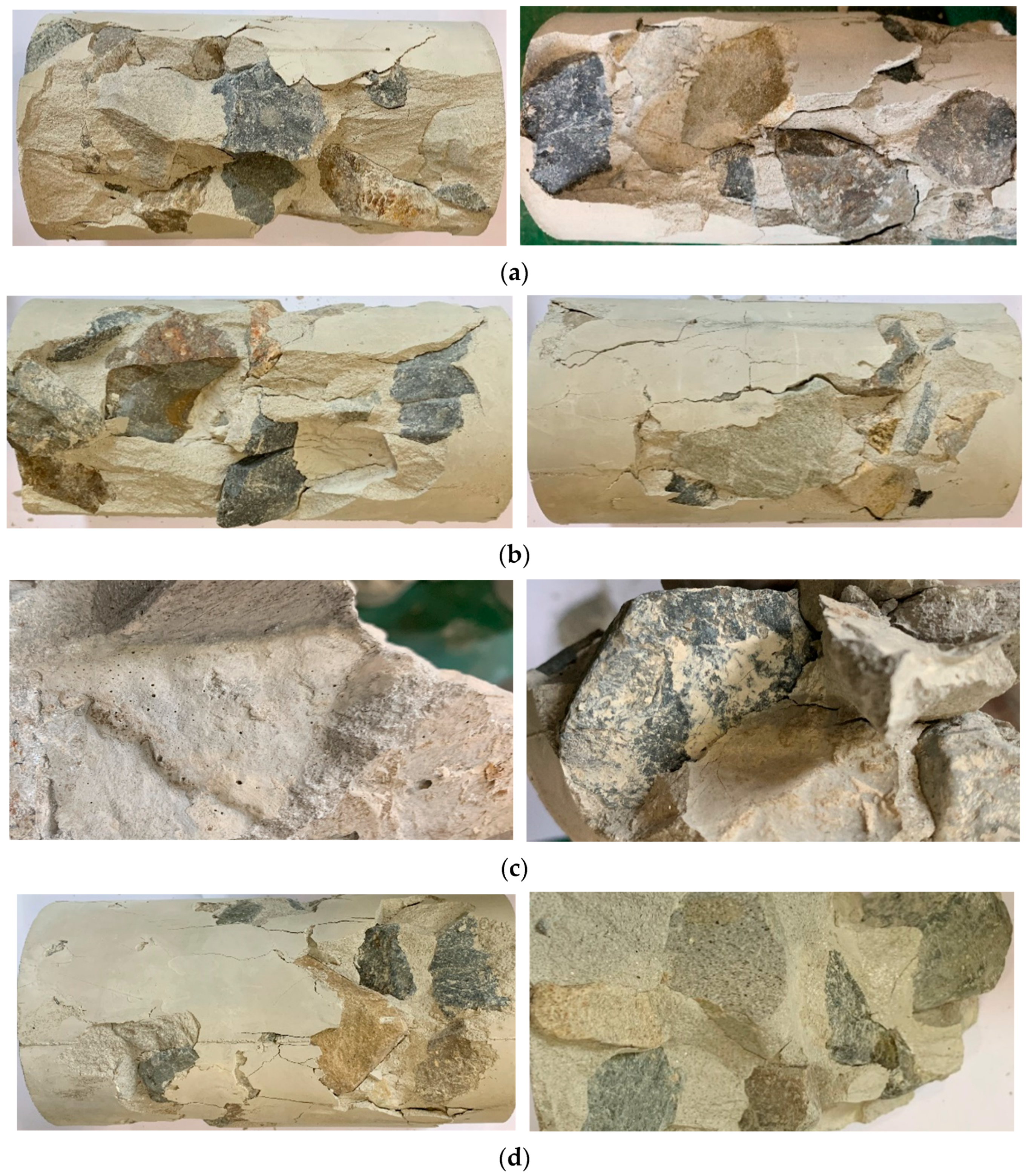 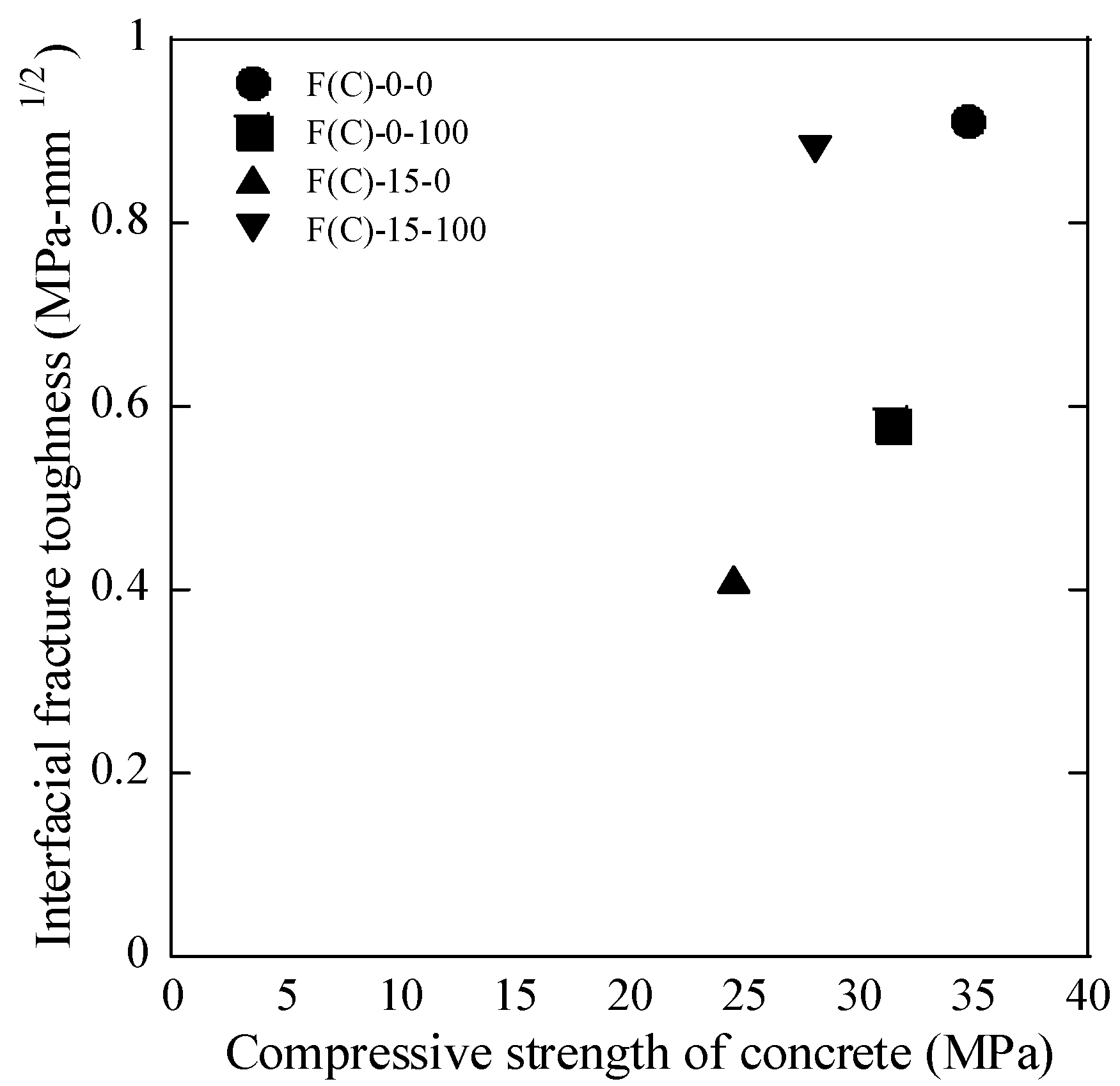