Shiga Toxin Therapeutics: Beyond Neutralization
Next Article in Special Issue

Viral M-dsRNAs encoding yeast killer toxins share similar genomic organization, but no overall sequence identity. The dsRNA full-length sequences of several known M-viruses either have yet to be completed, or they were shorter than estimated by agarose gel electrophoresis. High-throughput sequencing was used to analyze some M-dsRNAs previously sequenced by traditional techniques, and new dsRNAs from atypical killer strains of Saccharomyces cerevisiae and Torulaspora delbrueckii. All dsRNAs expected to be present in a given yeast strain were reliably detected and sequenced, and the previously-known sequences were confirmed. The few discrepancies between viral variants were mostly located around the central poly(A) region. A continuous sequence of the ScV-M2 genome was obtained for the first time. M1 virus was found for the first time in wine yeasts, coexisting with Mbarr-1 virus in T. delbrueckii. Extra 5′- and 3′-sequences were found in all M-genomes. The presence of repeated short sequences in the non-coding 3′-region of most M-genomes indicates that they have a common phylogenetic origin. High identity between amino acid sequences of killer toxins and some unclassified proteins of yeast, bacteria, and wine grapes suggests that killer viruses recruited some sequences from the genome of these organisms, or vice versa, during evolution. View Full-Text
Keywords: Saccharomyces cerevisiae; Torulaspora delbrueckii; killer; virus genome; dsRNA; sequencing; HTS; RNA recombination; phylogenetic origin Saccharomyces cerevisiae; Torulaspora delbrueckii; killer; virus genome; dsRNA; sequencing; HTS; RNA recombination; phylogenetic origin
►▼ Show Figures 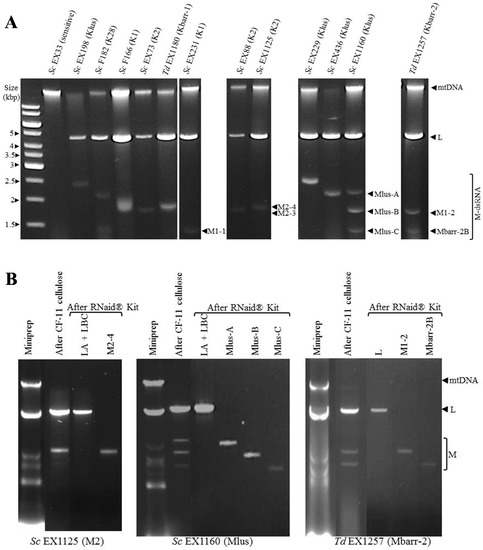