Using venom for predation often leads to the evolution of resistance in prey. Understanding individual variation in venom resistance is key to unlocking basic mechanisms by which antagonistic coevolution can sustain variation in traits under selection. For prey, the opposing challenges of predator avoidance and resource acquisition often lead to correlated levels of risk and reward, which in turn can favor suites of integrated morphological, physiological and behavioral traits. We investigate the relationship between risk-sensitive behaviors, physiological resistance to rattlesnake venom, and stress in a population of California ground squirrels. For the same individuals, we quantified foraging decisions in the presence of snake predators, fecal corticosterone metabolites (a measure of “stress”), and blood serum inhibition of venom enzymatic activity (a measure of venom resistance). Individual responses to snakes were repeatable for three measures of risk-sensitive behavior, indicating that some individuals were consistently risk-averse whereas others were risk tolerant. Venom resistance was lower in squirrels with higher glucocorticoid levels and poorer body condition. Whereas resistance failed to predict proximity to and interactions with snake predators, individuals with higher glucocorticoid levels and in lower body condition waited the longest to feed when near a snake. We compared alternative structural equation models to evaluate alternative hypotheses for the relationships among stress, venom resistance, and behavior. We found support for stress as a shared physiological correlate that independently lowers venom resistance and leads to squirrels that wait longer to feed in the presence of a snake, whereas we did not find evidence that resistance directly facilitates latency to forage. Our findings suggest that stress may help less-resistant squirrels avoid a deadly snakebite, but also reduces feeding opportunities. The combined lethal and non-lethal effects of stressors in predator–prey interactions simultaneously impact multiple key traits in this system, making environmental stress a potential contributor to geographic variation in trait expression of toxic predators and resistant prey. View Full-Text
Keywords: antipredator defense; boldness; integrated phenotype; trade-offs; Otospermophilis beecheyi; Crotalus o. oreganus antipredator defense; boldness; integrated phenotype; trade-offs; Otospermophilis beecheyi; Crotalus o. oreganus
►▼ Show Figures 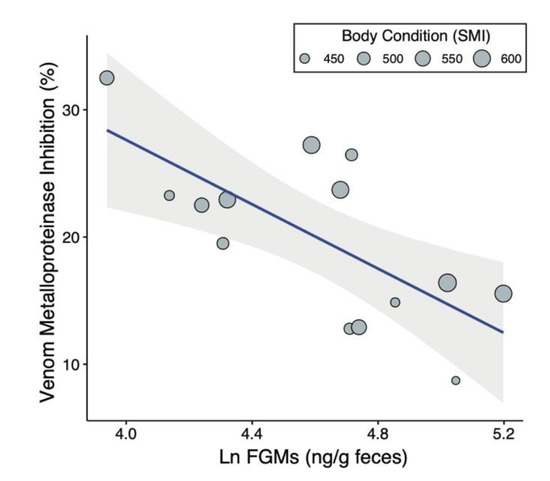