Pore-Forming Proteins from Cnidarians and Arachnids as Potential Biotechnological Tools

:
Inflammatory Bowel Disease (IBD) represents a collection of gastrointestinal disorders resulting from genetic and environmental factors. Microcystin-leucine arginine (MC-LR) is a toxin produced by cyanobacteria during algal blooms and demonstrates bioaccumulation in the intestinal tract following ingestion. Little is known about the impact of MC-LR ingestion in individuals with IBD. In this study, we sought to investigate MC-LR’s effects in a dextran sulfate sodium (DSS)-induced colitis model. Mice were separated into four groups: (a) water only (control), (b) DSS followed by water (DSS), (c) water followed by MC-LR (MC-LR), and (d) DSS followed by MC-LR (DSS + MC-LR). DSS resulted in weight loss, splenomegaly, and severe colitis marked by transmural acute inflammation, ulceration, shortened colon length, and bloody stools. DSS + MC-LR mice experienced prolonged weight loss and bloody stools, increased ulceration of colonic mucosa, and shorter colon length as compared with DSS mice. DSS + MC-LR also resulted in greater increases in pro-inflammatory transcripts within colonic tissue (TNF-α, IL-1β, CD40, MCP-1) and the pro-fibrotic marker, PAI-1, as compared to DSS-only ingestion. These findings demonstrate that MC-LR exposure not only prolongs, but also worsens the severity of pre-existing colitis, strengthening evidence of MC-LR as an under-recognized environmental toxin in vulnerable populations, such as those with IBD.
Keywords:
inflammatory bowel disease; dextran sulfate sodium; colitis; microcystin; colon
Key Contribution: This study is the first investigation assessing the effects of the Harmful Algal Bloom toxin, microcystin-LR in a model of pre-existing inflammatory bowel disease.

Inflammatory bowel disease (IBD) is a collection of disorders characterized by both acute and chronic inflammation of the gastrointestinal (GI) tract [1]. IBD has become a global health burden, with an estimated 1 million individuals in the USA and 2.5 million individuals in Europe being affected by IBD [2]. Total indirect and direct costs of IBD in the US were estimated to have been between $14.6 and $31.6 billion in 2014 [3] and a recent study found total costs of IBD patients in 2015 to be three times higher than non IBD patients [4]. In addition, IBD is rapidly growing in prevalence within newly industrialized countries around the world [2].
Two of the most common forms of IBD are Crohn’s disease (CD) and ulcerative colitis (UC), which share certain characteristics but also exhibit key differences. CD can affect any region of the GI tract and is characterized by discontinuous “skip lesions” while UC most commonly manifests within the distal GI tract, starting in the rectum and progressing proximally in a continuous manner along the distal colon [5]. Hallmarks of CD are transmural acute and chronic inflammation, non-caseating granulomas, strictures, and fistulas, while UC is characterized by mucosal and submucosal acute inflammation, crypt abscesses, ulcerations, depletion of goblet cells and mucin, bloody diarrhea, and weight loss [1]. These two conditions are frequently accompanied by other comorbidities and complications, making overall clinical presentations complex, difficult to manage, financially burdensome, and symptomatically debilitating for affected individuals.
IBD is a complex disease with a multifactorial etiology. There are genetic components that predispose individuals to develop IBD, as well as a dysregulation within the host immune system and GI microbial environment [6]. However, there is also an important role that the environment plays in IBD’s pathogenesis and disease severity. This is highlighted by its dominant prevalence in industrialized countries and its growing prevalence in newly developed countries [6]. Many of these environmental factors have been explored, including environmental sanitation and hygiene; behavioral factors, such as smoking, diet, stress management, and breastfeeding; and use of medications, such as antibiotics, non-steroidal anti-inflammatory drugs, and oral contraceptives [6]. Additional environmental factors include microorganism infections, such as those caused by Helicobacter pylori, Mycobacterium avium, Escherichia coli, Yersinia enterocolitica, Listeria monocytogenes, and Candida albicans [6]. The identification of these different triggers of IBD disease progression have allowed for the establishment of appropriate preventative and therapeutic measures, however, there is still an urgent need to continue investigating other potential offenders.
One growing global environmental concern that has not been studied for its effects in IBD populations is microcystin. Microcystins (MCs) are a collection of potent toxins produced by cyanobacteria, also known as blue-green algae [7]. Of these toxins, microcystin-LR (MC-LR) is one of the most commonly produced forms and is also one of the most toxic variants [8]. Harmful algal blooms (HABs) contaminate freshwater environments and have affected every region of the USA. Globally, more than 40% of lakes and reservoirs in Europe, Asia, and America have favorable conditions for HABs, with 25–75% of blooms being considered toxic [9]. In addition, these HABs are increasing exponentially in frequency and severity worldwide [10]. The acute and chronic effects of microcystin exposure in humans have been recently reviewed [11]. Notable events of MC-LR exposure and toxicity in humans have been documented around the world. One of the most notable events occurred in 1996, where 116 of 130 patients at a dialysis center experienced acute liver failure and death within one week of exposure to water sources contaminated with microcystin [12,13]. Previous studies have identified the gastrointestinal tract to be a potentially important target of MC-LR toxicity and have even shown the intestines to be the site of greatest MC-LR bioaccumulation [10,14,15,16]. While MC-LR has been shown to cause severe liver damage [15], found to be a potential human carcinogen [8], and documented to be fatal in humans in some complicated cases [12], there is a critical need to investigate MC-LR’s effects within the intestines, especially in more vulnerable settings, such as IBD.
In this current study, we aimed to address these pressing gaps in knowledge by utilizing the well-established dextran sulfate sodium (DSS) model of colitis in C57BL/6 mice [17]. This model has been developed to mimic characteristics of both CD and UC, and has been extensively validated by the use of several therapeutic agents used to treat human IBD [18]. The DSS model induces acute colitis and has been shown to sustain chronic levels of inflammation [19]. Because of MC-LR’s known bioaccumulation in the intestines, we hypothesized that MC-LR would prolong and/or worsen the severity of DSS-induced colitis.

Histopathological analysis of hematoxylin and eosin (H & E) stained colon sections revealed that DSS exposure led to segmental regions of ulceration, crypt abscesses, marked acute inflammatory cell infiltration, and early architectural distortion with gland branching and budding (i.e., early chronic changes), as compared with the normal colonic tissue of the control group (Figure 5A). Analysis of Periodic acid–Schiff (PAS) stained colon sections highlighted loss of goblet cells with mucin depletion, especially within and flanking the ulcer beds (Figure 5B).
H and E analysis of the colons in the DSS + MC-LR group revealed greater severity of the same histopathological findings observed in the DSS group. Measurement of the length of ulcerated mucosa to total colon length demonstrates a greater percentage of ulceration within the DSS + MC-LR group as compared to the DSS group (Figure 5C). The MC-LR and control groups did not show evidence of pathological changes.

2.5. Gene Expression in the Colon

All animal experimentation was conducted in accordance with the National Institutes of Health (NIH) Guide for the Care and Use of Laboratory Animals under protocols approved by The University of Toledo Institutional Animal Care and Use Committee (IACUC protocol #108663, approval date 9 February 2016). All mice were housed in a specific pathogen free facility, maintained at standard conditions of 23 ± 1 °C under a 12-h light cycle and were allowed to eat a normal chow diet ad libitum. Male C57BL/6 mice were purchased from The Jackson Laboratory at five weeks of age. The mice were immediately assigned randomly to one of four groups: (a) water only (control), (b) DSS followed by water (DSS), (c) water followed by MC-LR (MC-LR), and (d) DSS followed by MC-LR (DSS + MC-LR). The control water group consisted of 6 mice, the DSS group consisted of six mice, the MC-LR group consisted of 10 mice, and the DSS + MC-LR group consisted of 10 mice. All 32 mice were allowed to acclimatize to their new environment until eight weeks of age.

Remaining colonic tissue from these mice were cut longitudinally, wrapped around a rigid holder, placed in cassettes, and fixed in 10% neutral buffered formalin for 24 h. The cassettes were then transferred to 70% ethanol. This formalin fixed tissue was then processed and embedded in paraffin (FFPE). Five (5) micron tissue sections were placed on glass slides and stained with hematoxylin and eosin (H & E) and Periodic acid–Schiff (PAS). Images of histology slides were taken using an Olympus CKX53 microscope and Olympus CellSens software (Standard 1.15) (Center Valley, PA, USA).
Severity of colon ulceration was further quantified using the Olympus CellSens software by measuring total length of ulcerated colon and normalizing to the total length of colon to give percent of colonic mucosa with ulceration. 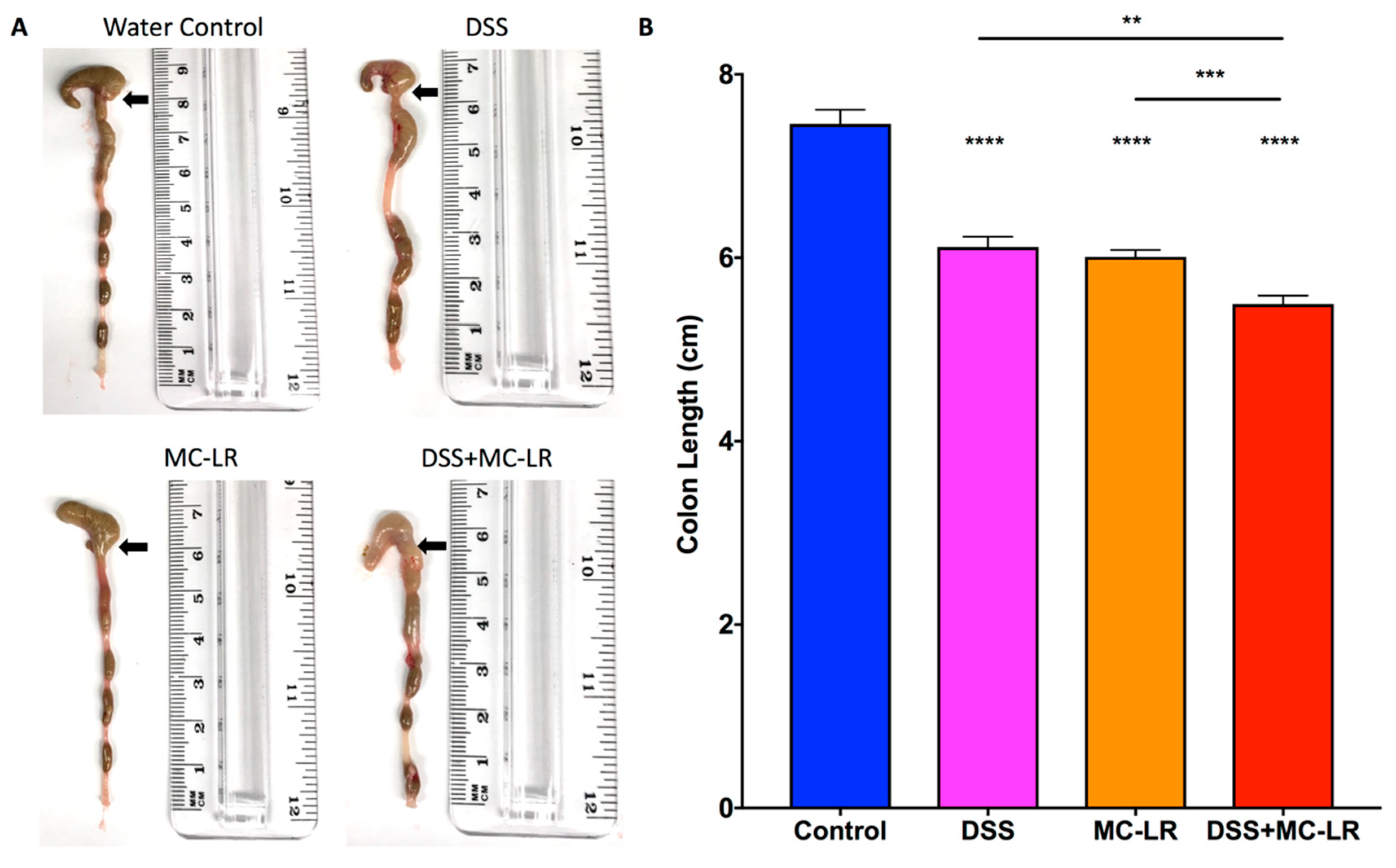 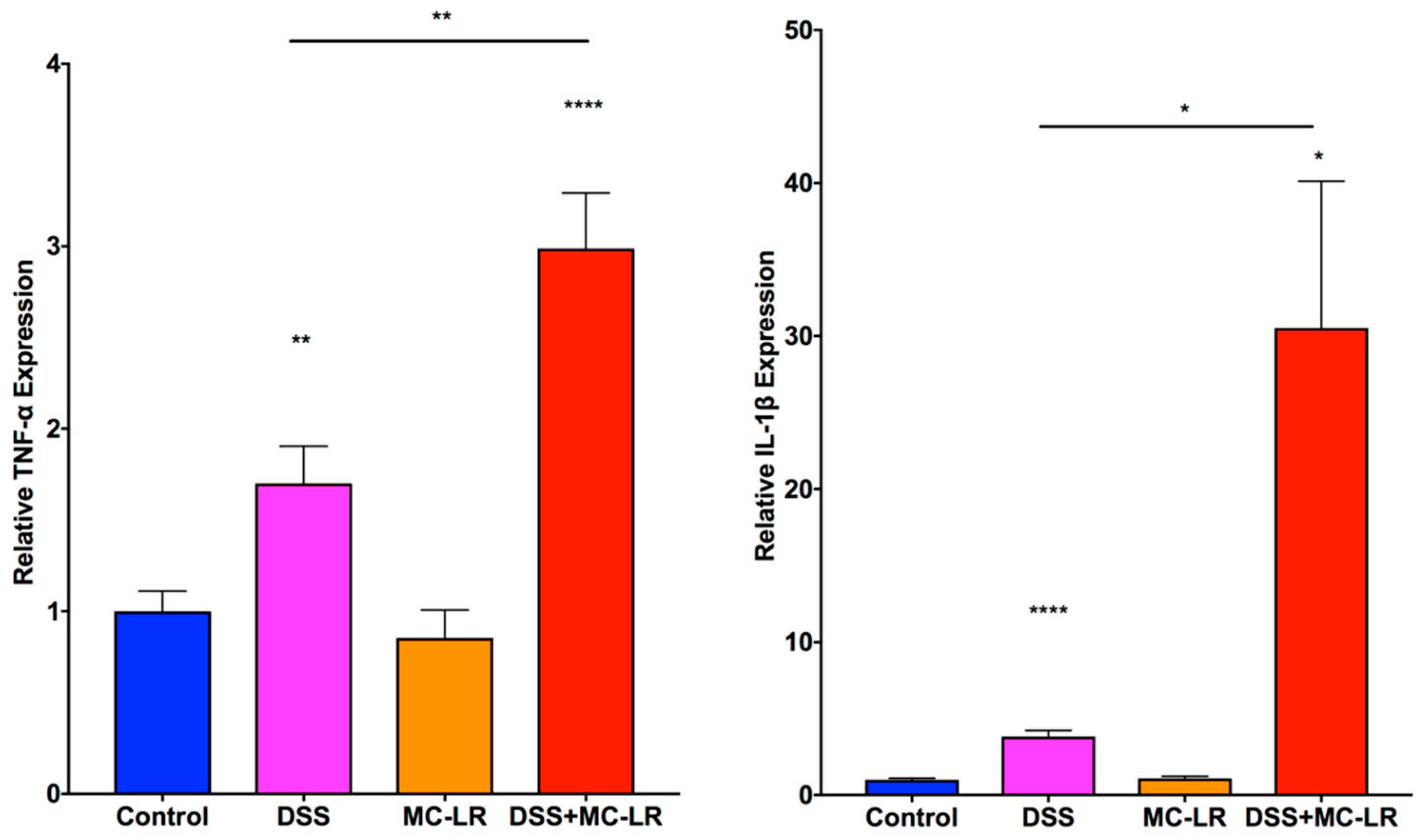