Towards Content Neutrality in Wiki Systems
Previous Article in Journal

:
The growing complexities of software and the demand for shorter time to market are two important challenges that face today’s IT industry. These challenges demand the increase of both productivity and quality of software. Model-based testing is a promising technique for meeting these challenges. Traceability modeling is a key issue and challenge in model-based testing. Relationships between the different models will help to navigate from one model to another, and trace back to the respective requirements and the design model when the test fails. In this paper, we present an approach for bridging the gaps between the different models in model-based testing. We propose relation definition markup language (RDML) for defining the relationships between models.
Keywords:
model-based testing (MBT); requirements; design model; test model; traceability

Testing is an essential activity in software engineering. In the simplest terms, it amounts to observing the execution of a software system to validate whether it behaves as intended and to identify potential malfunctions [1]. Software testing constitutes about 40% to 60% of the development costs [2]. A major part of the testing effort is for specifying and running the tests, and these are usually performed manually. Model-based testing is a promising technology to reduce the testing effort and increase the test efficiency.
Automation of software development and software testing on the basis of executable models and simulation promises significant reductions in fault-removal cost and development time. Utting et al. [3] define model-based testing as a variant of testing that relies on explicit behavior models that encode the intended behavior of a system, and possibly the behavior of its environment. According to Bertolino [1], the major goal of model-based testing (MBT) is automatic generation of test artifacts from models. MBT offers considerable promise in reducing the cost of test generation, increasing the effectiveness of the tests, and shortening the testing effort [4].
The software life cycle starts with requirements capturing by the business analyst; these requirements are used by the design analyst for designing the software architecture, and later both of these are used for developing test models. Requirements specification, design models and test models can be considered the integral parts of model-based testing. Defining relationships between models could provide effective verification and analysis of the consistencies and dependencies between models. Study has to be focused to bridge the gap by defining strong relationships between these models.
In this paper, we present an approach for defining relationships between the major constituents of model-based testing. We discuss how these models can be defined and how to define the relationships between these models, thus filling the gap between different phases of the software life cycle. This paper is organized into an overview of the need for traceability between requirements model, design model, and test model, related work, and the new approach.

2. The Need for Traceability in Model-Based Testing

The Institute of Electrical and Electronics Engineers (IEEE) defines traceability as the degree to which relationships can be established between two or more products of the development process, especially products having a predecessor–successor or master-subordinate relationship to one another [5]. Typically, traceability relations denote satisfiability, dependency, evolution, and rationalization relations between software artifacts [6]. Gotel and Finkelstein in [7] define traceability as the ability to describe and follow the life of a requirement in both a forwards and backwards direction. Murray et al. refer to traceability as the ability to identify requirements at different levels of abstraction and to show that they have been implemented and tested [8].
The above definitions do not cover all aspects of traceability, and most of them focus on requirements traceability. Since design models and test models also play a major role in model-based testing, there is a need for defining the design model and test model relationship as well. The automation of bidirectional traceability between requirements and test cases is a key aspect of MBT [9]. Bidirectional traceability is the ability to trace links between two parts of the software development process with respect to each other [9]. Dalal et al. [4] suggest that defects of a model can be minimized by ensuring the traceability from requirements to the part of models.
Traceability is widely used in the software development life cycle and is an active research area in software engineering [10]. Since tests are derived from models, the correctness of model and the consistency of requirements are important. Therefore, there is a need to understand the following:
Traceability between these models will help to understand the above questions. Traceability in model-based testing helps to:

Drawing upon the key motivation factors identified in Section 2 and Section 3, in this section we describe the proposed approaches for bridging the gap between the requirements model, design model, and the test model. Figure 1 provides an overview of the relationship between the different models. 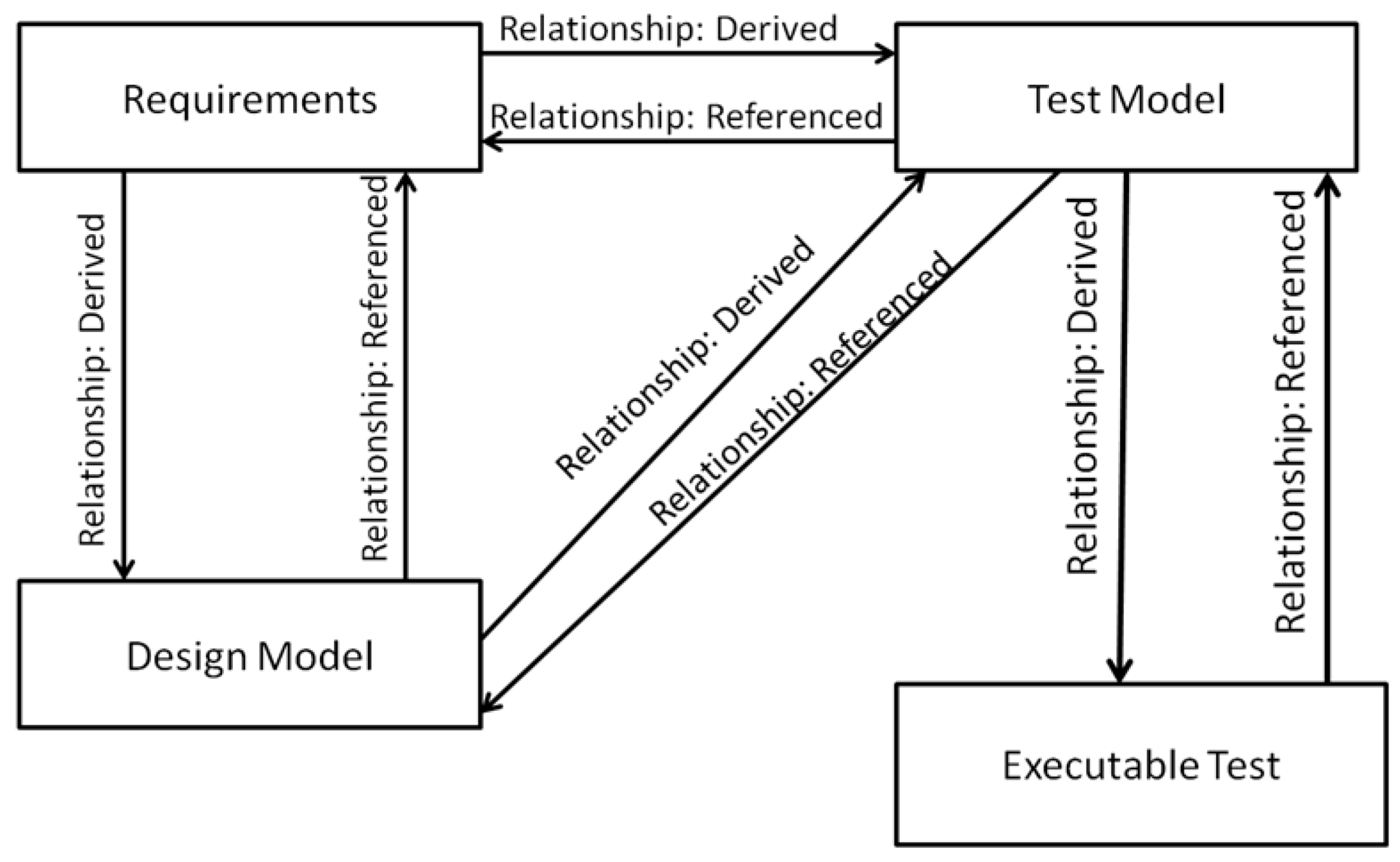 Our approach starts from analyzing the informal requirements formulated in any natural language. Natural language requirements will be formulated and structured into different use case scenarios based on predefined templates. Usage scenarios will be used for creating design models. Design models will be developed using appropriate UML diagrams. Each element in the use case scenario will be connected to the corresponding design model items. From the use case model and design model, the test model will be created. UML diagrams will be used for creating the test models. Executable tests will be generated from the test model. Relationships between use case model (requirements model), corresponding design model, test model and executable tests will be defined using our approach. The main focus of this paper will be confined only in bridging the gap between these models by providing efficient traceability; test generation from the test model is not in the scope of this paper. Therefore, the approach will be completed by defining relationships between these models.

Relationships between two models can be classified as “derived” and “referenced.”

Our approach starts with formulating the requirements, a scenario-based requirements elicitation. A major advantage of scenarios is that they allow for an effective exploration of users’ problems and goals [17]. Scenarios encourage designers to envision outcomes before attempting to specify outcomes, thereby helping to make requirements more proactive in system development [18]. Our scenario-based requirement elicitation comprises the following terminologies (see Table 1):
Table 1. Scenario based requirements—terminology.
Typically, a business analyst will identify different scenarios from the informal requirements specification and is formally organized, so that the design analyst can derive the design models easily. The main tasks during this phase are identifying the scenarios, the actors, and the activities involved in the scenario. A formal scenario tree can be considered for organizing the scenario (see Figure 4). The business analyst identifies different usage scenarios defined in the informal requirements and each usage scenario is further analyzed to find the different activities and actors. A scenario can contain any number of actors and actions. Each action is further analyzed to find the actors involved in this action. In the figure given below, scenarios are a collection of scenarios, which in turn is a collection of different actors and actions. 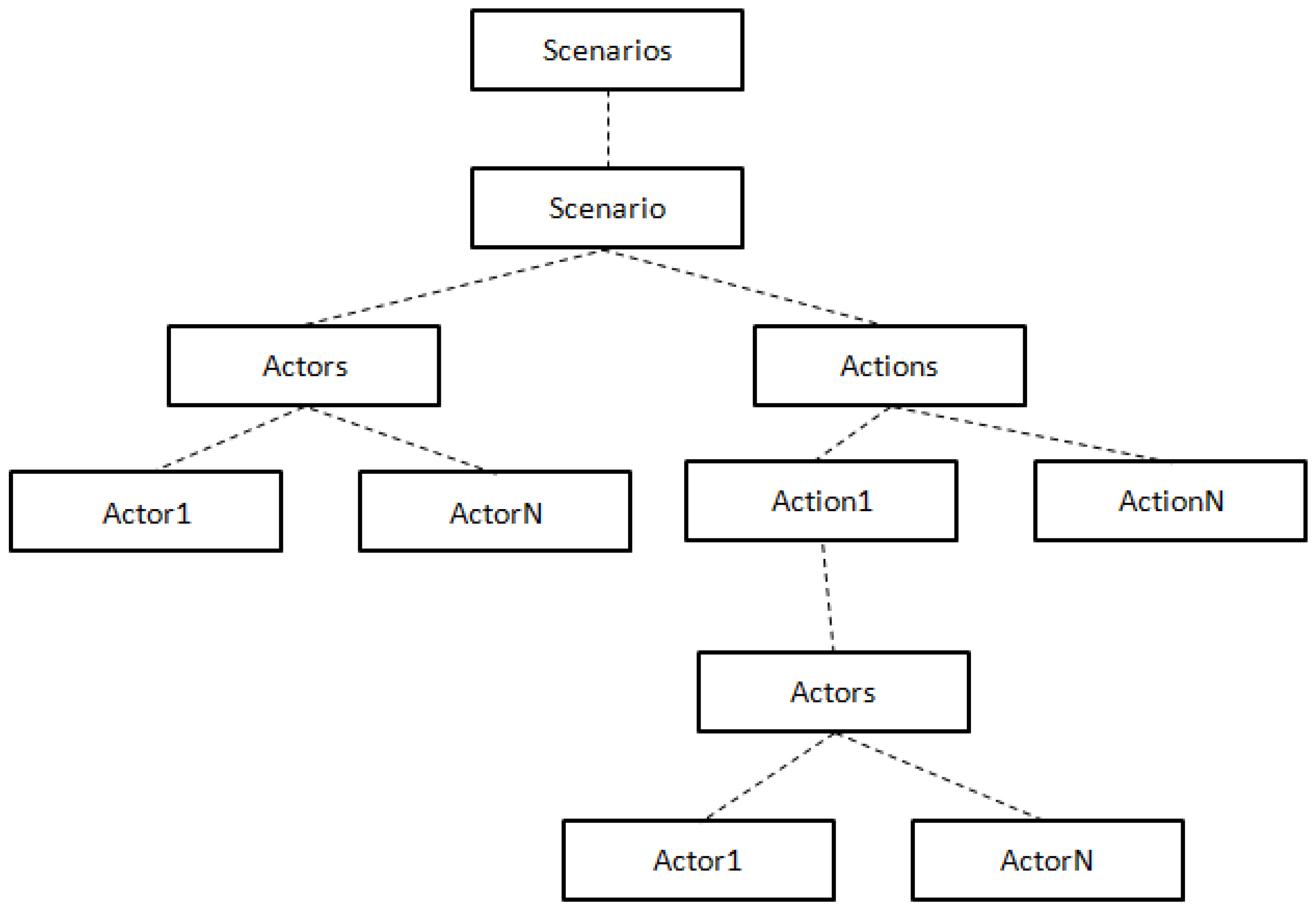 A scenario will have a unique id (scenario id) and source that points to a document where the requirement has been specified. Actor and action will also have a unique id. Actor will contain the necessary attributes and the action will contain the details of the action.
Our design model is derived from the structured requirements model defined above. Here, the design analyst refines the requirements model by finding, analyzing, and defining the actors and actions in different UML diagrams. From actors, appropriate classes are defined. Similarly, the actions are also grouped as functions into suitable classes and are described in UML activity diagrams. The main tasks involved in this phase are:

4.3. Defining the Relationship between Requirements Model and Design Model

4.5. Defining the Relationship of Test Models and Executable Tests with Other Models

5. Examples of RDML and Discussion 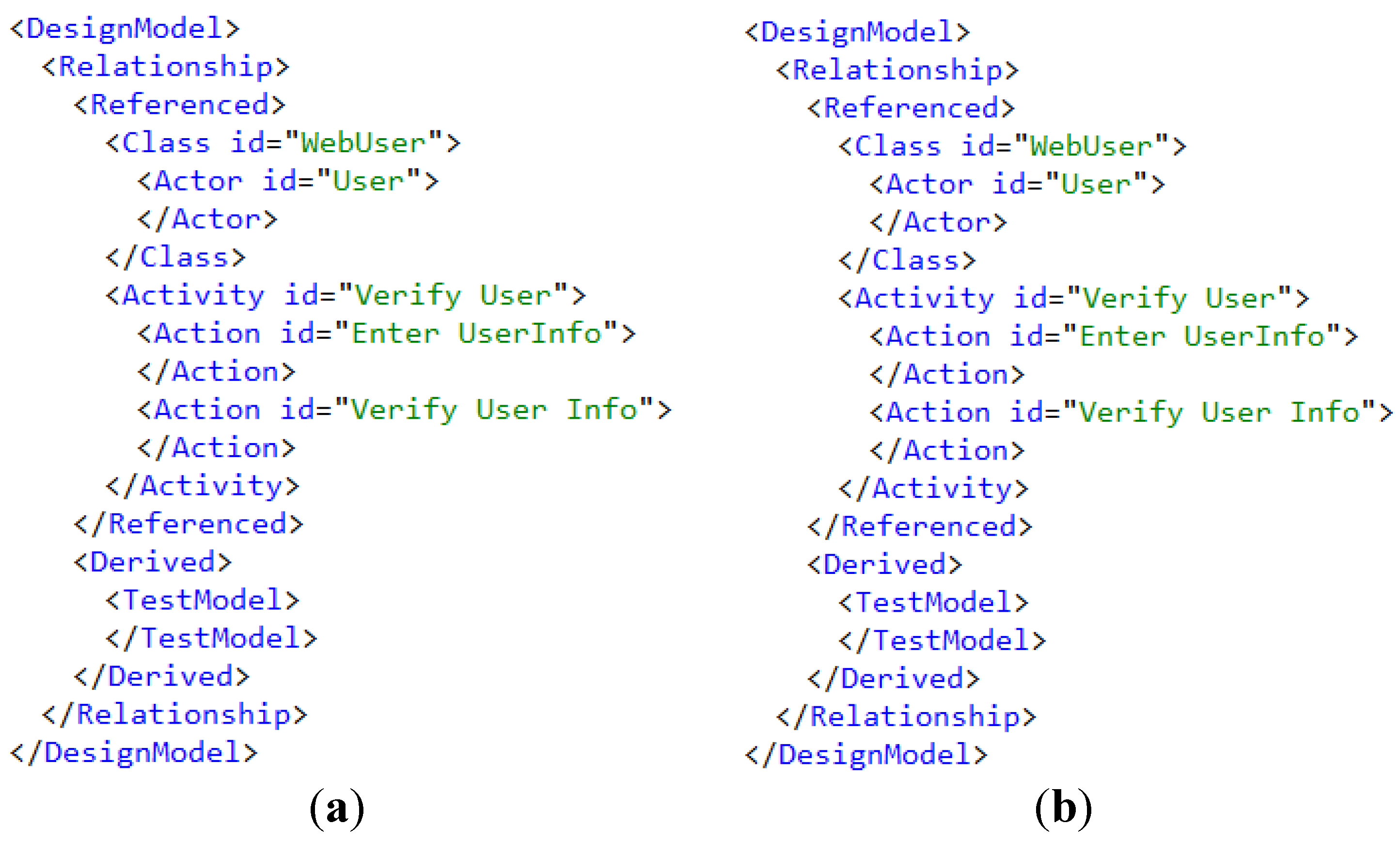