With the rapid development and maturity of Internet technologies, many online social platforms have gradually become the primary medium for people to obtain information and communicate with each other. Emerging social platforms, such as Weibo and WeChat, allow users to interact with information quickly and easily.
Weibo is not only a medium for people to communicate with each other, but also a way to express personal emotions. However, while expressing opinions, spreading thoughts, and expressing personal emotions, users also generate a large amount of information with personal subjective emotional characteristics. This information contains emotional characteristics of different tendencies. These emotional characteristics reflect the user’s hobbies and interests. At the same time, it may also have a huge impact on the spread of Internet public opinion. Therefore, the sentiment analysis of Weibo text can understand the use’s preferences and users’ views on some hot events in the real society and make trend predictions.
Personality is a unique characteristic of an individual and profoundly affects the user’s psychological state and social behavior. Personality research mainly focuses on the correlation between various personalities and the relationships between personalities and performance, creativity, and others, most of which are analyzed by self-reporting and regression algorithms. With developments in psychological research, people with the same personality have been found to exhibit similarities in writing and expressions. This feature is the basis for introducing personality into sentiment analysis. At present, personality-based sentiment analysis is still in its exploratory stages. Sentiment analysis does not differentiate the various ways of expressing emotions based on user individuality, nor does it consider the combination of sentiment analysis and personality analysis. In order to address this problem, this paper proposes a personality-based Weibo sentiment analysis model, which introduces personality judgment rules to study the influence of personality on sentiment analysis.

Ensemble Learning is widely used for classification and regression tasks. Its principal concept is simple: different methods are used to change the distribution of the original training samples to build multiple different classifiers, which are then combined linearly to get a more robust classifier. The two main types of integrated learning are boosting and bagging.
Bagging is a popular integration approach that uses a bootstrapping algorithm to get multiple copies of the training set, which are then used to train different models. Voting schemes are then employed to incorporate projection and forecasting. Because the training sets are slightly different from each other, each model trained for these training sets would have different weights and focus, thus obtaining different generalization errors. By combining the models, the overall generalization error is expected to decrease to a certain extent. Figure 1 shows the flowchart of the bagging algorithm.

In the field of psychology, some personality models have been proposed, such as the Big Five model and the MBTI (Myers–Briggs Type Indicator) model [42]. The Big Five model is a more authoritative personality model [38], which has been widely used in psychology and artificial intelligence [43]. The Big Five model characterizes personality based on five aspects: openness, conscientiousness, extroversion, agreeableness, and neuroticism. People with high openness are imaginative, creative, and curious. Conscientiousness reflects the degree of self-discipline and adequate preparedness for opportunities. Highly conscientious people are keen on work and eager for achievement. Extraverted people like to associate with others, while introverts prefer to be alone. Agreeable people are generous and trustworthy and are more inclined to help others. Nervousness reflects the degree of instability in human emotions.

In-text sentiment analysis, the order relationship of words is crucial. Mikolov et al. [44] proposed a language model called the Recurrent Neural Network (RNN), which has been recognized as particularly suitable for processing text sequence data. However, when the interval between the related information of the text and the current position to be predicted increases, the number of backward propagation layers of the time-based direction propagation algorithm also grows. This would result in loss of historical information and gradient attenuation or explosion during training [45].
LSTM can be viewed as an improvement to the traditional RNN language model, which calculates the model error using a textual statement as an input sequence. The smaller the error, the higher the confidence in the text expression. However, as the text sequence information gets longer, the LSTM model becomes more effective in overcoming the attenuation problem of the sequence information.

4. Micro-Blog Sentiment Analysis Method Based on Personality and Bagging Algorithm

The training data in this paper is from the literature [46], including the text published by Sina micro-blog users from 21 October 2009, to 15 December 2014. The dataset contains 10,474 texts, and each text is labeled with emotional polarity. Among them, there are 7562 positive and 2912 negative.
Test dataset 1 used the Chinese Weibo sentiment analysis evaluation data provided by the 2012 CCF Natural Language Processing and Chinese Computing Conference, which took 1100 texts, 600 positive texts, and 500 negative texts. The test dataset 2 consisted of a text crawled on Weibo using a crawler, with a total of 1500 pieces, 750 pieces each being positive and negative.

This experiment was mainly used to verify the classification precision of each basic sentiment classifier, including five personality basic emotion classifiers and a general basic emotion classifier. The dataset contains 10,474 texts, comprising 3151 high conscientiousness datasets (HC), 3188 high agreeableness datasets (HA), 3204 low agreeableness datasets (LA), 5585 high extroversion datasets (HE), and 3154 low extroversion dataset (LE). For comparison purposes, 3600 data points were randomly extracted from the universal set to form the dataset (ALLpart) that has an equal number of samples for each category. The experimental results are shown in Table 3.
As shown in Table 3, the F1 values of the HA classifier and HC classifier in the five personality basic emotion classifiers are higher than the ALL classifier. This indicates that the targeted sentiment analysis is effective on the different personality sets.
HC has the highest accuracy among the five sentiment classifiers. However, the overall accuracy is not particularly high, which could be the result of having a small dataset. Another possible explanation could be that, since the personality set is divided according to user personality, some errors may exist in classifying the user’s personality, which could decrease the accuracy of the trained sentiment classifier.

Experiments were used to verify the feasibility of applying the bagging algorithm. In the direct summation method, the weight of each classifier is kept equal (i.e.,). In the weighted sum method, the weight of each personality set is determined using cross-validation. The main criterion is to make precision as high as possible. In order to limit the computational workload, we restricted the number of experiments to 30 and picked the set with the highest precision as the approximate optimum. The optimal weights obtained for each personality set are: . q1, q2,..., q6 are the weight parameters of ALL, HC, HA, HE, LA, and LE. For comparison purposes, Table 4 lists some of the other weight settings.
The weight is usually proportional to the precision of the classifier on the training set; the higher the precision, the greater the weight. As shown in Table 3, the precision of the HC personality set is the highest, which consequently resulted in its weight being then largest. This is consistent with the results obtained in Table 4.
The experimental results of the two integration methods are shown in Table 5. The weighted sum method has a higher F score. The summation method assumes that all classifiers have equal weights. However, in practical applications, different classifiers should have varying weights given their different degrees of importance. Therefore, the weighted sum method is recommended as the final integration method.

The precision, recall, and F1 values are used as evaluation indicators in comparing the proposed PBAL approach with other benchmark techniques:

(1)
SVM: The basic model of a Support Vector Machine (SVM) is to find the best-separated hyperplane in the feature space to maximize the positive and negative sample spacing on the training set. SVM is a supervised learning algorithm used to solve the two-class problem. It can also be used to solve nonlinear problems after the introduction of the kernel method.
(2)
LSTM: Proposed by Hochreiter and Schmidhuber (1997), LSTM is a special type of RNN that helps in learning long-term dependency information.
(3)
CNN-rand: The CNN-rand was proposed by Kim in 2014 [47] where all the words are randomly initialized and then modified during training.
(4)
CNN-static: presented also by Kim in 2014, the CNN static includes a pre-training vector model from word2vec. All words, including randomly initialized unknown words, are kept static, and only the other parameters are learned in the model.
(5)
CNN-non-static: Similar to CNN-static, the CNN–non-static includes a fine-tuned vector pre-trained for each task.
(6)
PBAL: See Table 6 for experimental parameter settings.

The authors contributed equally to the paper and author names are in alphabetical order. The authors thank the editor, and the anonymous reviewers for their valuable suggestions that have significantly improved this study.Special thanks to the professional English editing service from EditX, and Thanks for Huang Xianke’s support and help. 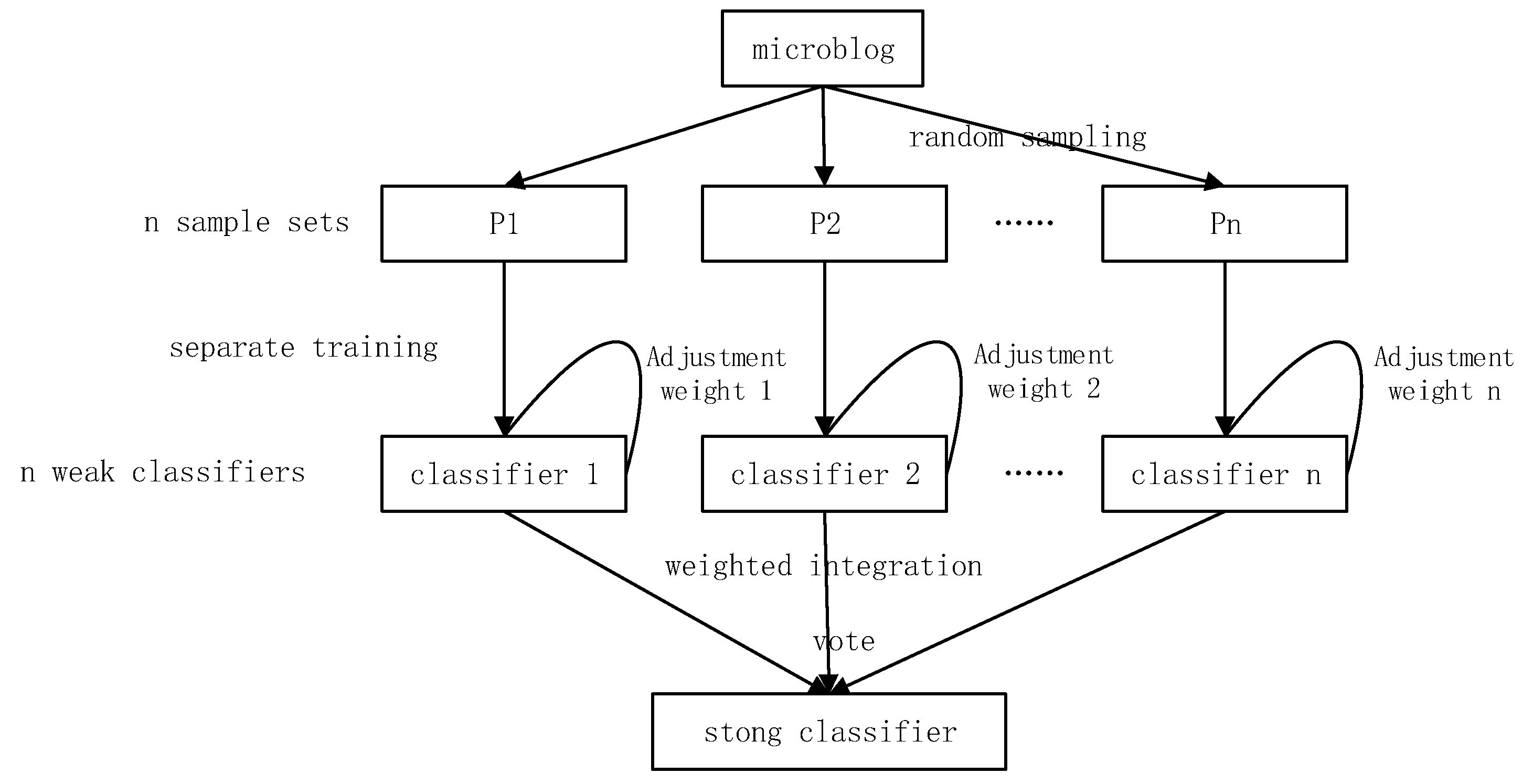 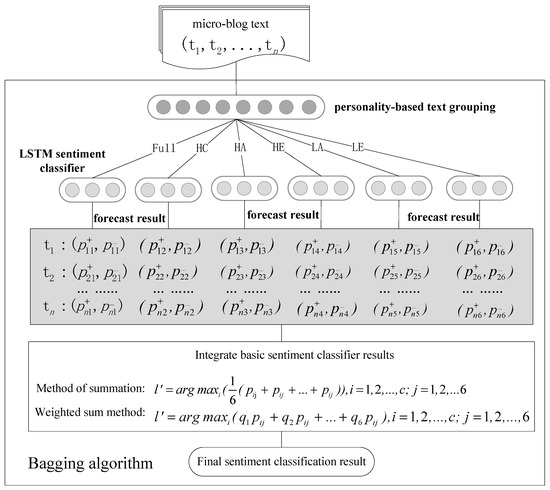