The small interfering RNA (siRNA) is suggested to offer a novel means of treating atopic dermatitis (AD) because it allows the specific silencing of genes related to AD pathogenesis. In our previous study, we found that siRNA targeted against RelA, an important nuclear factor-kappa B (NF-κB) subdomain, with functional peptides, showed therapeutic effects in a mouse model of AD. In the present study, to develop a topical skin application against AD, we prepared a hydrogel containing anti-RelA siRNA and functional peptides and determined the intradermal permeation and the anti-AD effects in an AD mouse model. We selected the silk protein, sericin (SC), which is a versatile biocompatible biomaterial to prepare hydrogel as an aqueous gel base. We found that the siRNA was more widely delivered to the site of application in AD-induced ear skin of mice after topical application via the hydrogel containing functional peptides than via the preparation without functional peptides. In addition, the ear thickness and clinical skin severity of the AD-induced mice treated with hydrogel containing anti-RelA siRNA with functional peptides improved more than that of mice treated with the preparation formulated with negative siRNA. View Full-Text
Keywords: atopic dermatitis; skin topical application; siRNAs; NF-κB; sericin; hydrogel atopic dermatitis; skin topical application; siRNAs; NF-κB; sericin; hydrogel
►▼ Show Figures 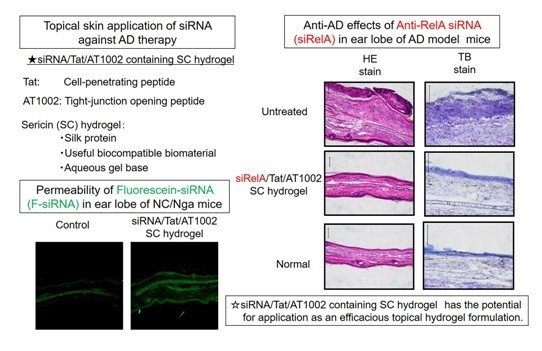