The Flux of Select NSAIDs through Silicone Membranes from Mineral Oil

Microbicides are an active area of research for HIV prevention, being developed as a woman-initiated method of prevention during unprotected coitus. Along with safety and efficacy, assessing and improving compliance is a major area of research in microbicide development. We have produced microbicide prototypes in the form of semisoft vaginal suppositories prepared from carrageenan and conducted both qualitative and quantitative studies using these prototypes to determine the physical properties that drive acceptability and possibly adherence. In order to ensure that the suppositories function as effective drug delivery vehicles, we have conducted in vitro dissolution studies in water, vaginal simulant fluid (VSF) and semen simulant fluid (SSF) with suppositories loaded with the antiretroviral drug, tenofovir (TFV). TFV was released via diffusion and matrix erosion in water or by diffusion out of the matrix in VSF and SSF. Diffusion studies were conducted in two different volumes of VSF and SSF. The volume of VSF/SSF into which TFV diffused and the size of the suppositories determined the rate of diffusion from the suppositories. About 45%–50% of the encapsulated TFV diffused out of the suppositories within the first two hours, irrespective of suppository size, diffusion medium (VSF/SSF) and the volume of medium. Prior work indicates that a short waiting period between insertion and coitus is highly desired by women; present data suggest our microbicide prototypes have rapid initial release followed by a slow release curve over the first 24 h. View Full-Text
Keywords: microbicide; tenofovir; dissolution; semisoft suppository; carrageenan; HIV microbicide; tenofovir; dissolution; semisoft suppository; carrageenan; HIV
►▼ Show Figures 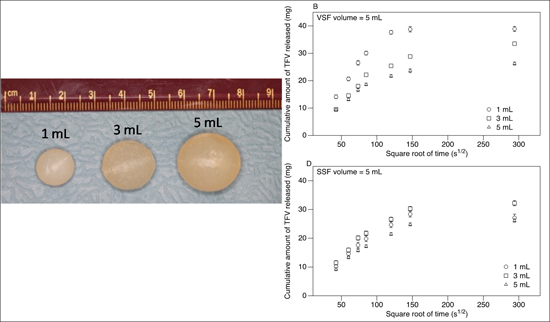