Bioequivalence of Oral Drug Products in the Healthy and Special Populations: Assessment and Prediction Using a Newly Developed In Vitro System “BE Checker”
Next Article in Special Issue

Polyphenols Epigallocatechin Gallate and Resveratrol, and Polyphenol-Functionalized Nanoparticles Prevent Enterovirus Infection through Clustering and Stabilization of the Viruses
Previous Article in Journal

Is the Conjunctiva a Potential Target for Advanced Therapy Medicinal Products?

Neonatal sepsis is a leading cause of death among newborns and infants, especially in the developing world. The problem is compounded by the delays in pinpointing the causative agent of the infection. This is reflected in increasing mortality associated with these cases and the spread of multi-drug-resistant bacteria. In this work, we deployed bioinformatics and proteomics analyses to determine a promising target that could be used for the identification of a major neonatal sepsis causative agent, Klebsiella pneumoniae. A 19 amino acid peptide from a hypothetical outer membrane was found to be very specific to the species, well conserved among its strains, surface exposed, and expressed in conditions simulating infection. Antibodies against the selected peptide were conjugated to gold nanoparticles and incorporated into an immunochromatographic strip. The developed strip was able to detect as low as 105 CFU/mL of K. pneumoniae. Regarding specificity, it showed negative results with both Escherichia coli and Enterobacter cloacae. More importantly, in a pilot study using neonatal sepsis cases blood specimens, the developed strip selectively gave positive results within 20 min with those infected with K. pneumoniae without prior sample processing. However, it gave negative results in cases infected with other bacterial species. View Full-Text
Keywords: K. pneumoniae; neonatal sepsis; immunochromatographic strip; diagnosis; rapid; gold nanoparticles K. pneumoniae; neonatal sepsis; immunochromatographic strip; diagnosis; rapid; gold nanoparticles
►▼ Show Figures 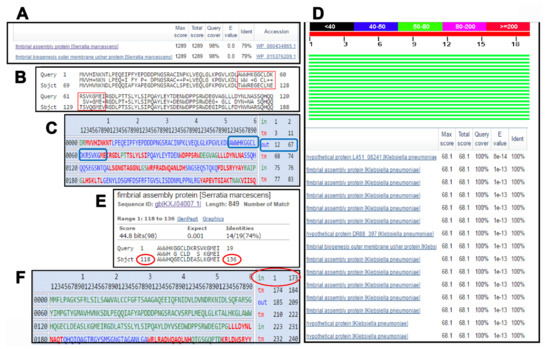