Effects of Magnesium, Calcium, and Aluminum Chelation on Fluoroquinolone Absorption Rate and Bioavailability: A Computational Study

Fluoroquinolones (FQs) are a widespread class of broad-spectrum antibiotics prescribed as a first line of defense, and, in some cases, as the only treatment against bacterial infection. However, when administered orally, reduced absorption and bioavailability can occur due to chelation in the gastrointestinal tract (GIT) with multivalent metal cations acquired from diet, coadministered compounds (sucralfate, didanosine), or drug formulation. Predicting the extent to which this interaction reduces in vivo antibiotic absorption and systemic exposure remains desirable yet challenging. In this study, we focus on quinolone interactions with magnesium, calcium and aluminum as found in dietary supplements, antacids (Maalox) orally administered therapies (sucralfate, didanosine). The effect of FQ–metal complexation on absorption rate was investigated through a combined molecular and pharmacokinetic (PK) modeling study. Quantum mechanical calculations elucidated FQ–metal binding energies, which were leveraged to predict the magnitude of reduced bioavailability via a quantitative structure–property relationship (QSPR). This work will help inform clinical FQ formulation design, alert to possible dietary effects, and shed light on drug–drug interactions resulting from coadministration at an earlier stage in the drug development pipeline.
Keywords: fluoroquinolones; antibiotics; antacids; multivalent metals; pharmacokinetics; bioavailability; oral absorption; molecular modeling fluoroquinolones; antibiotics; antacids; multivalent metals; pharmacokinetics; bioavailability; oral absorption; molecular modeling

The oral absorption rate constant, ka, describes the rate at which a drug moves from the gastrointestinal tract to the plasma and systemic circulation. Calculation of ka is achieved by approximating the elimination phase of a one-compartment model and the time to maximum plasma concentration (Tmax). Assuming a first-order absorption process, Tmax is related to ka and the elimination rate constant, ke, by Equation (1) [43]:
The elimination rate constant can be calculated from the concentration-versus-time curve, where the post-absorption phase of the log scale plot has slope 2ke/2.303. In the case of a one-compartment model, ke may be derived from the terminal slope and used for calculation of the half-life period (t1/2). For all compounds, the ke was ultimately calculated from t1/2 values using Equation (2): where Vd is the drug’s volume of distribution and CL is clearance. If Tmax and t1/2 were provided as tabulated pharmacokinetic parameters within a literature source, these values were used as given for the ka calculation, first using t1/2 and Equation (2) giving ke, then solving for ka given Tmax and Equation (1). While Tmax was consistently available in primary literature sources, t1/2 was not always available. In such cases, the pertinent concentration-versus-time curve was digitized and t1/2 and ka were extracted using the slope of the post-absorption phase in the procedure described above, followed by use of Equation (1) yielding ka. The complete set of data tabulating dose, administration timing, Cmax, Tmax, t1/2, AUC, ke, and ka may be found in the Table S1 (Supplementary Materials).

SMILES strings for all FQ compounds were used to calculate physicochemical property descriptors. SMILES strings ware taken from the PubChem public database [44]. PubChem compound identification numbers and SMILES strings can be found in the Supplementary Materials (Table S2). Topological polar surface area (TPSA) was calculated using the surface contribution-based method of Ertl et al. [45] and assuming nitrogen, oxygen, sulfur, and phosphorus atoms as polar. The calculated logarithm of the octanol/water partition coefficient (logP) was predicted using the Wildman–Crippen model [46]. Tabulated physicochemical properties can be found in Table 1. All descriptors were calculated as implemented in the Mordred cheminformatics Python package [47,48].

Amphoteric FQs can exist in several protonation states in aqueous solvent [49,50]. At neutral pH, both the carboxylic acid and piperazine nitrogen atom are predominantly ionized, forming a zwitterionic species [51]. To reflect the acidic environments of the stomach and gastrointestinal tract (GIT), the cationic species was used throughout all molecular modeling computations. FQ structures were modeled under acidic conditions assuming unionized 3-carboxyl group and protonated terminal N-piperazinyl group in the R7 position. It was assumed that gastric pH remains acidic even after antacid administration [52]. Magnesium, calcium, and aluminum ions were constructed as the octahedral hexahydrate species. Bidentate FQ chelation (3-carboxyl and 4-keto oxygen atoms bound to the metal center) was considered for all computed complexes as observed experimentally from spectroscopy and crystal structures [53,54]. FQ–metal complexes were built as the 1:1 stoichiometry chelates. Under higher metal concentrations or acidic conditions, a 1:1 ratio of FQ to metal is the most observed species [55]. Quinoline–metal chelates can exhibit higher ratios of 2:1 and 3:1 dependent on, among other factors, pH, quinolone structure, and the specific multivalent metal [53,56,57,58]. The energetic favorability of 1:1 chelate formation under the acidic conditions was taken as a quantitative metric for the propensity of FQ–metal interactions that affect bioavailability.

Three-dimensional coordinates of ciprofloxacin were taken from the PubChem public database [59] and imported into the Avogadro molecular modeling interface [60]. The cationic N-protonated species was then constructed and submitted to a conformational search using the MMFF94 force field [61] to locate all pertinent low energy conformers. Starting ciprofloxacin chelate complexes between magnesium, calcium, and aluminum were built and an additional conformational search was performed on the complexes to exhaustively probe the conformational space of the bound water molecules and torsions of the R1 and R7 rings (Figure 1). Recent DFT computations of ciprofloxacin and levofloxacin identified the importance of piperazine ring conformations and potential intramolecular interactions in determining the stability of ground state FQ structures [62].

FQ and FQ–metal chelate structures from the conformational search were then submitted to geometry optimization using the PBE method [63], 6–31G(d) basis set [64,65], and included the D3 dispersion correction with Becke–Johnson dampening [66,67]. This level of theory is denoted as PBE-D3BJ/6–31G(d). Ground state minima were confirmed at the same level of theory with vibrational frequency calculations to ensure zero imaginary frequencies were present in the optimized structures for magnesium, calcium, and aluminum–ciprofloxacin chelates. Frequencies were computed at a temperature of 310 K, matching approximate conditions within the stomach and GIT. Further single-point energies for all optimized structures were computed using PBE-D3BJ/6–31+G(d,p). Aqueous solvation was modeled implicitly using the polarizable continuum model (PCM) [68], denoted as PBE-D3BJ/6–31+G(d,p)/PCM=water. PCM-corrected single-point energies were used to compute the predicted energy of binding (ΔEbind) while the sum of the Gibbs free energy thermal correction and the PCM single-point was used to predict the Gibbs free energy of binding (ΔGbind). All quantum mechanical computations were completed using the Psi4 ab initio quantum chemical computational package [69]. All reported energies are in units of kcal mol−1 (1 hartree = 627.5095 kcal mol−1), and all labeled distances in structural images are Ångstroms (Å) [70]. Computed energies for all compound species are tabulated in Table S3 (Supplementary Materials).

A multitude of literature sources disclose reductions in bioavailability of fluoroquinolone (FQ) antibiotics due to interactions with the multivalent metals magnesium, calcium, and aluminum commonly found in antacids and drug formulations. Of these metals, aluminum is shown to affect pharmacokinetic (PK) parameters the highest. Literature sources for PK studies of FQ–metal interactions and effects on the PK parameters Cmax, AUC, and t1/2 were leveraged to calculate the oral absorption rate constants for thirteen FQs alone in the presence of magnesium, calcium, and aluminum. Rates of absorption were found to generally decrease with concomitant metal administration, with exceptions dependent on the identity of the drug product. Quantum mechanical computations predicted the Gibbs free energy of binding (∆Gbind) of ciprofloxacin to magnesium, calcium, and aluminum ions under aqueous acidic conditions, showing good agreement with trends in relative AUC reduction. Descriptors commonly applied in absorption prediction models (molecular weight, polar surface area, and logP) were identified as poor-to-moderate predictors of AUC reduction of FQs due in the presence of aluminum. The predicted energy of binding (∆Ebind) corresponded well with reductions in bioavailability for a structurally-diverse set of FQs. A straightforward computational metric has been developed to evaluate metal chelation interaction propensity and the magnitude of the resulting diminished bioavailability that may be applied to novel FQs in clinical development.

The authors declare no conflict of interest. D.M.W., M.K., H.H., K.C. and J.V. are the employees of VeriSIM Life. The company had no role in the design of the study; in the collection, analyses, or interpretation of data; in the writing of the manuscript, and in the decision to publish the results. 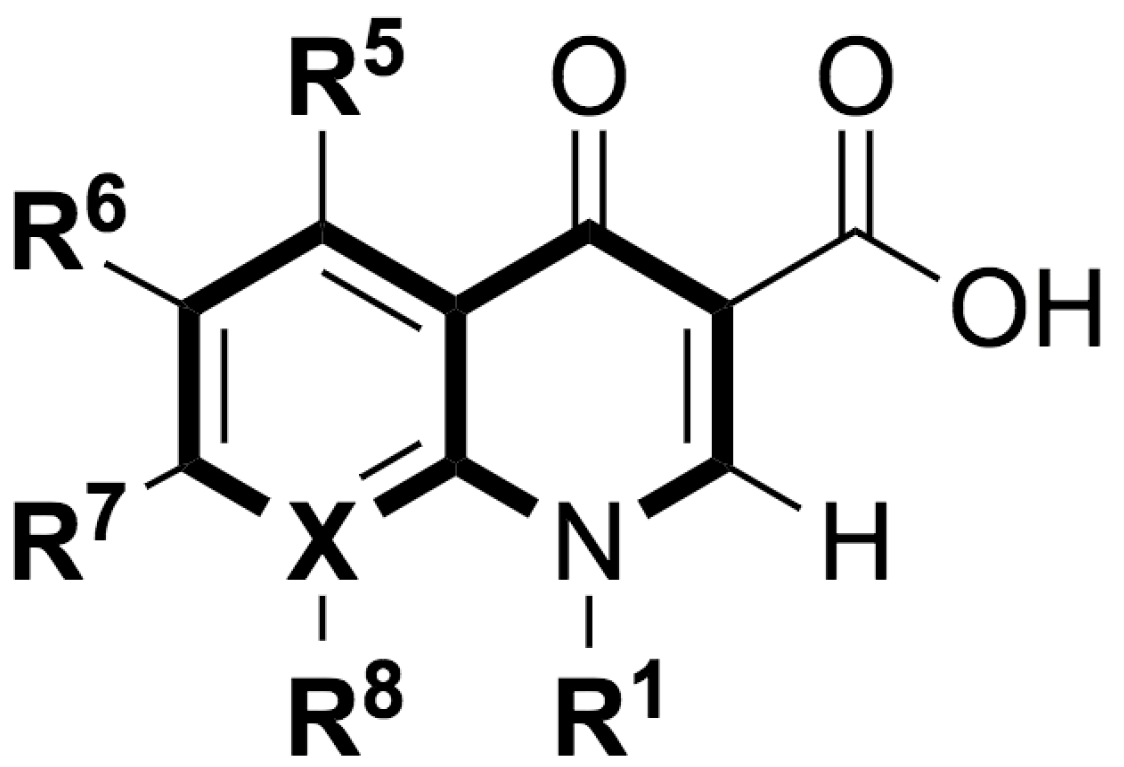