Significance: The majority of the drugs which target membrane-embedded protease γ-secretase show an unusual biphasic activation–inhibition dose-response in cells, model animals, and humans. Semagacestat and avagacestat are two biphasic drugs that can facilitate cognitive decline in patients with Alzheimer’s disease. Initial mechanistic studies showed that the biphasic drugs, and pathogenic mutations, can produce the same type of changes in γ-secretase activity. Results: DAPT, semagacestat LY-411,575, and avagacestat are four drugs that show different binding constants, and a biphasic activation–inhibition dose-response for amyloid-β-40 products in SH-SY5 cells. Multiscale molecular dynamics studies have shown that all four drugs bind to the most mobile parts in the presenilin structure, at different ends of the 29 Å long active site tunnel. The biphasic dose-response assays are a result of the modulation of γ-secretase activity by the concurrent binding of multiple drug molecules at each end of the active site tunnel. The drugs activate γ-secretase by facilitating the opening of the active site tunnel, when the rate-limiting step is the tunnel opening, and the formation of the enzyme–substrate complex. The drugs inhibit γ-secretase as uncompetitive inhibitors by binding next to the substrate, to dynamic enzyme structures which regulate processive catalysis. The drugs can modulate the production of different amyloid-β catalytic intermediates by penetration into the active site tunnel, to different depths, with different flexibility and different binding affinity. Conclusions: Biphasic drugs and pathogenic mutations can affect the same dynamic protein structures that control processive catalysis. Successful drug-design strategies must incorporate transient changes in the γ-secretase structure in the development of specific modulators of its catalytic activity. View Full-Text
Keywords: Alzheimer; semagacestat; avagacestat; molecular dynamics; drug-design; familial Alzheimer’s disease; modulation of enzyme activity Alzheimer; semagacestat; avagacestat; molecular dynamics; drug-design; familial Alzheimer’s disease; modulation of enzyme activity
►▼ Show Figures 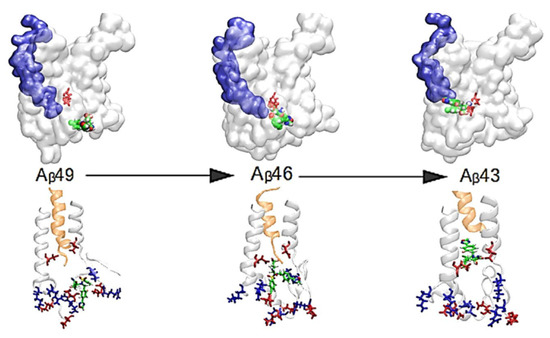 
Svedružić, Željko M., Katarina Vrbnjak, Manuel Martinović, and Vedran Miletić. 2021. "Structural Analysis of the Simultaneous Activation and Inhibition of γ-Secretase Activity in the Development of Drugs for Alzheimer’s Disease" Pharmaceutics 13, no. 4: 514. https://doi.org/10.3390/pharmaceutics13040514