The use of nanocarriers is being researched to achieve oral peptide delivery. Insulin-associated anionic polyelectrolyte nanoparticle complexes (PECs) were formed that comprised hyaluronic acid and chitosan in an optimum mass mixing ratio of 5:1 (MR 5), followed by coating with a pH-dependent polymer. Free insulin was separated from PECs by size exclusion chromatography and then measured by HPLC. The association efficiency of insulin in PECs was >95% and the loading was ~83 µg/mg particles. Dynamic light scattering and nanoparticle tracking analysis of PECs revealed low polydispersity, a negative zeta potential range of −40 to −50 mV, and a diameter range of 95–200 nm. Dissolution studies in simulated small intestinal fluid (FaSSIF-V2) revealed that the PECs were colloidally stable. PECs that were coated with Eudragit® L-100 delayed insulin release in FaSSIF-V2 and protected insulin against pancreatin attack more than uncoated PECs. Uncoated anionic PECs interacted weakly with mucin in vitro and were non-cytotoxic to Caco-2 cells. The coated and uncoated PECs, both concentrated further by ultrafiltration, permitted dosing of 50 IU/kg in rat jejunal instillations, but they failed to reduce plasma glucose or deliver insulin to the blood. When ad-mixed with the permeation enhancer (PE), sucrose laurate (100 mM), the physicochemical parameters of coated PECs were relatively unchanged, however blood glucose was reduced by 70%. In conclusion, the use of a PE allowed for the PEC-released bioactive insulin to permeate the jejunum. This has implications for the design of orally delivered particles that can release the payload when formulated with enhancers. View Full-Text
Keywords: insulin; hyaluronic acid; chitosan; oral peptide delivery; intestinal permeation enhancers; nanomedicine insulin; hyaluronic acid; chitosan; oral peptide delivery; intestinal permeation enhancers; nanomedicine
►▼ Show Figures 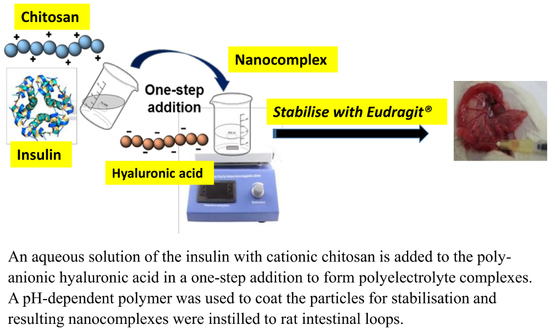