There is a largely divergent body of literature regarding the relationship between Epstein-Barr virus (EBV) infection and brain inflammation in multiple sclerosis (MS). Here, we tested MS patients during relapse (n = 11) and in remission (n = 19) in addition to n = 22 healthy controls to study the correlation between the EBV- and brain-specific B cell response in the blood by enzyme-linked immunospot (ELISPOT) and enzyme-linked immunosorbent assay (ELISA). Cytomegalovirus (CMV) was used as a control antigen tested in n = 16 MS patients during relapse and in n = 35 patients in remission. Over the course of the study, n = 16 patients were untreated, while n = 33 patients received immunomodulatory therapy. The data show that there was a moderate correlation between the frequencies of EBV- and brain-reactive B cells in MS patients in remission. In addition we could detect a correlation between the B cell response to EBV and disease activity. There was no evidence of an EBV reactivation. Interestingly, there was also a correlation between the frequencies of CMV- and brain-specific B cells in MS patients experiencing an acute relapse and an elevated B cell response to CMV was associated with higher disease activity. The trend remained when excluding seronegative subjects but was non-significant. These data underline that viral infections might impact the immunopathology of MS, but the exact link between the two entities remains subject of controversy.
Keywords: B cells; CMV; EBV; ELISPOT; MS B cells; CMV; EBV; ELISPOT; MS

Multiple sclerosis (MS) is an autoimmune disease caused by the infiltration of autoreactive lymphocytes into the central nervous system (CNS). How these lymphocytes become activated against the CNS remains unclear. Several infectious agents have been postulated to trigger the development of autoimmune diseases. The role of Epstein-Barr virus (EBV) in the pathogenesis of MS has been investigated in several clinical trials [1,2,3,4]. EBV, a B-lymphotropic herpes virus, is present in all populations and infects over 90% of individuals before adulthood [5,6].
Once infected, the virus is able to persist in the host in a dormant state for an entire lifetime. Periodically, the virus can be reactivated, at which time the viral replication cycle is initiated and lymphocytes are exposed to viral antigens [7]. Activation and expansion of EBV-specific lymphocytes will then force the virus back into its latent state. If primary infection is delayed beyond the first decade of life, it often results in infectious mononucleosis (IM), a self-limiting disease with flu-like symptoms. Thacker et al. postulated that EBV infection, which manifests itself as IM in adolescents and young adults, constitutes a risk factor for MS [8]. Furthermore, one study showed evidence of EBV infection in a substantial proportion of B cells and plasma cells found in post mortem MS brain tissue [3]. Moreover, there seems to be an increased risk of developing MS when high titers of anti-EBV antibodies are present in the serum [9].
Thus far, the analyses of a correlation between brain reactivity and a positive EBV response were limited due to the fact that there were no reliable parameters reflecting cellular autoimmunity to CNS antigens in MS. In several trials the EBV serum antibody titer has been correlated with clinical and magnetic resonance imaging (MRI) evidence of disease activity [10,11]. The major drawback of these studies was that neither MRI lesions nor the Expanded Disability Status Scale (EDSS) were reflective of the cellular immunity to brain antigens. We have recently introduced an enzyme-linked immunospot (ELISPOT) assay for the detection of brain-specific B cells in the blood of patients with MS. These B cells only occurred in patients with clinically isolated syndrome or definite MS and were absent in healthy donors and in patients with other inflammatory and non-inflammatory neurological diseases as well as other autoimmune disorders [12,13]. In addition, the presence of directly ex vivo detectable brain antigen-specific B cells during relapse was associated with a significantly increased risk of the development of a subsequent relapse within the next few months [13].
In the following, we used this assay to study the correlation between the EBV-, Cytomegalovirus (CMV)- and brain-specific B cell response as detected in the blood of patients with MS. The data show that there was no difference in the EBV-specific B cell response in the blood or the previous viral reactivation status comparing healthy donors and MS patients. Along these lines, the B cell response status to EBV did not have a direct clinical impact on the course and severity of established MS. Interestingly, however, there was an association between the frequencies of CMV- and brain-reactive B cells in the blood and disease activity in MS.

Forty-one patients that were diagnosed with MS according to the 2005 or 2010 McDonald criteria [14,15], respectively, were included in the study. Sixteen of these patients were undergoing an acute MS relapse. Aggravation of persistent disabilities or new clinical symptoms were present for at least 24 h. Exclusion criteria comprised severe accompanying systemic or psychiatric disorders as well as a history of other autoimmune diseases. Subjects who had undergone plasmapheresis or received anti-B cell therapy were also excluded. Details on all patients and healthy control subjects are provided in Table 1 and Table 2. In addition, Table 3 provides information on the immune modulatory treatment of the MS patients included in the study. The research protocol was approved by the institutional ethics committee of the University of Cologne and the Bayerische Landesärztekammer (approval numbers 10–221 and mb BO 14043). For the evaluation of disease severity the EDSS was used [16]. All patients gave written informed consent and were recruited from a MS clinical care unit at the Department of Neurology of the University Hospitals of Cologne, the Department of Neurology, Klinikum Augsburg, Germany and the Department of Neurology, Caritas-Krankenhaus Bad Mergentheim, Germany. Peripheral blood mononuclear cells (PBMC) and plasma samples from healthy controls were obtained from n = 22 volunteers at the participating institutions after written informed consent.

ELISPOT results were compared between the test subject groups with the use of the Wilcoxon rank-sum or Kruskal-Wallis test followed by a Gabriel’s post hoc test. For comparing the mean spot size differences between brain- and virus-specific B cell spots the Wilcoxon rank-sum test was used. Fisher’s exact test was used to assess statistical differences in prevalence rates. p-values that were equal to or less than 0.05 were considered to indicate statistical significance. The correlation between the frequencies of brain- and virus-specific B cells was calculated using Spearman’s rank correlation. Statistical analyses were performed using Prism 6 (GraphPad Software, Inc., La Jolla, CA, USA) and SPSS Statistics 22 (IBM, New York, NY, USA).

PBMC were isolated from healthy controls and MS patients experiencing an acute relapse or in remission, which was, on average, four months after a relapse. PBMC were polyclonally stimulated with R-848, IL-2 and β-mercaptoethanol for 96 h to activate resting B cells [17]. The numbers of EBV- and brain-specific B cells were determined using ELISPOT and plasma antibody titers were quantified in ELISA assays. As a control, we also investigated the cellular and plasma antibody response to CMV.

3.1. There Was No Significant Difference in the EBV-Specific B Cell Activity Comparing Healthy Controls and MS Patients

3.2. The Morphology of Spots Produced by Virus-Specific B Cells Was Similar in Healthy Controls and MS Patients, Hence There Was No Difference in Productivity and the Kinetics of Cell Secretory Activity

3.3. There Was a Correlation between the Frequencies of Virus- and Brain-Reactive B Cells in the Blood of MS Patients

3.4. An Acute MS Relapse Was Not Associated with any Change in the Virus-Specific B Cell Activity, but with a Decrease in Brain-Reactive B Cell Responses Compared to the Remission

3.5. There Was a Trend for a Correlation between the Frequencies of CMV- and Brain-Reactive B Cells in the Blood of MS Patients Experiencing an Acute Relapse when Excluding CMV Seronegative Subjects

It could be argued that the viral seropositivity status might have had an effect on our results presented so far. While all subjects were seropositive for EBV, 11 of 22 healthy controls and 5 of 11 MS patients were positive for CMV. There was no significant difference in the CMV-specific B cell frequencies in CMV seropositive healthy controls and MS patients. Brain-specific B cells were barely detectable in healthy controls, but could be detected in MS patients (Figure 6B,C). Due to the low number of CMV seropositive MS patients experiencing an acute relapse, we could not detect a significant correlation between the frequencies of CMV- and brain antigen-specific B cells in the blood (Figure 6D). However, the tendency remained similar to the data obtained when including all subjects with a Spearman’s rank correlation of 0.5. Furthermore, there was a similar magnitude of the CMV-specific and brain antigen-specific B cell response in relapse and remission after excluding seronegative subjects (Figure 6F,G).

3.6. MS Is Not Associated with the Reactivation of a Latent EBV Infection

Reactivation of latent EBV infection was defined as the simultaneous seropositivity to IgM directed against EBV early antigen (IgM-EA) and IgG directed against EBV nuclear antigen (IgG-EBNA) [19]. A high IgM-EA titer associated with a high IgG-EBNA titer was evident in one healthy control (IgM-EA OD: 0.80; IgG-EBNA OD: 1.25), in one MS patient experiencing an acute relapse (IgM-EA OD: 0.51; IgG-EBNA OD: 1.0) and in one MS patient in remission (IgM-EA OD: 0.50; IgG-EBNA OD: 1.35). The plasma IgM-EA titers in the other MS patients and healthy controls were below an OD of 0.49. Hence, there was no evidence of EBV reactivation (Figure 7).

3.7. There Was a Correlation between the Virus-Specific B Cell Response and Clinical Disease Parameters

The role of EBV infection in MS is a widely debated topic of high clinical relevance. Our study provides small additional support to the theory of a link between EBV infection and MS. However, the two main limitations of our study are that the sample size was limited and CSF was not available to us. Interestingly, however, we noted a correlation between the frequencies of CMV- and brain antigen-specific B cells in the blood of MS patients. These data underline that viral infections might still play an important role in the immunopathology of MS, but the exact link between the two entities remains subject of controversy.

M.W., B.M., C.H. and C.R. performed experimental work. M.W. performed statistical analysis. M.W. and S.K. planned the experiments and wrote the manuscript. P.V.L., M.S., A.B., J.U., M.M. and S.E. have been involved in drafting the manuscript or revising it critically for important intellectual content. All authors read and approved the final manuscript. 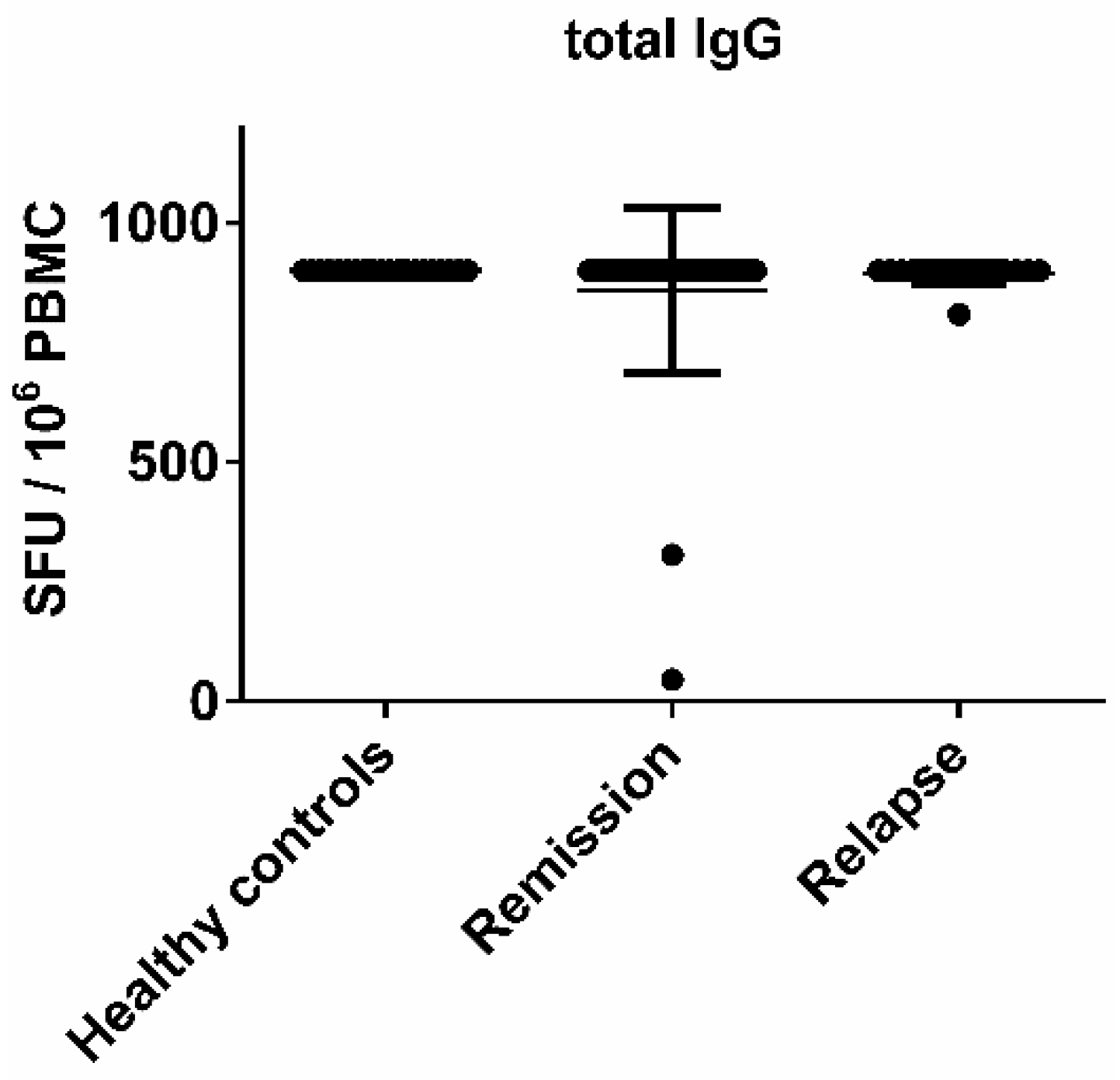 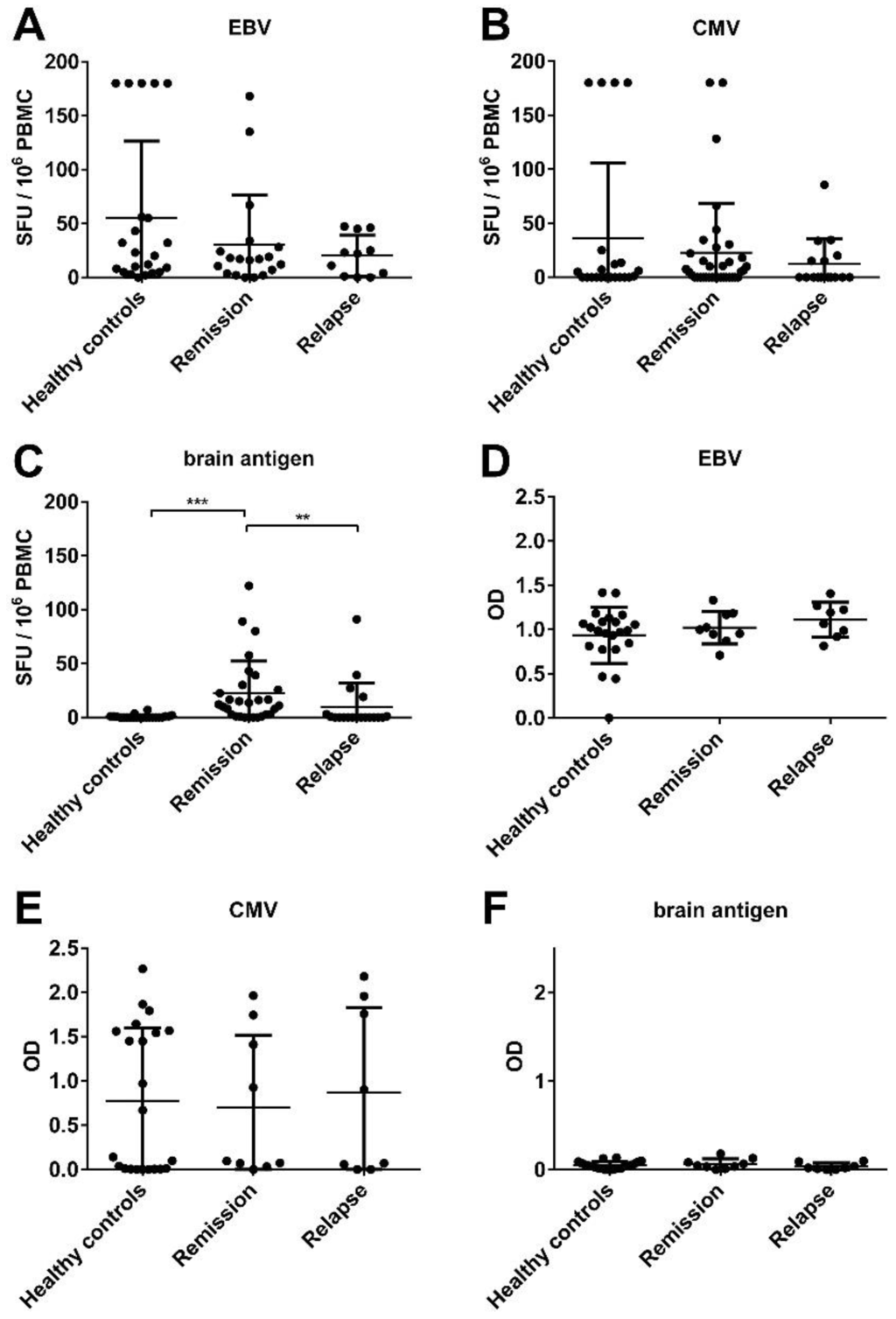 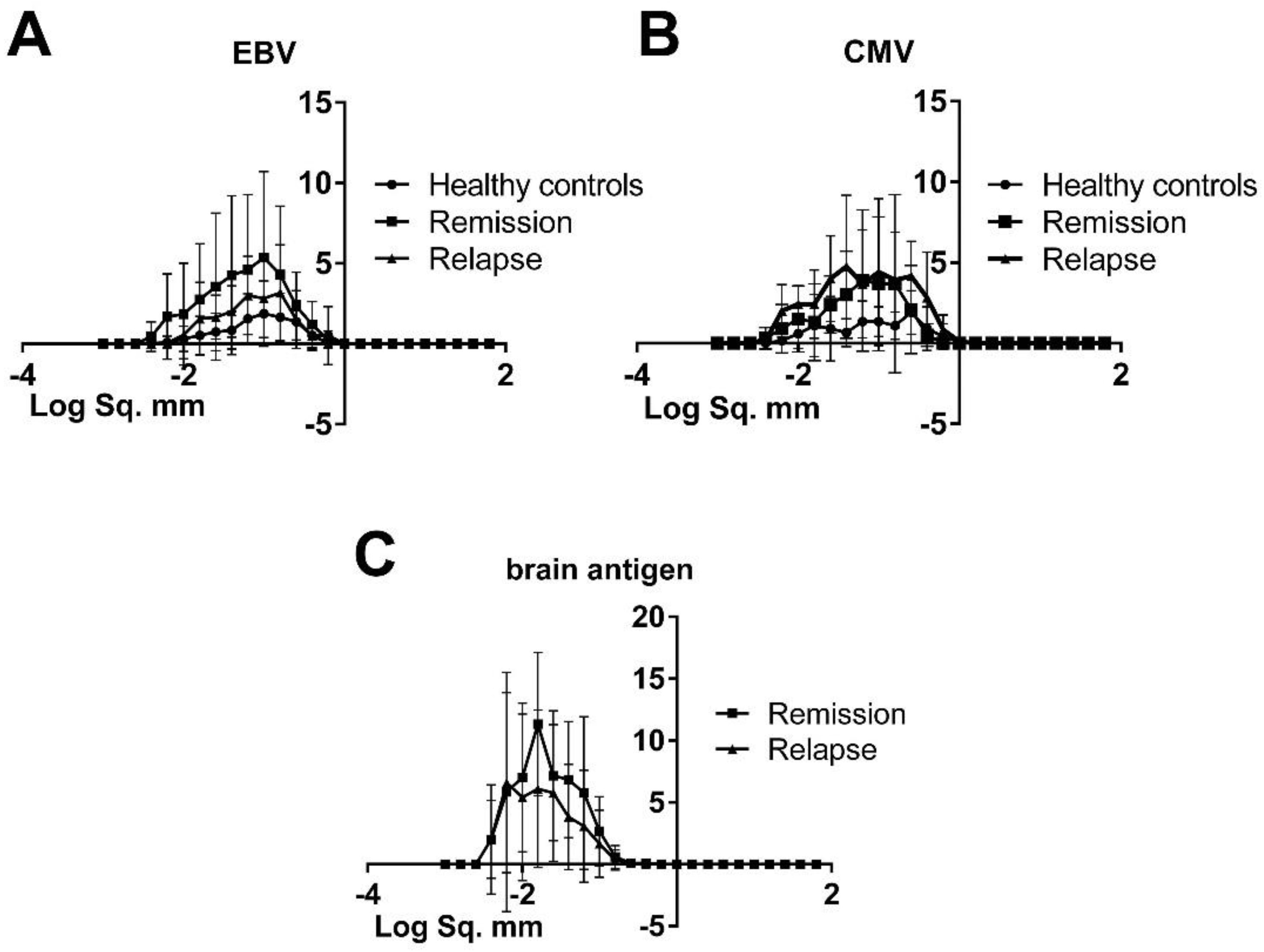 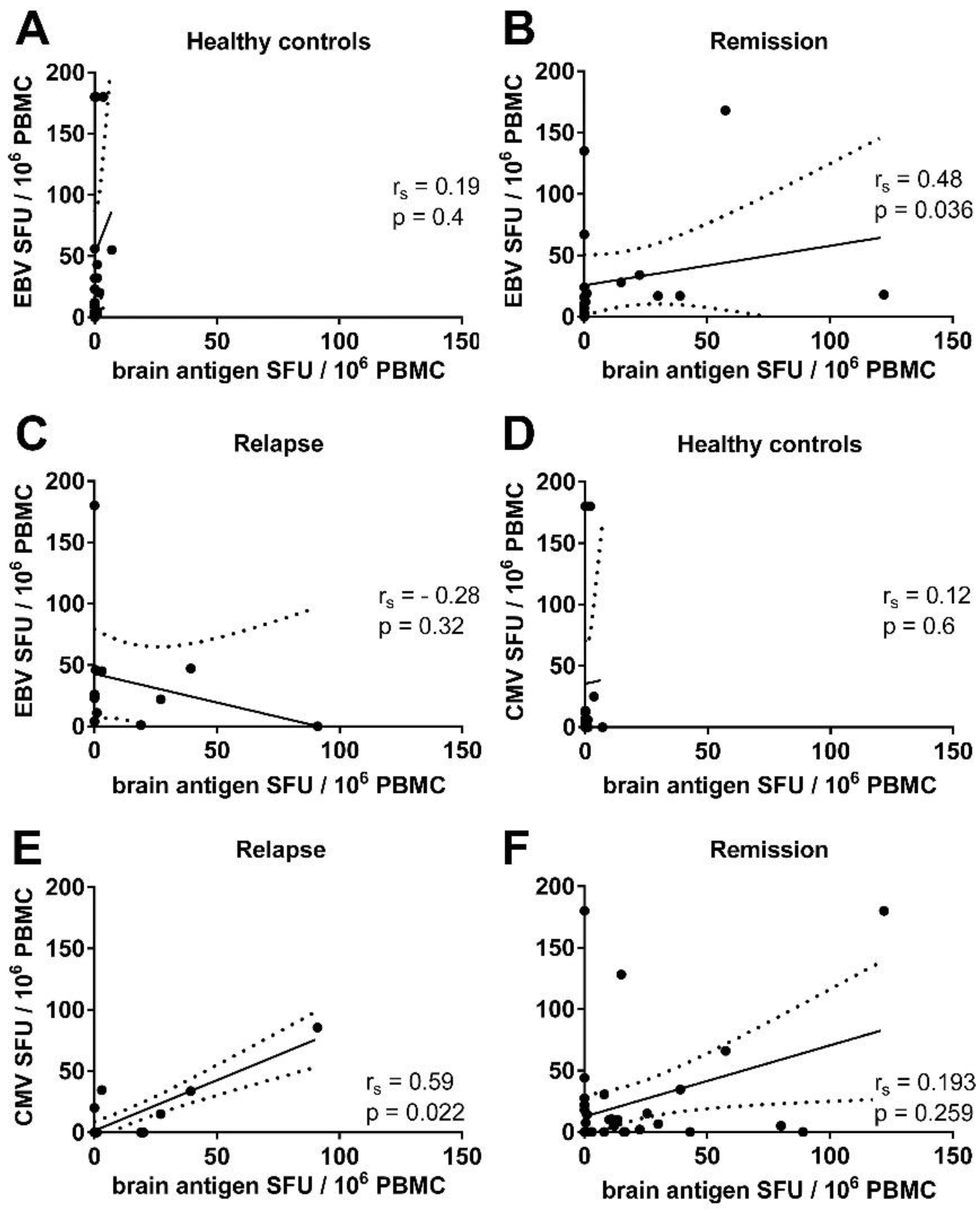 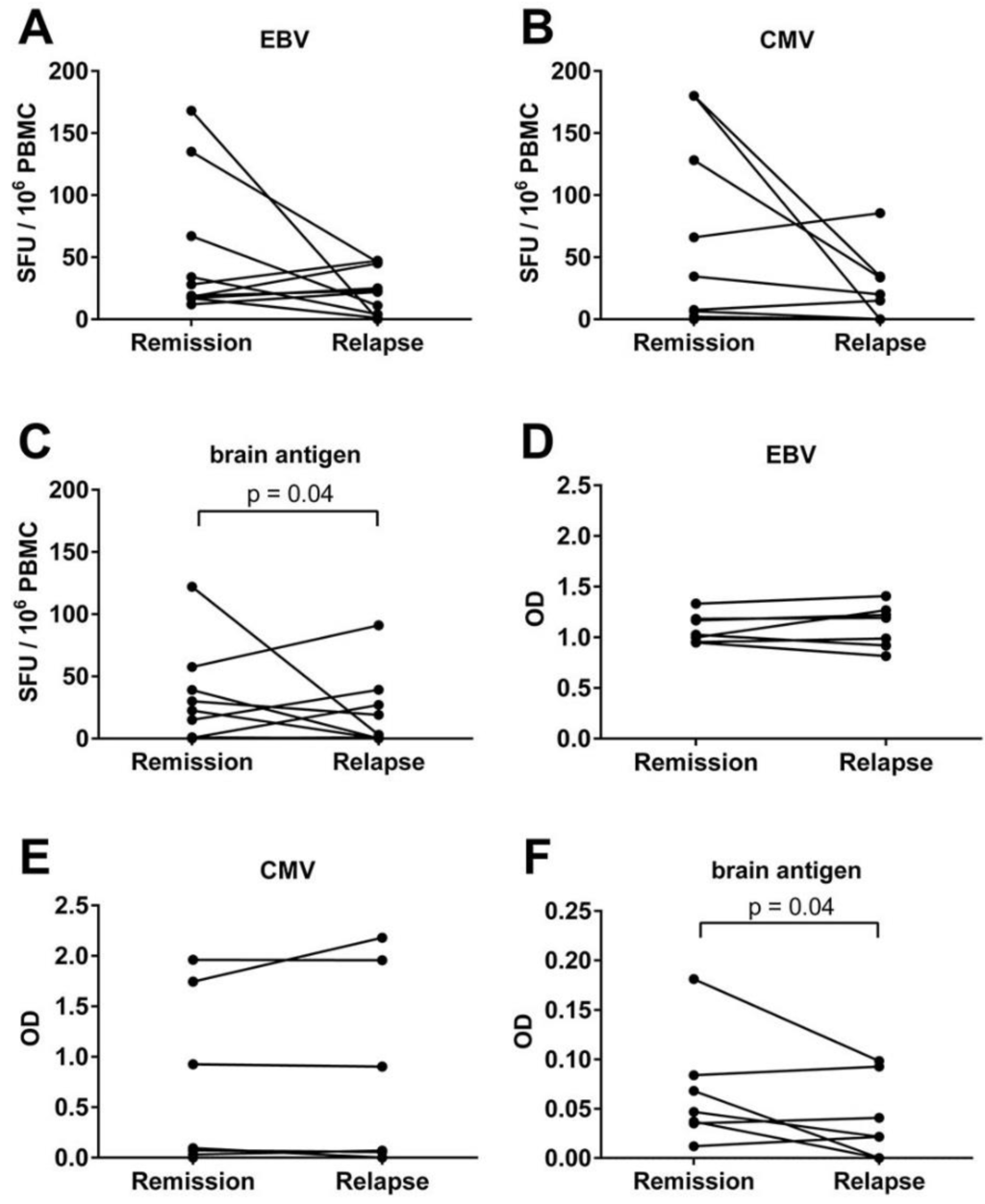 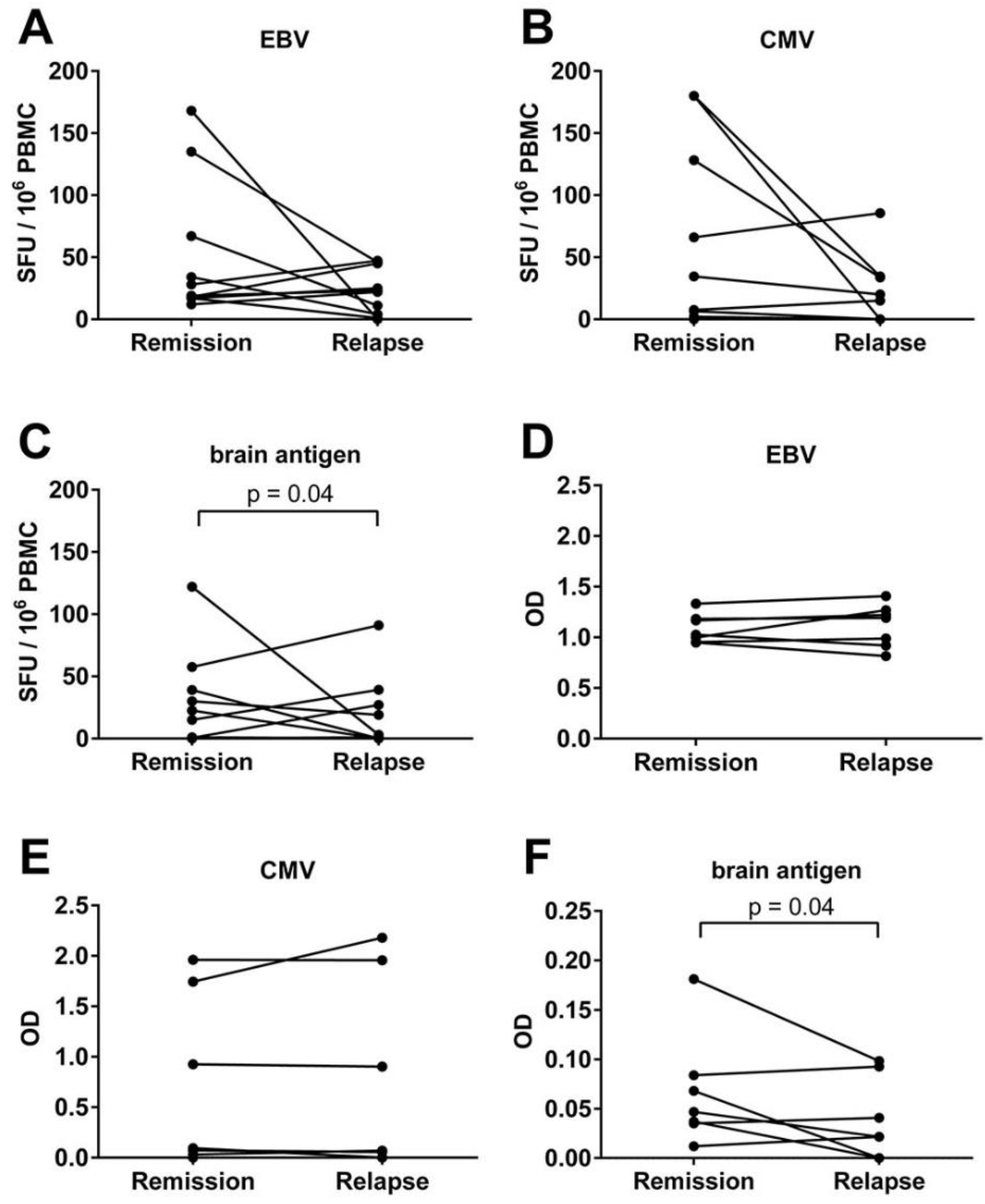 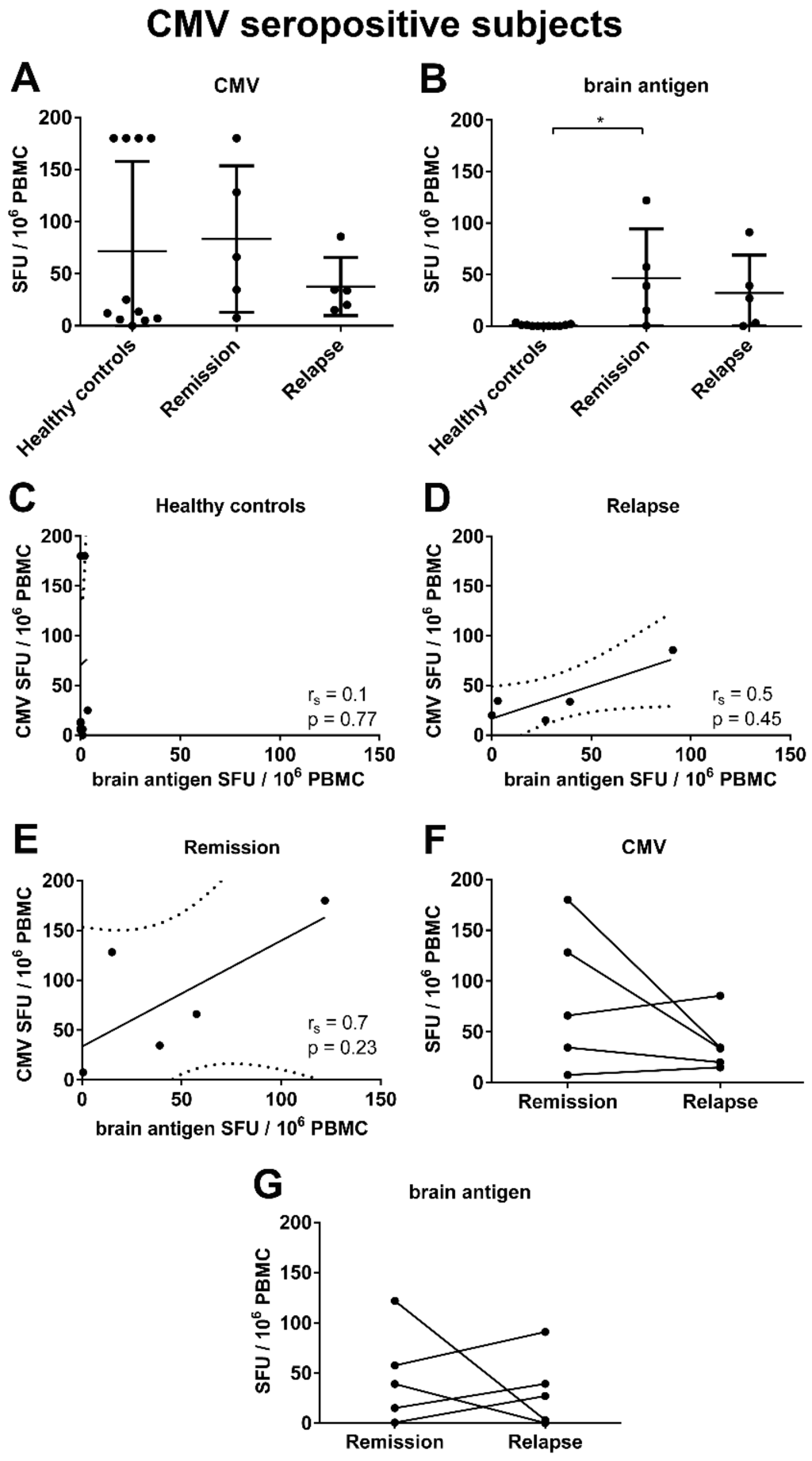 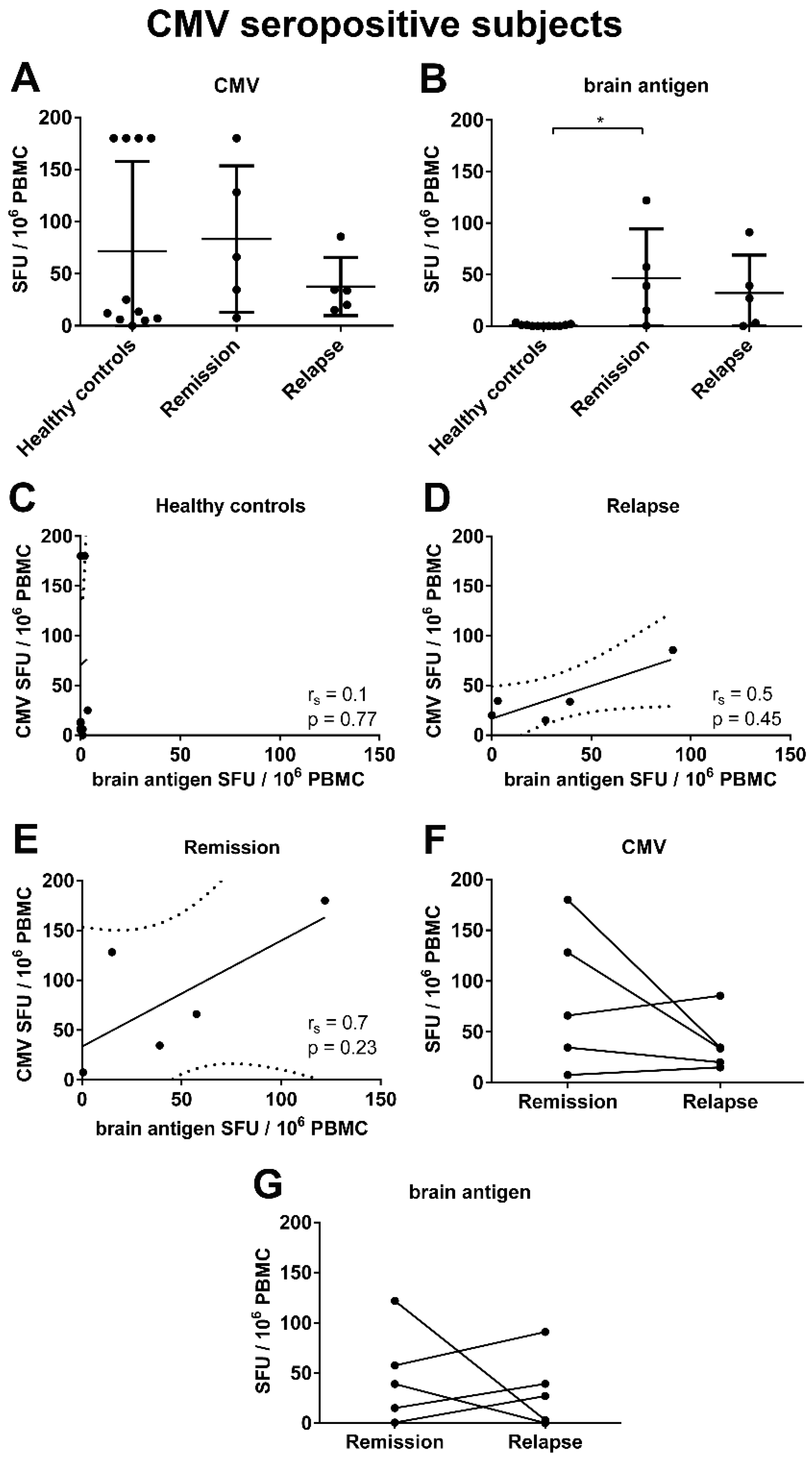 Table 4. Correlation between virus-specific SFU/106 PBMC with clinical parameters.
a Numbers of relapses per year.