Kaposi’s sarcoma associated herpesvirus (KSHV) is etiologically associated with human endothelial cell hyperplastic Kaposi’s sarcoma and B-cell primary effusion lymphoma. KSHV infection of adherent endothelial and fibroblast cells are used as in vitro models for infection and KSHV enters these cells by host membrane bleb and actin mediated macropinocytosis or clathrin endocytosis pathways, respectively. Infection in endothelial and fibroblast cells is initiated by the interactions between multiple viral envelope glycoproteins and cell surface associated heparan sulfate (HS), integrins (α3β1, αVβ3 and αVβ5), and EphA2 receptor tyrosine kinase (EphA2R). This review summarizes the accumulated studies demonstrating that KSHV manipulates the host signal pathways to enter and traffic in the cytoplasm of the target cells, to deliver the viral genome into the nucleus, and initiate viral gene expression. KSHV interactions with the cell surface receptors is the key platform for the manipulations of host signal pathways which results in the simultaneous induction of FAK, Src, PI3-K, Rho-GTPase, ROS, Dia-2, PKC ζ, c-Cbl, CIB1, Crk, p130Cas and GEF-C3G signal and adaptor molecules that play critical roles in the modulation of membrane and actin dynamics, and in the various steps of the early stages of infection such as entry and trafficking towards the nucleus. The Endosomal Sorting Complexes Required for Transport (ESCRT) proteins are also recruited to assist in viral entry and trafficking. In addition, KSHV interactions with the cell surface receptors also induces the host transcription factors NF-κB, ERK1/2, and Nrf2 early during infection to initiate and modulate viral and host gene expression. Nuclear delivery of the viral dsDNA genome is immediately followed by the host innate responses such as the DNA damage response (DDR), inflammasome and interferon responses. Overall, these studies form the initial framework for further studies of simultaneous targeting of KSHV glycoproteins, host receptor, signal molecules and trafficking machinery that would lead into novel therapeutic methods to prevent KSHV infection of target cells and consequently the associated malignancies. View Full-Text
Keywords: KSHV entry; integrins and EphA2R receptors; macropinocytosis; clathrin endocytosis; signal induction; KSHV trafficking KSHV entry; integrins and EphA2R receptors; macropinocytosis; clathrin endocytosis; signal induction; KSHV trafficking
►▼ Show Figures 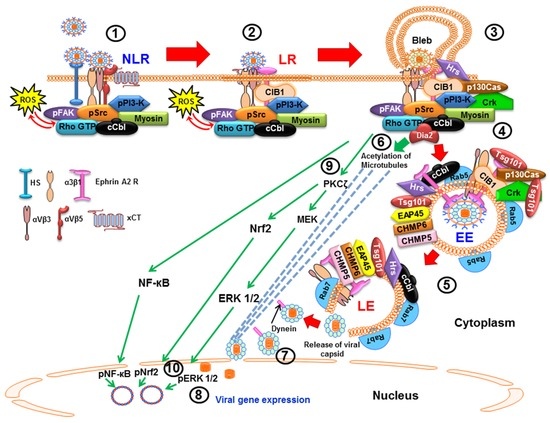