Eradication of HIV-1 from the Macrophage Reservoir: An Uncertain Goal?
Previous Article in Journal

Enterovirus 71 (EV71) is a major causative pathogen of hand, foot and mouth disease with especially severe neurologic complications, which mainly account for fatalities from this disease. To date, the pathogenesis of EV71 in the central neurons system has remained unclear. Cytokine-mediated immunopathogenesis and nervous tissue damage by virus proliferation are two widely speculated causes of the neurological disease. To further study the pathogenesis, we identified a common epitope (co-epitope) between EV71 VP1 and human mediator complex subunit 25 (MED25) highly expressed in brain stem. A monoclonal antibody (2H2) against the co-epitope was prepared, and its interaction with MED25 was examined by ELISA, immunofluorescence assay and Western blot in vitro and by live small animal imaging in vivo. Additionally, 2H2 could bind to both VP1 and MED25 with the affinity constant (Kd) of 10−7 M as determined by the ForteBio Octet System. Intravenously injected 2H2 was distributed in brain stem of mice after seven days of EV71 infection. Interestingly, 2H2-like antibodies were detected in the serum of EV71-infected patients. These findings suggest that EV71 infection induces the production of antibodies that can bind to autoantigens expressed in nervous tissue and maybe further trigger autoimmune reactions resulting in neurological disease. View Full-Text
Keywords: enterovirus 71; common antigen; MED25; neurological disease enterovirus 71; common antigen; MED25; neurological disease
►▼ Show Figures 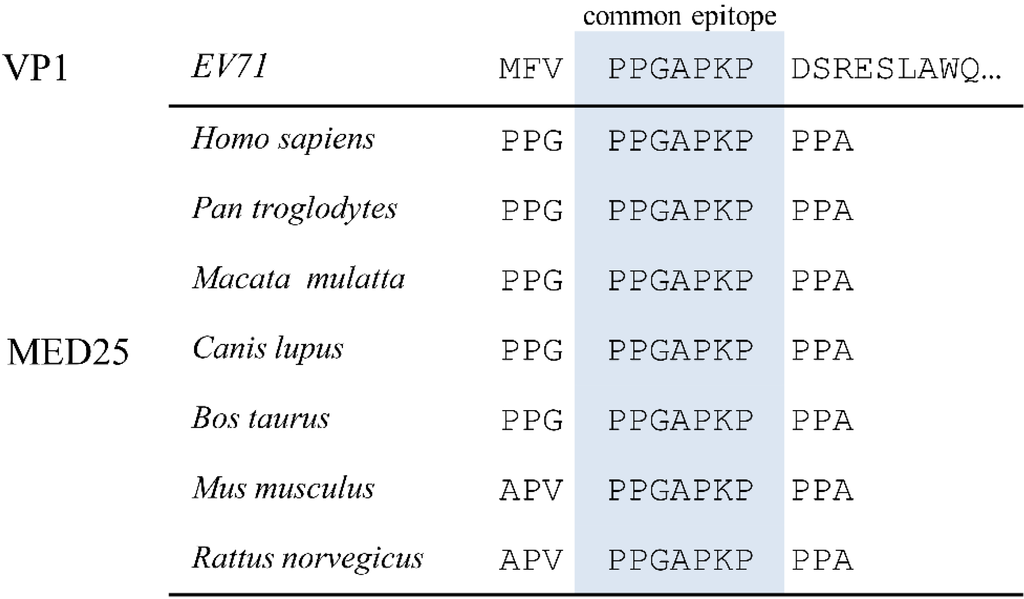