Arenavirus Variations Due to Host-Specific Adaptation

:
Viral hemorrhagic fevers (VHFs) caused by arenaviruses are acute diseases characterized by fever, headache, general malaise, impaired cellular immunity, eventual neurologic involvement, and hemostatic alterations that may ultimately lead to shock and death. The causes of the bleeding are still poorly understood. However, it is generally accepted that these causes are associated to some degree with impaired hemostasis, endothelial cell dysfunction and low platelet counts or function. In this article, we present the current knowledge about the hematological alterations present in VHF induced by arenaviruses, including new aspects on the underlying pathogenic mechanisms.
Keywords:
Hemostasis; endothelium; platelets; megakaryocytes; coagulation; thrombocytopenia; interferon; nitric oxide.

The hemorrhagic complications of the South American HF are almost identical regardless of the virus responsible for the disease and consist mainly of petechiae, conjunctival hemorrhages, and mucosal and gastrointestinal bleeding with melena that usually start after 5 days of illness [10]. Although the number of reported cases of AHF has dramatically declined after the introduction of the attenuated vaccine Candid #1 [11], still remains as the best HF characterized of the South American cases. Therefore, most of the available data presented here are related to this disease.
Different studies in patients with AHF have shown that regardless of the severity of the clinical form of the disease (mild, moderate or severe), the profiles of the coagulation factors during the course of the disease are similar in all patients, indicating that there is no correlation between the severity of the disease and an impairment of coagulation. In addition to thrombocytopenia, the patients present with several alterations in both the blood coagulation and the fibrinolytic systems, but disseminated intravascular coagulation (DIC) has not been demonstrated. The most consistent alterations of the hemostatic system observed in AHF patients during the early stages include a prolongation of partial thromboplastin with low levels of factors VIII, IX and XI but enhanced activity of factor V. The factor VIII procoagulant activity (F VIII:C) and the F VIII:C antigen are low in the early stages of the disease but increase progressively in the later days. In contrast, the levels of von Willebrand factor (vWF) (VIII related antigen) remain high throughout disease progression and return to normal values during the convalescence period. Thrombin/antithrombin complexes (AT) and prothrombin fragment F1 + 2 levels were also increased in patients at admission, indicating the generation of FXa and thrombin. Neither fibrin monomers nor fibrinogen degradation products were detected, indicating that the hemostatic abnormalities in AHF are not associated with DIC. Moreover, the activation of coagulation in AHF appears to be a limited phenomenon because natural inhibitors, such as antithrombin III, protein C and total and free protein S, have been shown to be normal or slightly decreased in these patients [12,13,14] (Table 1 and Figure 1).
Table 1. Hemostatic and vascular alterations in Argentine hemorrhagic fever (AHF).
The fibrinolytic system is also altered in AHF as the tissue plasminogen activator (t-PA) and D-dimer levels are reported to be high, while PAI-1 has been shown to be considerably increased in severe cases. The plasminogen antigen level and functional activity were found to be reduced in the moderate and severe groups. Functional and antigen α2-antiplasmin, α2-macroglobulin and α1-antitrypsin have been shown to be normal or slightly above the normal range [15]. Overall, these data indicate that a low-level but persistent process of blood coagulation and fibrinolysis activation occurs in this viral hemorrhagic disease (Table 1 and Figure 1).
Lassa fever is classified as a HF, but clinical diagnosis is difficult because obvious bleeding is often absent, even late in the course of the illness. Hemorrhagic manifestations, largely limited to the mucosal surfaces, only occur in 1/3 of the patients and are associated with death [16,17]. There is no data showing evidence of DIC in severe Lassa, as coagulation markers are almost always within the normal range. 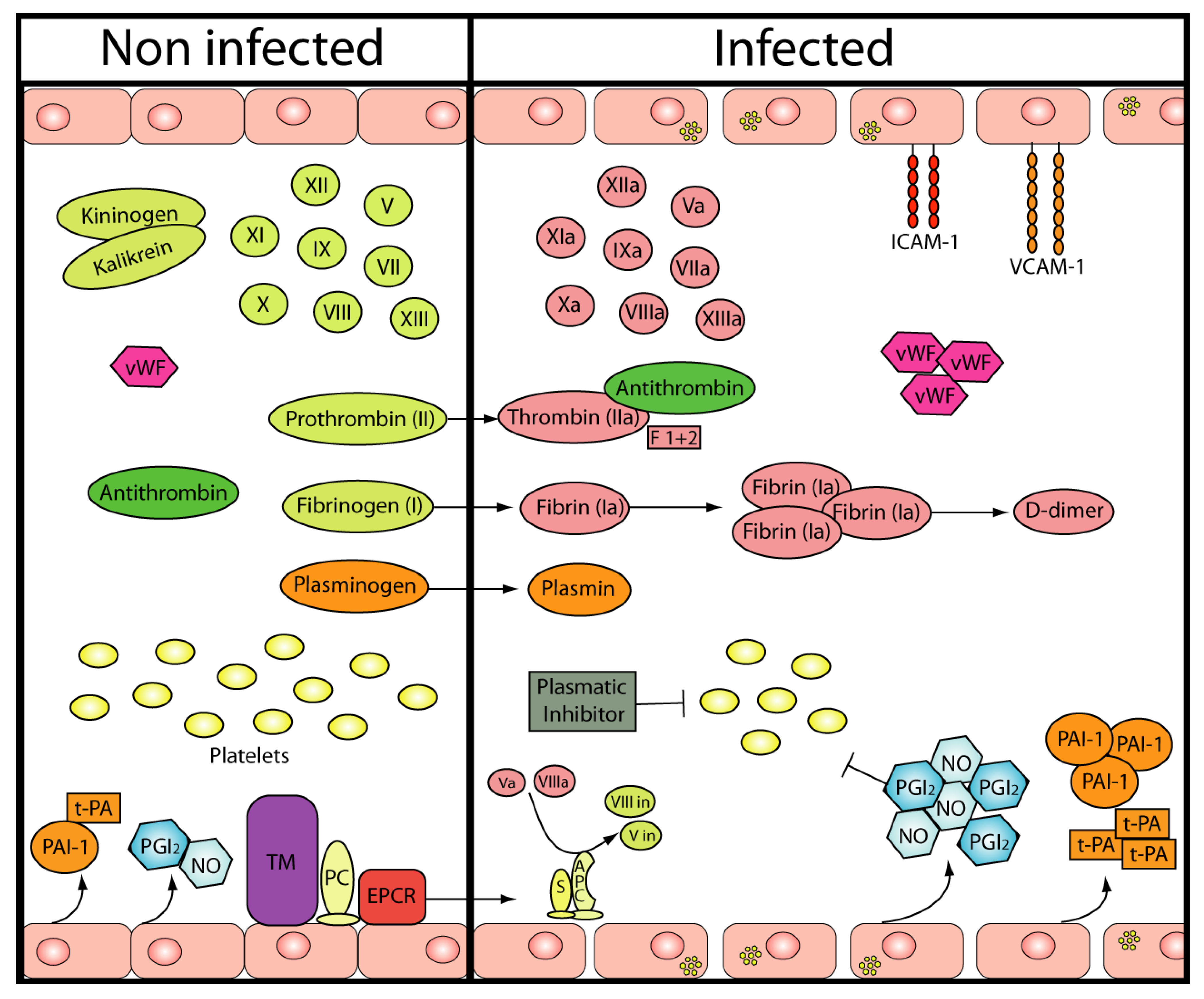 LUJV was identified in 2008 after an outbreak of severe HF in Southern Africa. Although limited data available, it was reported that LUJV-infected patients presented thrombocytopenia and coagulopathy [3]. Interestingly, it was recently demonstrated that after the infection with LUJV, Strain 13/N guinea pigs develop a HF syndrome similar to the disease observed in human patients including pan-leukopenia, thrombocytopenia and profound anemia. Although coagulation studies were not performed, observation of fibrin deposition and hemorrhages in multiple organs together with a marked reduction in platelet counts and tissue damage suggested that DIC was present in LUJV-infected guinea pigs. Moreover, it was suggested that LUJV infection in guinea pigs appears to cause a more severe disease than JUNV or Lassa infection; however, direct comparison studies are required to confirm this hypothesis [18].

Clinical and experimental data indicate that the vascular endothelium is directly or indirectly involved in the pathogenesis of AVHF (reviewed in [9,19]). Although hemorrhages are not a salient feature of Lassa fever, perturbation of vascular function is likely central to Lassa fever pathology; studies in human patients and non-human primates revealed endothelial cell function failure with an impairment of the regulation of vascular permeability preceding the onset of shock and death [20]. Similar findings were shown in a experimental hamster model infected with the new world arenavirus Pichinde (PICV) [21]. However, no specific vascular lesions were observed in a post-mortem examination of fatal human cases of Lassa fever or in non-human primates experimentally infected with LASV [22,23] or in AHF or experimentally JUNV-infected animals (reviewed in [7]). These discrepancies could be related to the fact that despite an estimated 3,000 fatal cases of LF per year in West Africa, there have been relatively few postmortem histologic or immunohistochemical studies.
The receptors for arenaviruses α-dystroglycan and transferrin receptor 1, and the recently described endothelial calcium-dependent lectin (LSECtin), from the C-type lectin family are highly expressed on vascular endothelial cells (EC) [24,25], and productive infection of LASV and JUNV have been observed in vitro in this cell type [26,27]. Moreover, as with other arenaviruses, JUNV and LASV have a non-lytic cell cycle and cause no overt cytopathic effects in cultured vascular EC suggesting that major signs of the associated pathology are mostly attributed to the host response rather than to a direct virus-induced structural damage. [27,28].
A productive infection of EC in culture with JUNV induces the expression of ICAM-1 and, to a lesser extent, VCAM-1 [28]. This up-regulation of the cell adhesion molecules involved in EC activation strictly depended on viral replication, as no effect was observed with a UV-inactivated virus. Because the expression of cell adhesion molecules on the endothelium is a key event in the recruitment of inflammatory leukocytes, it could be possible that the adhesion of activated leukocytes to the endothelium contribute to the increase in vascular permeability in JUNV- and LASSA- infected patients.
In vitro, the infection of EC with JUNV resulted in reduced expression and secretion of coagulation factors, such as the prothrombotic vWF. This finding seems to be in contrast to clinical data showing increased vWF in the sera of AHF patients [14]. These differences could be explained if serum samples had been collected at successive post-infection times and/or if the source of raised vWF serum levels was not only the EC but also megakaryocyte or platelet population. In addition, the infection of EC with a virulent strain of JUNV, but not a non-virulent isolate, markedly induced the production of the vasoactive mediator nitric oxide (NO) and prostacyclin (PGI2) [28], providing a possible link between viral infection and the increased vascular permeability observed in fatal AHF cases. Interestingly, PICV induces microvascular endothelial cell permeability through the production of NO [29], giving further support to the important role of NO in the pathogenesis of the endothelium dysfunction present in AVHF (Table 1 and Figure 1).
The mechanisms by which LASV affects EC biology, including the putative role of NO, are unknown. A perturbation of the endothelium may include direct effects of the virus involving virus infection and gene expression and/or may occur in an indirect manner by a virus-induced release of host-derived factors that affect endothelial function. In this sense, it has been suggested that a deregulated and ineffective cytokine response, leading to high levels of the virus and pro-inflammatory cytokines in the late stage of the disease, is important in the pathogenesis of hemorrhage and shock in Lassa fever [30]. However, the detection of pro-inflammatory cytokines in the sera of patients with fatal Lassa fever has revealed little evidence for a “cytokine storm” associated with lethal diseases [31]. The molecular mechanisms underlying the cytokine deregulation are not yet elucidated but it is suggested that viral infection leads to disruption of early host defenses and contributes to arenavirus pathogenesis. In this context, it has been recently reported that the nucleoprotein encoded by representative members of both, Old and New World arenaviruses interferes with NF-κB activation, possible contributing to the multiple mechanisms by which arenaviruses counteract the host initial innate defenses and subsequent adaptive immune responses [32]. In this sense it has been shown that in the absence of cell damage, a LASV infection in HUVEC resulted in reduced levels of interleukin (IL)-8, a cytokine synthetized through a NF-κB-dependent pathway [27].
Currently, the extent of the infection of the vascular EC by LASV and the consequent effects remain largely unknown.

The authors apologize to the many authors whose papers could not be cited and instead referred to other reviews owing to space limitations. Supported by grants from Agencia Nacional de Promoción Científica y Tecnológica and Glaxo 0009/11. MS, RGP, and RMG are researchers from the Consejo Nacional de Investigaciones Científicas y Técnicas (CONICET). LR is a fellow from CONICET.