Rodents are a speciose group of mammals with strong zoonotic potential. Some parts of Africa are still underexplored for the occurrence of rodent-borne pathogens, despite this high potential. Angola is at the convergence of three major biogeographical regions of sub-Saharan Africa, each harbouring a specific rodent community. This rodent-rich area is, therefore, strategic for studying the diversity and evolution of rodent-borne viruses. In this study we examined 290 small mammals, almost all rodents, for the presence of mammarenavirus and hantavirus RNA. While no hantavirus was detected, we found three rodent species positive for distinct mammarenaviruses with a particularly high prevalence in Namaqua rock rats (Micaelamys namaquensis). We characterised four complete virus genomes, which showed typical mammarenavirus organisation. Phylogenetic and genetic distance analyses revealed: (i) the presence of a significantly divergent strain of Luna virus in Angolan representatives of the ubiquitous Natal multimammate mouse (Mastomys natalensis), (ii) a novel Okahandja-related virus associated with the Angolan lineage of Micaelamys namaquensis for which we propose the name Bitu virus (BITV) and (iii) the occurrence of a novel Mobala-like mammarenavirus in the grey-bellied pygmy mouse (Mus triton) for which we propose the name Kwanza virus (KWAV). This high virus diversity in a limited host sample size and in a relatively small geographical area supports the idea that Angola is a hotspot for mammarenavirus diversity. View Full-Text
Keywords: mammarenaviruses; hantaviruses; Angola; Mastomys natalensis; Micaelamys namaquensis; Mus triton; phylogeny mammarenaviruses; hantaviruses; Angola; Mastomys natalensis; Micaelamys namaquensis; Mus triton; phylogeny
►▼ Show Figures 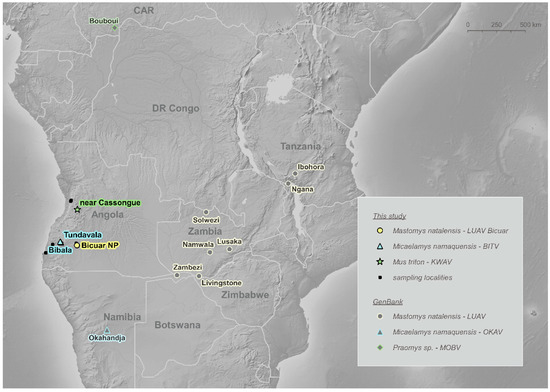