Detection of Porcine Respirovirus 1 (PRV1) in Poland: Incidence of Co-Infections with Influenza A Virus (IAV) and Porcine Reproductive and Respiratory Syndrome Virus (PRRSV) in Herds with a Respiratory Disease
Previous Article in Journal

African swine fever (ASF), caused by a DNA virus (ASFV) belonging to genus Asfivirus of the Asfarviridae family, is one of the most threatening diseases of suids. During last few years, it has spread among populations of wild boars and pigs in countries of Eastern and Central Europe, causing huge economical losses. While local ASF occurrence is positively correlated with wild boar density, ecology of this species (social structure, movement behavior) constrains long-range disease transmission. Thus, it has been speculated that carnivores known for high daily movement and long-range dispersal ability, such as the wolf (Canis lupus), may be indirect ASFV vectors. To test this, we analyzed 62 wolf fecal samples for the presence of ASFV DNA, collected mostly in parts of Poland declared as ASF zones. This dataset included 20 samples confirmed to contain wild boar remains, 13 of which were collected near places where GPS-collared wolves fed on dead wild boars. All analyzed fecal samples were ASFV-negative. On the other hand, eight out of nine wild boar carcasses that were fed on by telemetrically studied wolves were positive. Thus, our results suggest that when wolves consume meat of ASFV-positive wild boars, the virus does not survive the passage through intestinal tract. Additionally, wolves may limit ASFV transmission by removing infectious carrion. We speculate that in areas where telemetric studies on large carnivores are performed, data from GPS collars could be used to enhance efficiency of carcass search, which is one of the main preventive measures to constrain ASF spread. View Full-Text
Keywords: ASF; gray wolf; wild boar; virus transmission ASF; gray wolf; wild boar; virus transmission
►▼ Show Figures 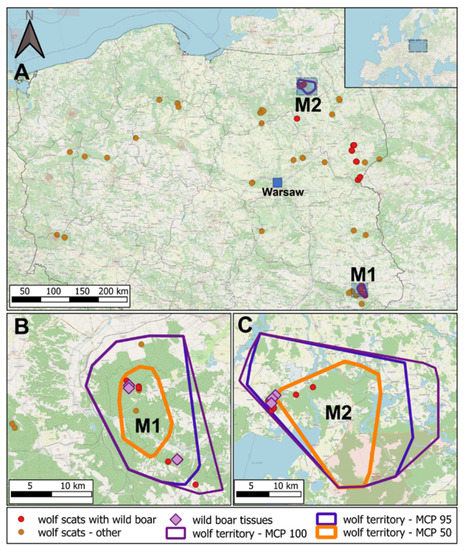