What Should Health Departments Do with HIV Sequence Data?
Previous Article in Journal

To monitor the arthropod-borne virus transmission in mosquitoes, we have attempted both to detect and isolate viruses from 3304 wild-caught female mosquitoes in the Livingstone (Southern Province) and Mongu (Western Province) regions in Zambia in 2017. A pan-flavivirus RT-PCR assay was performed to identify flavivirus genomes in total RNA extracted from mosquito lysates, followed by virus isolation and full genome sequence analysis using next-generation sequencing and rapid amplification of cDNA ends. We isolated a newly identified Barkedji virus (BJV Zambia) (10,899 nt) and a novel flavivirus, tentatively termed Barkedji-like virus (BJLV) (10,885 nt) from Culex spp. mosquitoes which shared 96% and 75% nucleotide identity with BJV which has been isolated in Israel, respectively. These viruses could replicate in C6/36 cells but not in mammalian and avian cell lines. In parallel, a comparative genomics screening was conducted to study evolutionary traits of the 5′- and 3′-untranslated regions (UTRs) of isolated viruses. Bioinformatic analyses of the secondary structures in the UTRs of both viruses revealed that the 5′-UTRs exhibit canonical stem-loop structures, while the 3′-UTRs contain structural homologs to exoribonuclease-resistant RNAs (xrRNAs), SL-III, dumbbell, and terminal stem-loop (3′SL) structures. The function of predicted xrRNA structures to stop RNA degradation by Xrn1 exoribonuclease was further proved by the in vitro Xrn1 resistance assay. View Full-Text
Keywords: Barkedji virus; Barkedji-like virus; dISFVs; 5′-UTR; 3′-UTR; RNA secondary structure Barkedji virus; Barkedji-like virus; dISFVs; 5′-UTR; 3′-UTR; RNA secondary structure
►▼ Show Figures 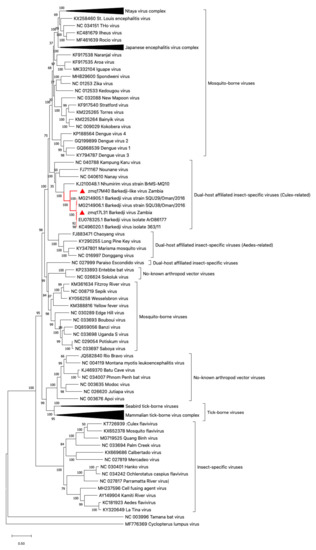