High-throughput approaches have opened new opportunities for understanding biological processes such as persistent virus infections, which are widespread. However, the potential of persistent infections to develop towards pathogenesis remains to be investigated, particularly with respect to the role of host metabolism. To explore the interactions between cellular metabolism and persistent/pathogenic virus infection, we performed untargeted and targeted metabolomic analysis to examine the effects of Cricket paralysis virus (CrPV, Dicistroviridae) in persistently infected silkworm Bm5 cells and acutely infected Drosophila S2 cells. Our previous study (Viruses 2019, 11, 861) established that both glucose and glutamine levels significantly increased during the persistent period of CrPV infection of Bm5 cells, while they decreased steeply during the pathogenic stages. Strikingly, in this study, an almost opposite pattern in change of metabolites was observed during different stages of acute infection of S2 cells. More specifically, a significant decrease in amino acids and carbohydrates was observed prior to pathogenesis, while their abundance significantly increased again during pathogenesis. Our study illustrates the occurrence of diametrically opposite changes in central carbon mechanisms during CrPV infection of S2 and Bm5 cells that is possibly related to the type of infection (acute or persistent) that is triggered by the virus. View Full-Text
Keywords: metabolomics; persistent infection; host metabolism; Cricket paralysis virus; central carbon metabolism metabolomics; persistent infection; host metabolism; Cricket paralysis virus; central carbon metabolism
►▼ Show Figures 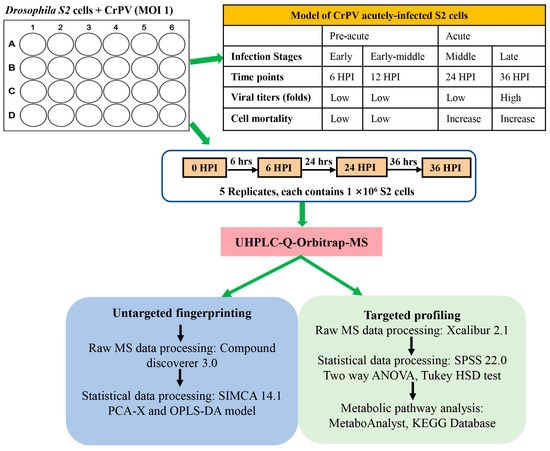