Animals as Reservoir for Human Norovirus

Characterization of Mutational Tolerance of a Viral RNA–Protein Interaction

Replication of RNA viruses is generally markedly error-prone. Nevertheless, these viruses usually retain their identity under more or less constant conditions due to different mechanisms of mutation tolerance. However, there exists only limited information on quantitative aspects of the mutational tolerance of distinct viral functions. To address this problem, we used here as a model the interaction between a replicative cis-acting RNA element (oriL) of poliovirus and its ligand (viral protein 3CD). The mutational tolerance of a conserved tripeptide of 3CD, directly involved in this interaction, was investigated. Randomization of the relevant codons and reverse genetics were used to define the space of viability-compatible sequences. Surprisingly, at least 11 different amino acid substitutions in this tripeptide were not lethal. Several altered viruses exhibited wild-type-like phenotypes, whereas debilitated (but viable) genomes could increase their fitness by the acquisition of reversions or compensatory mutations. Together with our study on the tolerance of oriL (Prostova et al., 2015), the results demonstrate that at least 42 out of 51 possible nucleotide replacements within the two relevant genomic regions are viability-compatible. These results provide new insights into structural aspects of an important viral function as well as into the general problems of viral mutational robustness and evolution. View Full-Text
Keywords: poliovirus; RNA; cis-elements; RNA/protein interaction; protease 3C; nucleotide/amino acid sequences; randomization; SELEX; mutational robustness; viability poliovirus; RNA; cis-elements; RNA/protein interaction; protease 3C; nucleotide/amino acid sequences; randomization; SELEX; mutational robustness; viability
►▼ Show Figures 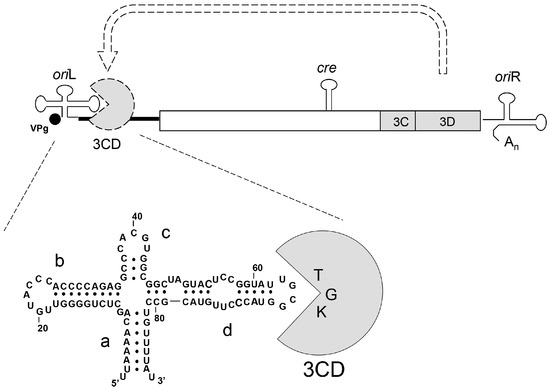