Soil Chemical Attributes, Biometric Characteristics, and Concentrations of N and P in Leaves and Litter Affected by Fertilization and the Number of Sprouts per the Eucalyptus L’Hér. Strain in the Brazilian Cerrado

The productivity of forests is often considered to be limited by the availability of phosphorus (P). Knowledge of the role of organic and inorganic P in humid subtropical forest soils is lacking. In this study, we used chemical fractionation and 31P nuclear magnetic resonance (NMR) spectroscopy to characterize the form of P and its distribution in undisturbed perhumid Taiwan false cypress (Chamaecyparis formosensis Matsum.) forest soils. The toposequence of transects was investigated for the humic layer from summit to footslope and lakeshore. The clay layer combined with a placic-like horizon in the subsoil may affect the distribution of soil P because both total P and organic P (Po) contents in all studied soils decreased with soil depth. In addition, Po content was negatively correlated with soil crystalline Fe oxide content, whereas inorganic P (Pi) content was positively correlated with soil crystalline Fe oxide content and slightly increased with soil depth. Thus, Pi may be mostly adsorbed by soil crystalline Fe oxides in the soils. Among all extractable P fractions, the NaOH-Po fraction appeared to be the major component, followed by NaHCO3-Po; the resin-P and HCl-Pi fractions were lowest. In addition, we found no typical trend for Pi and Po contents in soils with topographical change among the three sites. From the 31P-NMR spectra, the dominant Po form in soils from all study sites was monoesters with similar spectra. The 31P-NMR findings were basically consistent with those from chemical extraction. Soil formation processes may be the critical factor affecting the distribution of soil P. High precipitation and year-round high humidity may be important in the differentiation of the P species in this landscape. View Full-Text
Keywords: Chamaecyparis forest; humic substances; 31P nuclear magnetic resonance spectroscopy (31P NMR); P species; topography Chamaecyparis forest; humic substances; 31P nuclear magnetic resonance spectroscopy (31P NMR); P species; topography
►▼ Show Figures 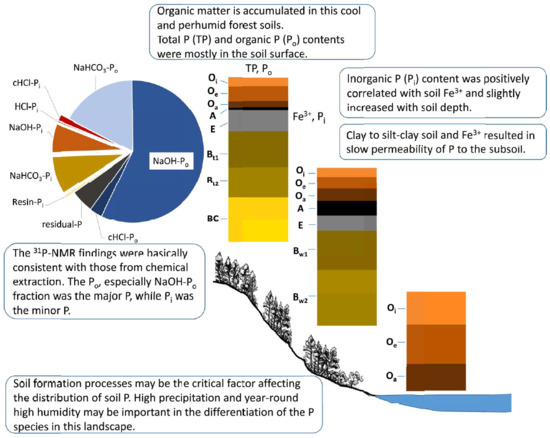